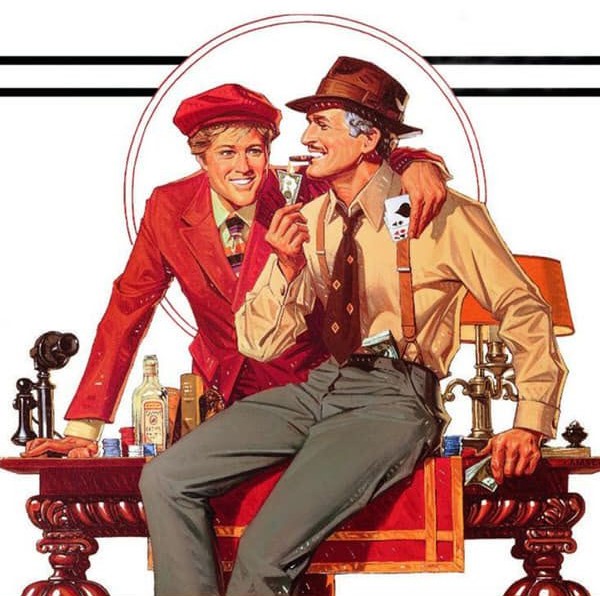 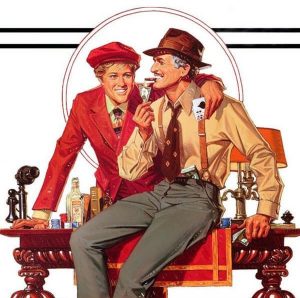 The symposium was not open to the public but did include a list of invitees including politicians, Cyber experts, and the media.

Let’s roll back to November and the night of the election.  Many patriots were paying attention to Q drops and followed the trail to a SCIF (Sensitive Compartmented Information Facility) inside the Eisenhower Building in WA DC. (Looks like a chess board, doesn’t it!)  the Cyber Security team watched the election results in real time knowing in advance that there would be a major attempt to steal the election.

Trump has always been transparent in his strategy derived from his book, The Art of the Deal.  Trump knows how to set a board and he uses his assets wisely.  Remember, war, like chess requires moves and counter moves and the ability to predict your enemy’s next move.

Per TheWatchTowers.org, “They knew which states were using the voting machines loaded with HAMMER & SCORECARD.  (Software developed for the CIA to manipulate voter tallies remotely in foreign elections.) It was just deployed against the American people.  Tom Fitton & Sidney Powell put it right in your face”!

“The SCOTUS ordered all ballots received after the deadline in PA be segregated from those received on time.  And now, we’ve had active audits to prove what was already known”.  Some tampering was caught on camera with individuals pulling out additional ballots after closing the center to the public. Footage was shown of trucks showing up in the middle of the night dropping off cases of additional ballots long after the polling locations were closed.  Due to the obvious tampering, when forensic audits were ordered, each station was monitored from above the table and the room was locked off and monitored from multiple cameras in the stadium.  This time, there would be no more cheating.

Mike Lindell, Juan O’Savin, Dr. Charlie Ward (Insider), General Flynn and other patriots already knew the election was stolen, including President Trump and probably most of you reading this article.  I watched in horror as the vote tally changed on TV in real time on election night. It was clear something was wrong. Since when do voter numbers go down instead of up?

An alleged note from Trump to Biden went Viral early this year.  Whether or not it is true is not the issue, because we know! 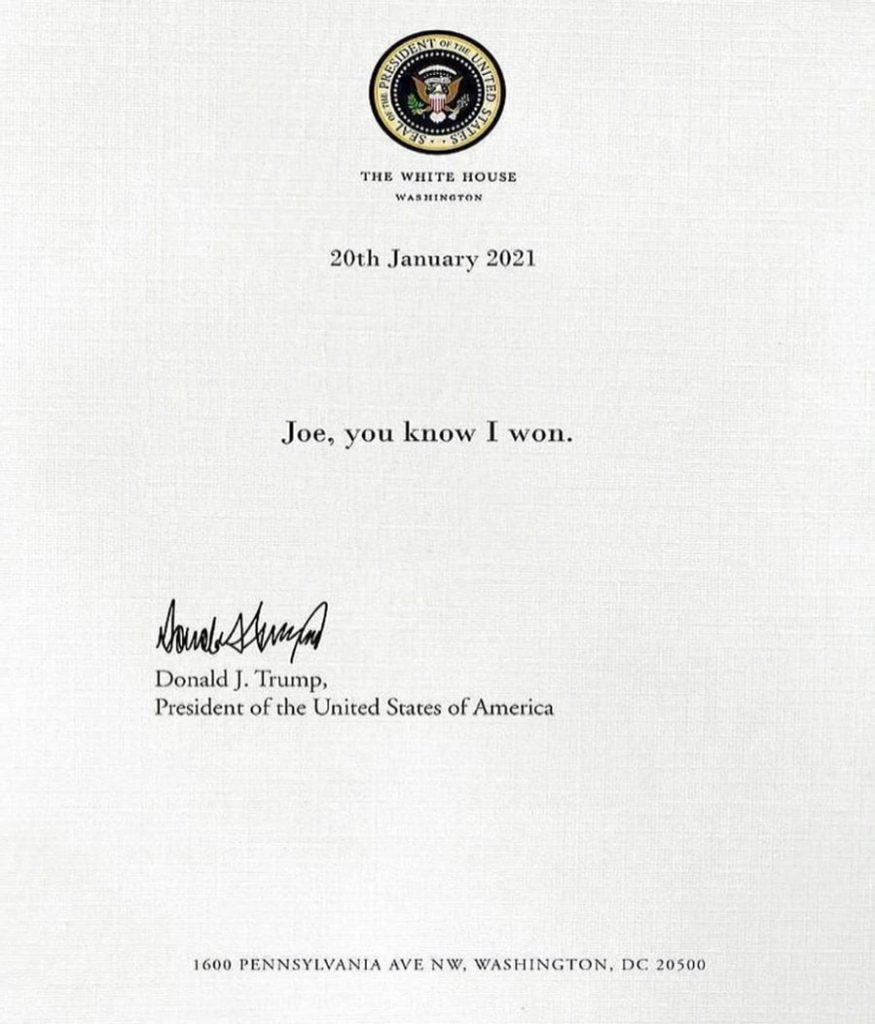 Mike Lindell has been stating he had the PCAPS or Network Packet Captures of the election for months.  He set up the symposium for several reasons:

What Lindell was claiming prior to the symposium caused multiple cyber-attacks from those trying to gain access to the data.  He was allegedly physically attacked at his hotel. The Symposium event was pumped by multiple appearances on TV and over social media to make the dark hats believe he had the PCAPS.

But it was all a very well-planned sting operation lead by retired Col Phil Waldren who has over 20 years in cyber security for the military.  He and his team were at the symposium to intercept the hacking attempts.  Two planes equipped with electronic monitoring systems were also tracking the activity from above.

He allowed them to hack the Cyber Symposium to try and get the data.  Col Waldren’s team was in place and able to intercept the hacking attempt which led right to the perpetrators (Perp-E-Traitors) catching them red handed.  Col Waldren’s team predicted that Deep State operatives would attempt hacking to get at Mike Lindell’s Data Packs. They did not disappoint, and in so doing, exposed themselves and walked right into his trap.    Oh Snap!! 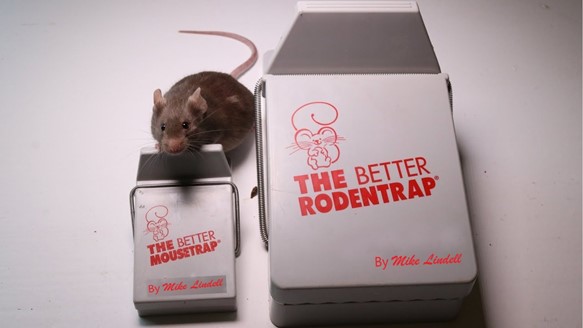 The data was already in hand by the military who were watching and recording what was transpiring from  SCIF at the Eisenhower building on Election night.  Do you remember Sidney Powell’s Kraken, the 155th battalion and the shootout in Frankfurt Germany?  A raid by US Army forces on a CIA server in Frankfurt, Germany was first brought up, Nov. 12, by Congressman Louie Gohmert (R-TX1) on Newsmax’s Chris Salcedo show. The raid occurred the weekend of Nov. 7.  The servers contained data on the presidential election.

The SCIF data from election night was allegedly declassified and given to Mike Lindell at the direction of President Trump and put on the screen for all to see during the symposium.  No one other than Trump and Ezra Cohen-Watnick had the ability release the information.  But it never happened. The military had already known everything since November 3, 2020.

What will happen to Joe Biden now that each state knows the election results were fraud?

After the election, the Defense Department rejected requests from the Biden team despite a General Services Administration decision on Nov. 23 that cleared the way for federal agencies to meet with representatives of the incoming administration.

An “unscientific poll” conducted by Sharyl Attkisson in March of 2021 showed 92% of those who participated say Trump won the election or Biden won by fraud.

Per Great News International on Dec. 1, 2020, Joe Biden is preparing to concede the election and was reaching out to Trump to negotiate a pardon for all the crimes committed by himself and his family members. 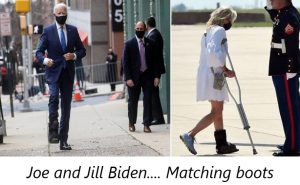 “Biden appears to be wearing an ankle bracelet although like John McCain, he claims to have fractured his foot while walking his dog.  Allegation that Biden is willing to concede in exchange for a pardon is not yet confirmed”. Please keep in mind that this is “here say” so take it with a grain of salt.

In his press speech he lays out that he has a sworn oath to defend the United States Constitution against the wartime “siege” that’s under way:

“As President I have no higher duty than to defend the laws and the constitution of the United States. That is why I am determined to protect our election system, which is now under coordinated assault and siege”.

Trump invoked the legal framework – and national security provisions – allowing Secretary of Defense Chris Miller to activate the military processes that will result in a tactical takedown of domestic enemies and traitors.

The best result from Mike Lindell’s sting operations was getting election officials to finally see the extent of the election fraud and just how easy it was to hack the system. It was even demonstrated during the symposium. You can watch it demonstrated in this video – A hacker only needs 1 minute to change election results in 24 states. Watch how vulnerable our voting machines really are.

Some of the state officials took to the stage and vowed to go home to their home state and make needed changes to protect election integrity.  There were attorneys present at the symposium who told them what they needed to do and Senator Wendy Rogers of Arizona has already created an Election Integrity Caucus consisting of legislators from all 50 states.

But there is a history of Election tampering that is not often shown in mainstream media, including the election of 2016. 2016 SMARTMATIC VOTER FRAUD: “I’ll be meeting with Soros later this week for some ‘pre-programming’ of machines” Email Ties Donna Brazil, John Podesta and Todd Macklerr… 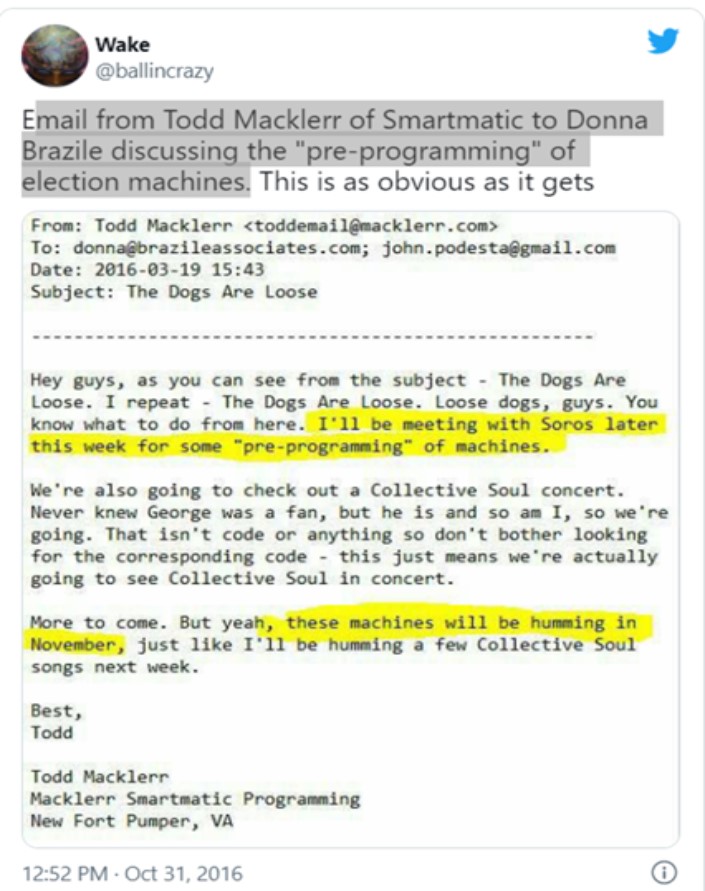 Despite heavy handed attempts to censor any news about Election Fraud there were regular reports through social media that could not be stopped. Here are just a handful of articles with evidence of election tampering in multiple states:

Truck with ‘fake ballots’ seized in US

She illegally destroyed ballots in 2016. Now the Florida GOP w

And what about this peach? Georgia Video Footage Shows Poll Workers Staying Behind, Producing Boxes of Ballots

Something cheesy in Philadelphia – Truck with ‘fake ballots’ seized in

And what about all the people who were arrested for Ballot Harvesting, dumping ballots or delivering ballots after the close of the polls? 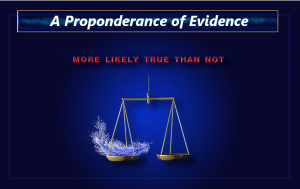 Under the preponderance standard, the burden of proof is met when the party with the burden convinces the fact finder that there is a greater than 50% chance that the claim is true. It should be clear to all that this election was indeed stolen with the help of local employees at the voting centers, politicians and by foreign agents using cyber technology.

President John F Kennedy had foreseen that America might one day be involved in a different form of warfare in the future. He established special procedures and defense mechanisms to counteract this new kind of warfare.  The Kennedy Irregular Warfare Center was created to gather intel and to be prepared for such an event.  With the development and growth of the global internet, it is critically important to have trusted people keeping an eye on world events and foreign influences on American elections and business affairs.  Ezra Cohen-Watnick and the rest of the Trump team have fulfilled JFK’s wishes.

None of us know exactly what this will mean for America in the coming weeks, months, or years, but we remain hopeful that enough was done to expose Deep State players for who and what they are, which will lead to their fall from power.  Only then will we move onto a better timeline for America and every other country wishing for true freedom.

We have this hopeful reminder from the United States Supreme Court – 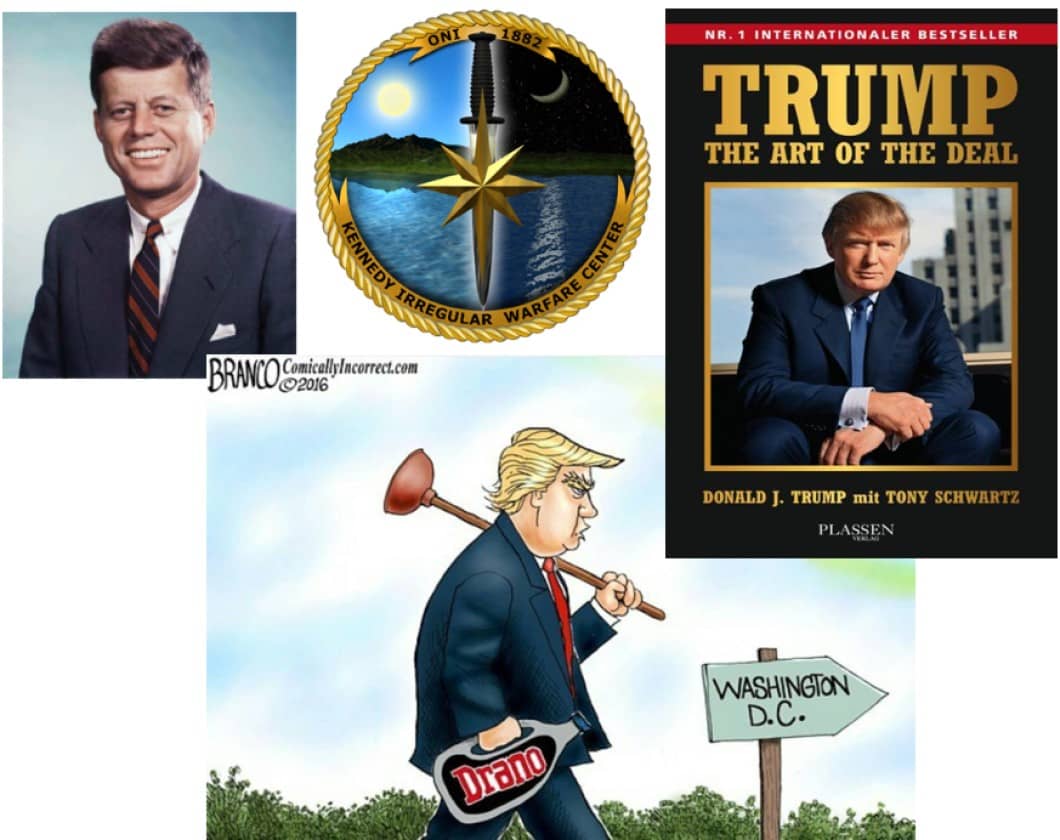 Election Fraud Is a More Serious Issue Than You Think

Let’s be very clear about the 2020 election outcome: “FRAUD VITIATES EVERYTHING”.

Special thanks to Phil Godlewski who’s wonderful assessment of the Symposium lead to this article and to the PFC Media Ninjas who followed the Covid-19 and the Election Fraud diligently to discuss what we were witnessing on the Weekend Awakenings talk show.

Election Fraud Is a More Serious Issue Than You Think

Let’s be very clear about the 2020 election outcome: “FRAUD VITIATES EVERYTHING”.

Special thanks to Phil Godlewski who’s wonderful assessment of the Symposium lead to this article!