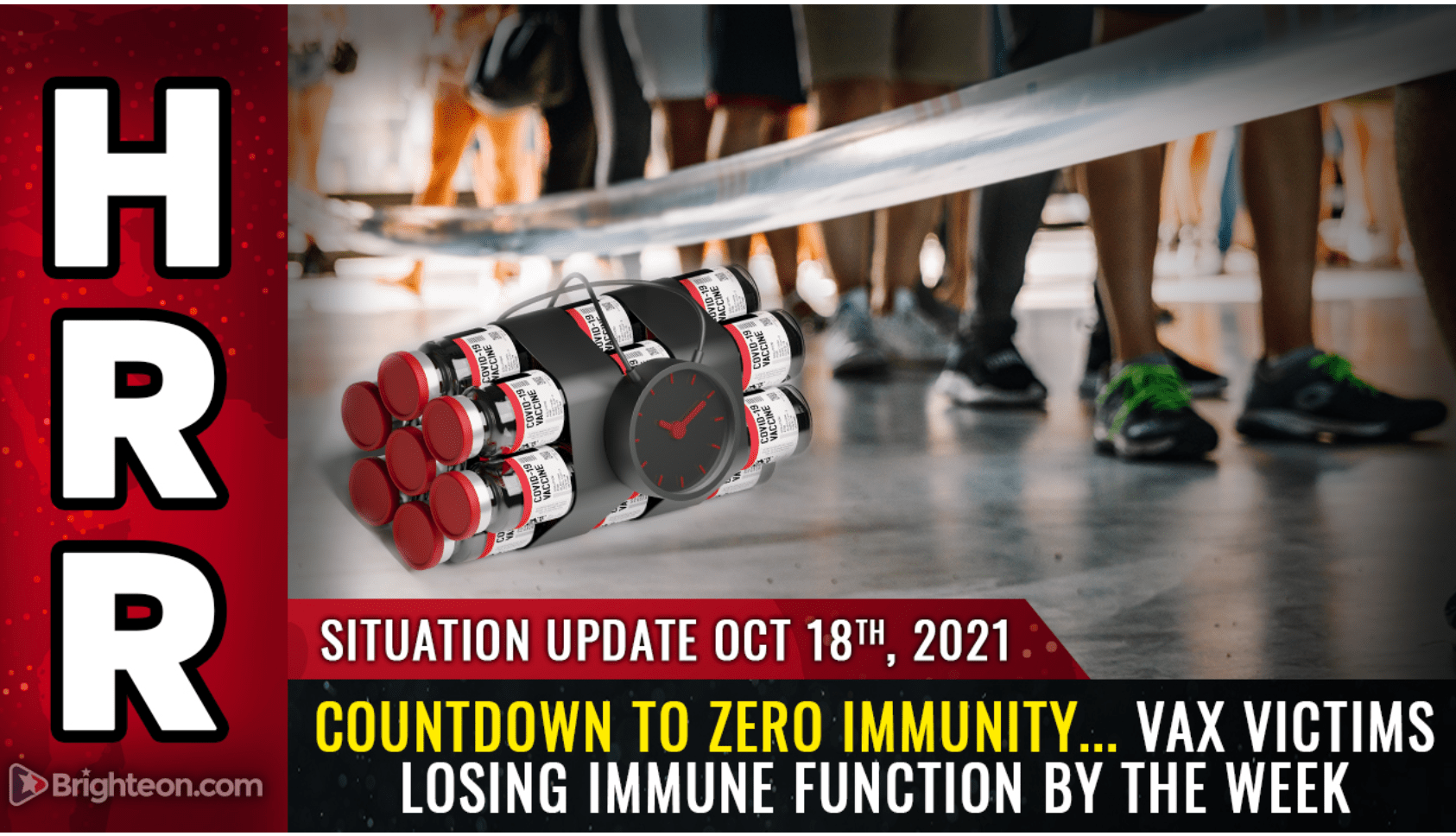 Countdown to ZERO IMMUNITY… vaccine victims are seeing their immune response drop by about 5% each week, with long-term consequences mirroring AIDS

According to the trend described by the current data, as The Expose adds:

Everybody over 30 will have lost 100% of their entire immune capability (for viruses and certain cancers) within 6 months. 30-50 year olds will have lost it by Christmas. These people will then effectively have full blown acquired immunodeficiency syndrome and destroy the NHS.

Booster shots further accelerate the destruction of the immune system, which explains why 90% of hospital admissions in at least one US hospitals were among vaccinated individuals, according to a new whistleblower who has stepped forward via The Highwire. With credit to TheHighWire.com, we have posted that whistleblower video here:

If the trend holds, the next six months will see a global wave of vaccine victims dying from cancer and common infections

The plunging immune response among vaccine victims means that fatalities from cancer — and from common infections such as winter colds and flu — are set to skyrocket over the next six months. It is a fully-functioning immune system, after all, that keeps cancer in check and prevents common wild-type pathogens from wreaking havoc across the body.

Immune function is supported and enhanced by vitamin D, zinc and other critical nutrients, which is exactly why the pro-genocide media and so-called “science” journals attack nutrition (as well as ivermectin). A nutrient deficiency impairs immune function, which is why vitamin D deficient people tend to get sick far more frequently than others. And now, with vaccines literally destroying immune function by the week, we have the deliberate takedown of human immune function combined with nutritional deficiencies and artificial restrictions on medical interventions that might save lives.

The only plausible explanation for all this is that the vaccines are, indeed, a depopulation weapon delivery system, and they function by destroying a victim’s immune system, causing them to be killed by cancer or common infections. Just today, fully vaccinated Colin Powell died from covid, marking yet another post-vaccine victim of the depopulation agenda.

As AIDS patients know very well, those individuals suffering from heavily suppressed immune function can be killed by low-level winter colds or flu pathogens that would normally pose no risk at all to a healthy person. Little did we know an AIDS-like weapon system would be loaded into needles and dishonestly called “vaccines” to fool the weak-minded and gullible.

The evil genius in this depopulation plan is that vaccine-induced immune destruction deaths will never be attributed to the vaccine itself. Those who die from cancer after vaccines destroyed their immune system will be recorded as “cancer” deaths, not vaccine deaths. And those who die from common folds or influenza strains will be described as having been infected with “super flu” strains that will, of course, be blamed on the unvaccinated.

Even if millions of Americans die over the next six months and hospitals are completely overrun, covid vaccines will never be tied to any vaccines whatsoever. The pharma-funded media will make sure of that.

Making matters even worse, nurses and hospital workers with natural immunity are right now being fired from their jobs for refusing to take spike protein injections. This is causing severe staffing shortages in some areas (such as New York), and we aren’t even into the flu season yet. Once vitamin D levels plunge during the darker, cold weather months of December, January and February, we are very likely to see hospitals in a staffing panic at exactly the same time the wave of immune-compromised vaccine victims kicks in.

Watch for the lying corporate media to run with the hospital crisis stories, claiming, “people are dying because selfish anti-vaxxers won’t take their vaccines!” But in reality, it will be the vaccinated who will be dying from their own suicide shots, since allowing yourself to be injected with a deadly biological weapon spike protein nanoparticle isn’t exactly a wise strategy for lasting health.

The upshot is that the covid plandemic really is a global depopulation scheme, and the hysteria about covid was designed to drive people into accepting the very vaccines that are destroying their immune function and plunging them into near-certain death. The next six months will reveal mass death across the Northern hemisphere, even as the war criminals pushing these deadly vaccines double down on their genocidal demands.

The reason why they want 100% of the public to be vaccinated is so that there is no control group to compare against the vaccinated. As long as a control group of unvaxxed people exists, the mortality associated with vaccine injections cannot be swept under the rug. In fact, as Alex Berenson is now reporting, there are excess post-vaccine deaths in Scotland as well as across Germany.

In today’s especially informative podcast, I cover China’s hypersonic missile test claims, why the US Navy now wants to charge soldiers for their training costs, Australia’s insane anti-biker laws that criminalize tattoos, and supply chain shortages that are seeing public schools beg parents to keep their kids at home because the schools have no more food.

Oh, the joy of living under socialism! America is, indeed, rapidly becoming Venezuela…