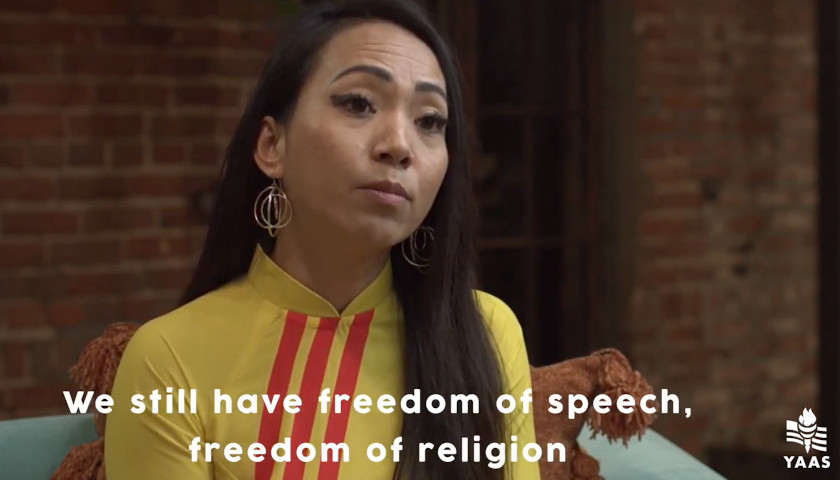 Amy Phan West escaped Vietnam’s communist dictatorship in 1984. Now she’s urging Americans to never take their freedoms for granted, lest they fall prey to the same fate as Vietnam.

Too few have learned about the horrors of communism. Fewer still have escaped it and lived to tell the tale.

Amy Phan West is one such survivor. In 1984, Phan escaped Vietnam’s communist dictatorship by concealing herself in the bottom of one of her father’s fishing vessels before it set out to sea.

Escape wasn’t a question of political preference for Phan and her family. It was one of survival.

In a recent interview with Young Americans Against Socialism (YAAS), Phan told how her grandfather was shot 16 times while laying on her father’s lap.

“My dad told my mom, ‘We can’t have a future in Vietnam. So we have to leave Vietnam because we will die in the hands of the communists,’” says Phan, an entrepreneur who now lives in America.

A refugee who escaped from a communist country.

Now she’s a small business owner in the United States of America.

She has a strong message to the young Americans trying to bring socialism and communism to the USA: pic.twitter.com/Z3z5YxtgcW

Before the communist takeover, Phan’s mother and father made a living by fishing. They made enough to feed themselves and put a roof over the heads of their small family, which also included Phan’s twin brother and her younger sister. Phan said life was “beautiful and nice” in Vietnam for a time. Things changed quickly, however, under the communist regime.

“Once the communists took over, everything that [my parents] fished they had to give to the communists, the government,” said Phan. “And if they don’t do it, they make an example of them. Bury them alive.”

Phan’s father realized his family could not survive in Vietnam. So one day he hid them all underneath his fishing boat and set out to sea, taking with them all the food, water, and clothes they possessed. After three days at sea, the family ran out of fresh water. They were saved when they encountered a German oil tanker. The crew took them in, gave them food and water, and eventually carried them to a refugee camp in Thailand.

The conditions at the refugee camp were poor, but eventually Phan and her family were granted asylum in America. But the horrors of communism continue to haunt her.

Phan says she has no wish to relive that experience, and her message to young Americans is simple: cherish and protect the Constitution.

Pointing to freedom in retreat in nations around the world such as North Korea, Venezuela, and China, Phan says Americans must not take these freedoms for granted.

“This country is great because of our Constitution,” Phan says. “So we have to fight and we have to [preserve] that. If we don’t, we will lose it all.”

As moving and powerful as Phan’s story is, many FEE readers will recognize that the horrors of which she speaks are, tragically, not unique.

As Ilya Somin of George Mason University pointed out in a 2017 Washington Post article, communist states killed as many as 100 million people collectively during the 20th century, more than all other totalitarian regimes combined during that period (hyperlinks added):

In China alone, Mao Zedong’s Great Leap Forward led to a man-made famine in which as many as 45 million people perished – the single biggest episode of mass murder in all of world history. In the Soviet Union, Joseph Stalin’s collectivization – which served as a model for similar efforts in China and elsewhere – took some 6 to 10 million lives.

Mass famines occurred in many other communist regimes, ranging from North Korea to Ethiopia. In each of these cases, communist rulers were well aware that their policies were causing mass death, and in each, they persisted nonetheless, often because they considered the extermination of “Kulak” peasants a feature rather than a bug.

While collectivization was the single biggest killer, communist regimes also engaged in other forms of mass murder on an epic scale. Millions died in slave labor camps, such as the USSR’s Gulag system and its equivalents elsewhere. Many others were killed in more conventional mass executions, such as those of Stalin’s Great Purge, and the “Killing Fields” of Cambodia. The injustices of communism were not limited to mass murder alone. Even those fortunate enough to survive still were subjected to severe repression, including violations of freedom of speech, freedom of religion, loss of property rights, and the criminalization of ordinary economic activity. No previous tyranny sought such complete control over nearly every aspect of people’s lives.

Read the last sentence again: No previous tyranny sought such complete control over nearly every aspect of people’s lives.

Somin gets at the heart of Marxism here. While many see socialism as a philosophy of compassion, the ideology is pregnant with the desire to control others. To be sure, many seek to use this control for noble ends. Eliminate poverty. Reduce inequality. But as FEE founder Leonard Read observed in his classic work Let Freedom Reign, “the bloom pre-exists in the seed.”

This was Read’s way of saying we must look at the means we use, not just the ends we seek.

Ends, goals, aims are but the hope for things to come…They are not a part of the reality… from which may safely be taken the standards for right conduct. They are no more to be trusted as bench marks than are day dreams or flights of fancy. Many of the most monstrous deeds in human history have been perpetrated in the name of doing good—in pursuit of some ‘noble’ goal. They illustrate the fallacy that the end justifies the means.

FEE’s archives are filled with articles chronicling the horrors of Marxism, from the Bolshevik Revolution of 1917 to the tragic collapse that continues today in socialist Venezuela. There are accounts of others who, like Phan, escaped communism only to find the seeds of its rebirth here in America. Some of them are doing their part to help Americans understand socialism and freedom.

It’s a cliché, but sometimes clichés are true: freedom is not free.

If Americans forget this crucial truth, we may one day learn the bitter truth of socialism that Phan and so many others were forced to endure. Phan, at least, appears determined to never that happen.

“If you hear my voice today, this is it,” she said. “Never, never surrender your Second Amendment. Because once you do, they’ll bury you alive.”

Putin: By abandoning Russian oil, Europe will lose competition to other regions of the world!