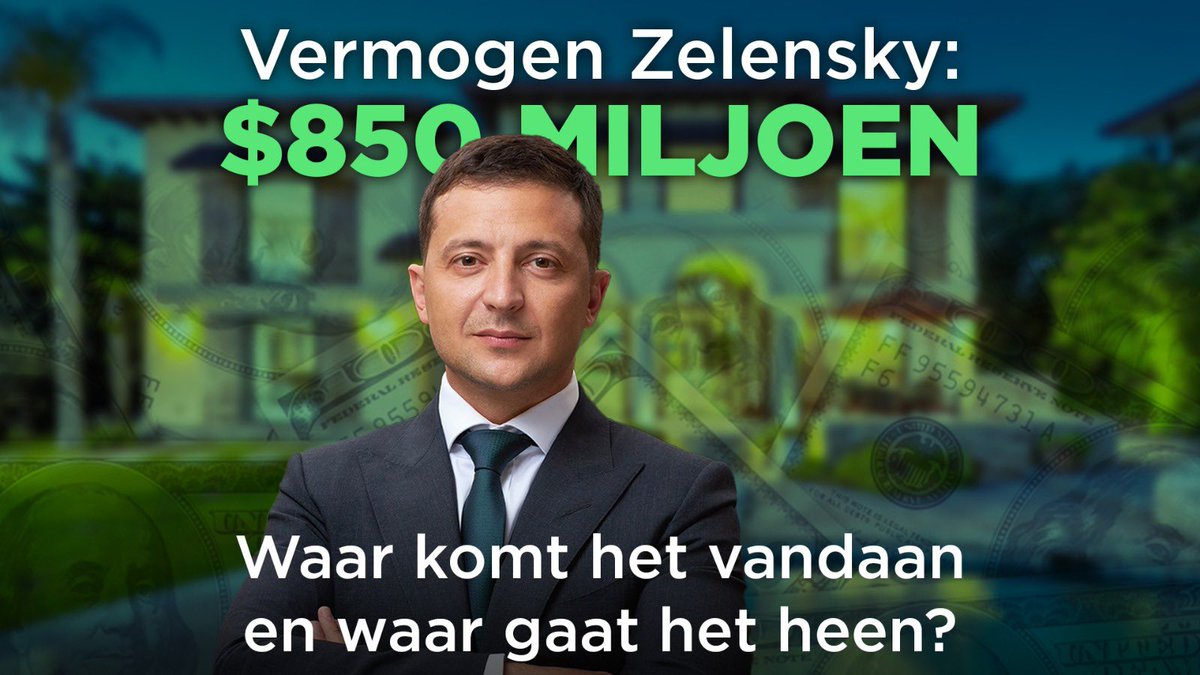 Last year, a Pandora Papers leak revealed that Mr Zelensky, who campaigned on promises to “break the system” of oligarchic control and corruption in Ukraine (ER: to our knowledge, the very opposite has happened), set up a spider web of offshore companies in 2012. Zelensky’s office justified the move by saying they were a form of “protection” against former President Viktor Yanukovych.

“Zelensky has a fortune: various estimates put his wealth at around $850 million. He amassed most of it after taking office as president. Where does the money come from? And more importantly, where is it going?” the Forum for Democracy asked in posts on its Twitter and Telegram accounts on Monday.

Translation: Zelensky has a fortune: various estimates put it at around 850 million. He received most of it only after he became president. So where does the money come from? And more importantly: where is it going? #FVD

The Dutch national conservative and hardline Eurosceptic party boycotted Zelensky’s speech to the Dutch parliament last month, denouncing it as a violation of nearly two centuries of democratic tradition, which forbid foreign heads of state from speaking before the House of Representatives.

The party also expressed concerns about Zelensky’s ban on political parties, including the main opposition party, and the shuttering of TV channels critical of his regime.

The Forum for Democracy did not specify where it got its $850 million estimate.

Ilya Kiva, a Ukrainian opposition lawmaker who was stripped of his mandate last month, alleges that “hundreds of millions of dollars” are being wired to accounts controlled by the president’s office, where they are being plundered, not just by Zelensky and his staff, but by “Western politicians who get kickbacks for their [countries’] assistance”. Kiva has suggested that Zelensky’s earnings have recently jumped to about “$100 million a month”.

Before becoming president in 2019, Zelensky co-owned the Kvartal 95 television entertainment company, which he co-founded in 2003. Last week, Volodymyr Landa, deputy editor-in-chief of Forbes Ukraine, said that the company earns about $20-$30 million per year, with Zelensky owning a 25 percent stake.

Before the 2019 election, Zelensky’s family also earned a 25 percent stake in the Maltex Multicapital Corp, a tax shelter in the British Virgin Islands, through a separate Belize-registered shell company, Film Heritage, according to the Organized Crime and Corruption Reporting Project. Zelensky insisted after the election that he had dropped his share in the company, and has not mentioned the company in any of his tax declarations since 2018.

However, in October 2021, the OCCRP reported that the president, his family, and members of his inner circle have held on to Maltex, and operate an entire network of shady offshore companies, at least two of them used to buy property in London near the famous 221B Baker Street and the Houses of Parliament.

Ihor Kolomoisky, a Ukrainian oligarch who heavily sponsored Zelensky’s campaign in 2019, has himself been accused of stealing $5.5 billion from PrivatBank, Ukraine’s largest commercial lender, and funnelling it offshore.

Pressed by media over the offshore-related revelations late last year, Mykhailo Podoliak, an adviser to Zelensky’s chief of staff, assured that the president had been forced to create the offshores to “protect” income from the “aggressive actions” of the “corrupt” government of President Viktor Yanukovych. “Journalists have de facto confirmed the president’s absolute respect for the standards of anti-corruption legislation”, Podoliak said.

Yanukovych was ousted in a Western-backed coup in 2014, giving rise to the Ukraine crisis which continues to this day.