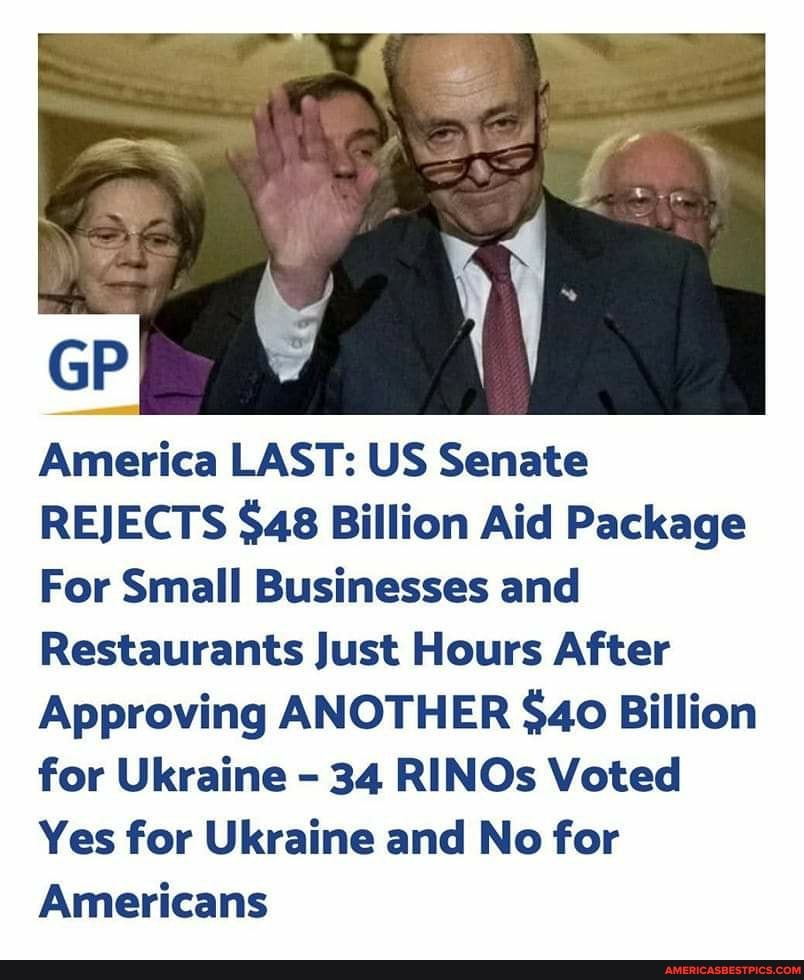 On Thursday – just hours after approving another $40 billion in US taxpayer dollars for Ukraine – the US Senate blocked a bipartisan $48 billion aid package for restaurants, gyms, and other small businesses that have been struggling in Biden’s post-lockdown economy.

Presumably, they can’t launder that money as easily as shuffling it off to Ukraine, so American business owners get the shaft yet again from its traitorous elected officials.

In other words, just another day in the DC Swamp…

On same day that the Senate cleared $40 billion more for Ukraine, they rejected a similar bill for American small businesses.

We should be opposed to all big govt bills, but GOP members who voted for Ukraine over American relief have some qs to answer.https://t.co/vPAY4Z1ZIu

Needing 60 votes to move forward, the Senators killed the package with a 52-43 vote. Five Senators refrained from casting a vote at all, and just five GOP senators voted for the motion to proceed.

Odd… considering there were a whopping 39 of these so-called ‘Republicans’ who voted for the $40 billion Ukraine aid package.

Here are the RINO scumbags who rejected the aid package for Americans, yet sided with Democrats on the additional $40 billion for Ukraine. The list includes the usual crowd of swamp creatures like Mitt Romney, Lindsey Graham, and Mitch McConnell, but it also reveals some more favorably viewed ‘conservative’ Senators had no problems finding the money when it was for the neocon war machine in Ukraine.

Looking at you, Ted Cruz:

At least the same Senators who voted not to send Ukraine aid remained consistent. All 11 of them rejected both packages:

The most open liberal-Republicans of the bunch voted yes on both bills (totaling a whopping $88 billion).

Granted, with the current economic disaster, debt through the roof, and inflation on a meteoric rise thanks to the Biden Administration’s Marxist policy agenda, printing an additional $48 billion for anything is a questionable decision – which is what opponents of the bill argued when casting their votes.

Senator Rand Paul (R-KY), who – just as he did on the Ukraine bill – voted no on the second proposal, pointed out the obvious in a speech on the Senate floor before the vote. You cant fix these problems by just printing more money.

“Democrats need to wake up and realize that dumping more money in the economy is simply pouring $5-a-gallon gas on an already out-of-control fire.”

The fact that the Uniparty decided to send another $40 billion to Ukraine – and on the same day they turned down the money for Americans, no less – is downright criminal.

The way it looks right now is that the Democrats secured the win for Ukraine and their (il)liberal ‘democracy’ agenda – which was supported by sellout Republicans, while simultaneously fighting for relief at home as the Republicans kill the stateside relief bill; therefore, scoring a huge political win where Republican elected officials take the heat off of the Democrat’s catastrophic failures.

This is ‘court jester conservatism’ at its finest – the only role these RINOs play is to legitimize the Left and undermine the America First agenda.

What a joke. Meanwhile, American citizens are the ones paying the price – quite literally, and, as of now, any relief for Americans that could potentially arrive is back to square one.

“The vote likely spells doom for the bill, which was crafted by Sens. Roger Wicker (R-Miss.) and Ben Cardin (D-Md.) and backed by Senate Majority Leader Charles Schumer (D-N.Y.) as a way to help struggling small businesses get out of debt accrued during the pandemic.

“Well, this was our best shot. Make no mistake about it, we’re disappointed that we weren’t able to get it done,” Cardin told reporters after the vote. “But you know, I’ll always fight for small businesses. I’ll continue to look for ways we can help.”

These traitors have shown their true colors one too many times.

As the Post Millennial’s Ian Miles Cheong asks, are you paying attention yet?

Are you paying attention yet? pic.twitter.com/bLVLuF6ZrO