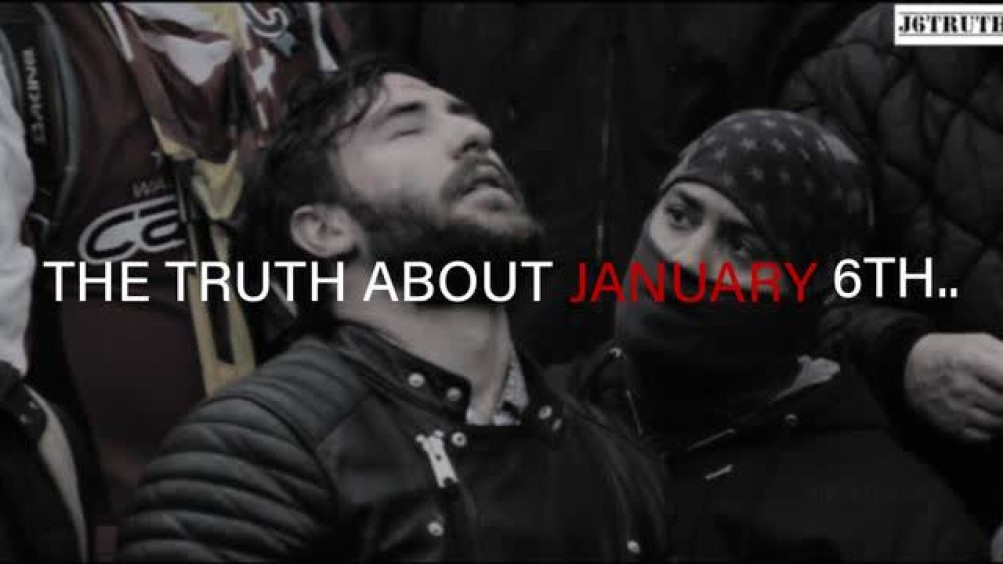 Narrated by 27-year-old Jake Lang from his prison cell in solitary confinement at the DC Central Detention Facility, ‘The Truth About January 6th’ gathers never-before-seen cellphone footage taken at the scene of the Capitol Riot, refuting the Establishment narrative of the events of that day.

Last September, Revolver.News investigative journalist, Darren Beattie reported on the 1/6 Commission and how it was “The highest-stakes, most dangerous and most important story in the country.”

Beattie said that the evidence was overwhelming that 1/6 was actually orchestrated by the US Government saying, “I believe [it] was engineered as an infiltration operation. This false narrative is now the key pretext that our National Security state is using to ram through Patriot Act 2.0, the Domestic War on Terror.”

Beattie was proven right about this Domestic War on Terror, with recent revelations about the FBI profiling parents attending school board meetings and documents leaked from a DHS whistleblower showing that the agency’s Disinformation Governance Board was part of an effort by the Federal Government to work with private social-media platforms to police the content of Americans.

This is contrary to the lies of Secretary Alejandro Mayorkas, when he perjured himself before the Senate Homeland Security Committee last May.

Beattie pointed to over 20 unindicted co-conspirators in the 1/6 indictments who had not been charged for the same activities — in some cases, more severe activities — as those named alongside them in the indictments. Beattie believes these individuals, such as Ray Epps were not indicted, due to grants of immunity because they are either federal agents or assets.

Epps is seen in the 1/6 videos, ordering people to storm the Capitol and to break into the Capitol building. He was never indicted, while his own statements and actions were used by the Government to incriminate and to deny bail to underlings in the Oathkeepers. Why did the Commission ignore Ray Epps?

Last January, The Epoch Times reported that Ashli Babbitt pleaded with police to call for backup and tried to prevent the attack, not join it, moments before she was shot and killed in cold blood by Capitol Police Lt. Mike Byrd, based on the analysis of a new video that had emerged from that day:

“Frame-by-frame video evidence analyzed by The Epoch Times paints a vastly different picture of Babbitt’s actions than that portrayed in media accounts over the past year. News media regularly painted Babbitt as ‘violent,’ a ‘rioter,’ or an ‘insurrectionist’ who was angrily trying to breach the Speaker’s Lobby.”

Investigative reporter, Tayler Hansen told The Epoch Times that he’d just recently retrieved an Instagram live-stream video he shot the year before, on January 6th, 2021. It shows Babbitt walking inside the Capitol, as she first turned the corner into the Speaker’s Lobby hallway.

He said it confirms what he told The Epoch Times on January 17th, that Babbitt was friendly with the police officers when she first approached the doors.

Babbitt served as a police officer in the US Air Force during her 14 years of military service. Her husband, Aaron believes her law enforcement experience told her something was wrong.

This past Sunday, June 12, 2022, Rep Jim Jordan (R-OH) told Maria Bartiromo at FoxNews that, “This committee has altered evidence and lied to the American people about it, so much so that they had to issue a statement which says, we regret the error, which is government-speak for, we got caught lying,” Jordan continued. “So that’s what this committee is about. I think the country sees it for what it is, a partisan political activity.”

In June 2021, intelligence insider, Fort Detrick alum and US Senate candidate for Maryland, Dr Jonathan McGreevey joined Stew Peters with his jaw-dropping account of what really happened on 1/6, claiming that Nancy Pelosi orchestrated the January 6th false flag, with a lot of help from the FBI.

McGreevey said, “She even called in the orders to ‘get’ someone to sacrifice,” and that you can see the shooter responding to orders from Pelosi’s people in his earpiece.

McGreevey explained that Byrd couldn’t use the normal communications systems because of the law enforcement present and all the journalists listening in on the Capitol Police scanners, so they were using military encrypted communications, which were provided by the Commander of the National Guard in DC, Major General William Walker – the same commander who denied President Trump’s request to bring troops on 1/6.

Walker was promptly rewarded by Pelosi with the plum job of Sergeant at Arms of the US House of Representatives.

Four Capitol Police officers have since “committed suicide” and a fifth died from a stroke. However, the gaslighting fake news frequently lies, to this day that their deaths were caused by Trump supporters.

The January 6th deaths of four Trump supporters have been totally misrepresented, when they haven’t been completely ignored. Phillip Anderson was standing next to Rosanne Boyland while the Capitol Police sadistically beat her to death, as she lay on the ground, unconscious and motionless.

In the film, we see the savage beating she received from several different angles and how the Capitol Police tear-gassed those trying to rescue and drag her to safety.

As Cara Castronuovo says, “Fifteen people currently sit in solitary confinement since January 6th who witnessed what happened to Roseanne Boyland, who all say they were trying to help her and others and save their lives, that were underneath the pile of protestors that were on top of Roseanne Boyland but were getting tear-gassed and hit by police – anybody that tried to save these peoples’ lives.”

Protestors dragged Boyland away and attempted CPR, while the cops (whose job it was to do so) watched.

The footage shows protestors trying to de-escalate the situation afterwards but one police officer continued to lob concussion grenades at the packed-in protesters.

We now learn that one of these grenades struck Benjamin Phillips, which stopped his heart and killed him. Kevin Greeson was also killed by a “non-lethal” stun grenade from the barrage thrown into the crowd by Capitol Police.

These two men were at the far perimeter of the crowd and not near the scrum of the conflict. The Fake News never talks about how these to men died. As Castronuovo says, “If you Google their names…it’ll just say that they died of a heart attack at a Trump rally.”

We also see footage of a Capitol Police Officer relentlessly beating Victoria White with a collapsible ASP. She was beaten half to death but survived.

Attorney Joseph McBride says, “That device, as per DC Police protocol is supposed to…be used to break windows in emergencies and it’s supposed to be used below the shoulders or for self-defense,” neither of which apply in this footage.

“A conflict happened that day, and as a result, we have this massive dragnet for everybody who had the courage to go to DC to object to the election results, is now a target of the Department of Justice.”

Due to the “Defund the Police” movement, more than 90% of criminals in DC are released without bail, yet hundreds of those arrested at the Capitol Riot have been denied bail and were still languishing in solitary confinement after 17 months, at the time this film was released.

The BLM-Antifa riots of 2020 caused $2 billion in damages and killed over 20 people, while the gaslighting propaganda media gloated approvingly and called them “Peaceful Protests”.

From his prison cell, Jake Lang asks, “What is the hidden agenda behind the difference of treatment, from the January 6th political prisoners to the Black Lives Matter/Antifa rioters?

“Why have I been held for 17 months with no bail while the kid gloves have been handed off to Black Lives Matter and Antifa protesters for firebombing buildings and assaulting police officers?…There’s an obvious bias against conservatives in America.”

A year ago, Jonathan McGreevey told Stew Peters that the Democrats didn’t expect they would pull off the 2020 election fraud, saying, “They thought the fraud would be uncovered quickly. They thought that President Trump would not leave…

“They couldn’t believe that he was leaving. They were absolutely stunned the Patriots didn’t take to the streets and shut down the country.”

The January 6th Commission was chartered and it has continued to act as if Trump supporters had, in fact mounted a massive insurgency to overthrow the Government, which is not, at all what happened.