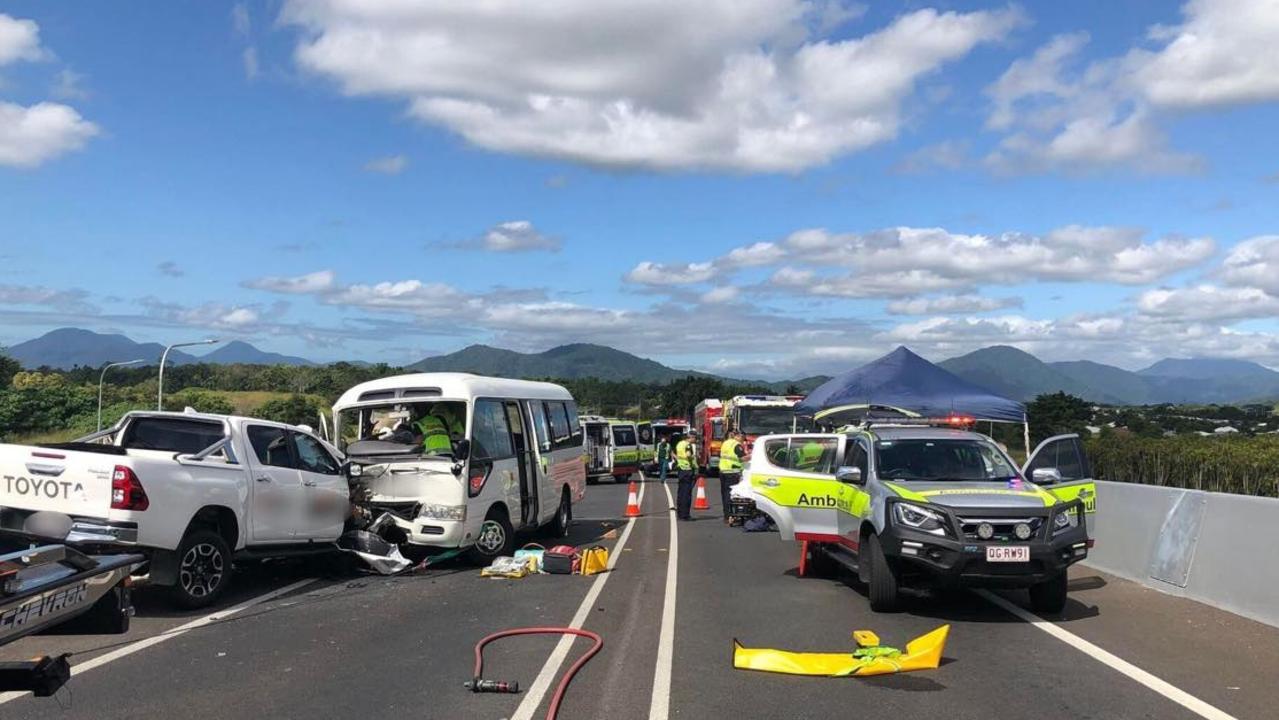 A serious accident in Cairns recently hospitalised four occupants of the minibus and seriously injured the car driver when, allegedly the minibus suddenly swerved across traffic lanes hitting the Toyota Hilux. All bus drivers in Queensland were required to be Covid vaxxed.

In 2021, the government of Australia colluded with three vaccine manufacturers to oppress the Australian people with various levels of discrimination, coercion, propaganda, unlawful detainment, segregation, digital compliance systems and broader threats to individuals’ livelihoods. These totalitarian actions were not rooted in any data or science and provided no public health benefit. These actions were designed to break people down psychologically, to subdue their body autonomy and personal beliefs and force experiments into their bodies.

Today, healthy young people are dying suddenly and unexpectedly across Australia. Even though journalists are reporting on the matter now, the corporate media still won’t dare mention the causes behind this scourge.

Moreover ABC News and commercial news broadcasts are reporting every day deaths of motorists often in single vehicle accidents where cars are running off the road, hitting trees and killing the driver.

The bankrupt Queensland Labor Party Corporation from July 1 doubled or in some cases tripled the amount of traffic fines for alleged driving infringements.

The Transport Minister, Mark Bailey a former Brisbane academic who can’t drive a car, says he is perplexed about the upward, spiralling traffic accident rate, coinciding with the advent of mRNA Covid jabs.

Mr Bailey said nine lives were sadly lost in three days (Friday, 6 May – Sunday, 8 May) taking the tally to more than 100 deaths so far in 2022, many more than last year.

“I cannot stress the importance of doing the right thing when you are behind the wheel because the consequences can be deadly,” he said.

“Instead of celebrating Mother’s Day this weekend, nine families were missing loved ones from around the dinner table.

“My thoughts go out to every person impacted by these tragedies.

“We’re only nine days into May and already 13 people have lost their lives.

“We’ve also seen a number of serious injuries from crashes over the weekend and the impact of those shouldn’t be underestimated – the effects can be traumatic and life-long.

Fully-vaccinated individuals who maintain a fit and healthy lifestyle are dying unexpectedly. According to the Royal Australian College of General Practitioners, this new death category is dubbed “Sudden Adult Death Syndrome (SADS).” People under the age of 40 are now being urged to get their hearts checked, as a wave of young people collapse after being coerced to take part in blood-clotting vaccine experiments.

Melbourne’s Baker Heart and Diabetes Institute has developed a new national register to better record the surge in death among young, healthy populations. This registry is the first in the world to include hospital, ambulance and forensics information. A spokesperson for the Institute said “there are approximately 750 cases per year of people aged under 50 in Victoria suddenly having their heart stop.” The Institute reports that approximately nine young people are now dying without cause every month, even after a full autopsy. Of course, this autopsy does not include any investigation into the heart-damaging vaccines that these young people are needlessly getting.

In the US, a SADS organization was set up to bring awareness of Sudden Arrhythmia Death Syndrome in young people. This foundation estimates that 4,000 children now die from SADS annually. The foundation reports that over half of the cases include a family history of a SADS diagnosis; however, the foundation does not mention what similar actions those family members engaged in, nor do they investigate the lifestyle factors and vaccine use that those family members have in common in relation to the SADS diagnosis.

Genetic screening is used to determine one’s risk of SADS, yet genetic screening is just a formality. It does not accurately predict a SADS case, investigate its causes or prevent it from happening. Cardiologist Dr. Elizabeth Paratz said it’s very hard to combat SADS because it’s really a “diagnosis of nothing.” It’s a “very hard entity to grasp” for family and friends of victims, she said.

It’s “not as easy as everyone in Australia getting genetically screened,” she said, because scientists are not 100 percent sure “what genes cause this.” Maybe the scientific community is looking in the wrong place, as they protect their overlords, their sponsors and their government enforcers — the vaccine industry.

As more people get screened for SADS, the real problems are ignored and patients are given a false sense of security. The real pressures on the heart include covid-19 vaccines and all the oppressive measures that were put in place to force compliance. The persistent genetic interference of the human body with toxic spike proteins is causing heart inflammation, blood clots and emergency heart problems. The persistent oxygen deprivation and cardiovascular strain from masks also plays a role. Living in fear and in an oppressive state, where government and pharmaceutical companies dictate associations and human rights, has also negatively impacted cardiovascular health. These issues can no longer be ignored.

The generation that grew up with a runaway, unaccountable childhood vaccine schedule and an ever-increasing rate of sudden infant death syndrome (SIDS) and autism is suddenly becoming the generation that must face a runaway covid-19 vaccine program and all of the sudden adult death and heart damage it has wrought.