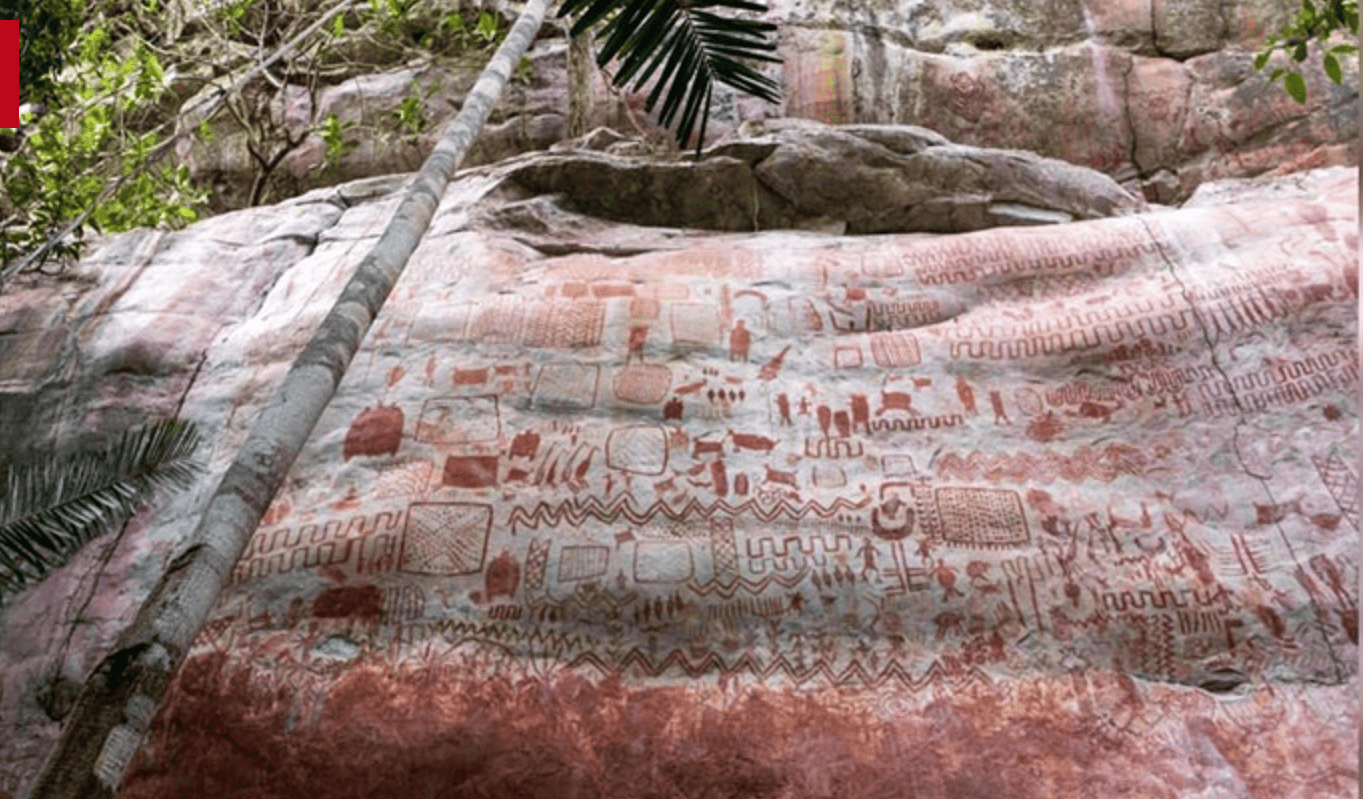 Researchers have discovered an 8-mile-long rock canvas covered in paintings of now-extinct ice age beasts. They estimate that these paintings of animals are around 12,600 years old. (1)

Deep in the Amazon Rainforest lies an artistic masterpiece drawn with the red pigment ochre. The painting, located in Serranía La Lindosa on the northern edge of the Colombian Amazon, is almost like a canvas or an ancient form of graffiti art. It spans 8-miles and depicts all kinds of animals, many that went extinct during the last ice age. (1)

Some of these ice age beasts include (1):

The painting also shows handprints, geometric designs, hunting and fishing scenes, and people interacting with plants, trees, and animals. According to the researchers, the paintings were produced most likely over hundreds and maybe even thousands of years. (1)

“These really are incredible images, produced by the earliest people to live in western Amazonia. They moved into the region at a time of extreme climate change, which was leading to changes in vegetation and the make-up of the forest. The Amazon was still transforming into the tropical forest we recognise today,” said Dr. Mark Robinson, one of the researchers on this project. (1)

Exciting News For Scientists and Historians

Experts believe that these are some of the most realistic drawings of prehistoric animals and scenes of early humans’ daily lives. Excavations to the area revealed the earliest dates that humans occupied this area of the Columbian Amazon. Clues about these early humans’ diets and tools used have provided a window into this time period like never before. (1)

“The paintings give a vivid and exciting glimpse into the lives of these communities. It is unbelievable to us today to think they lived among, and hunted, giant herbivores, some which were the size of a small car.” said Dr. Robinson. (1)

Bone and plant fossils found in the excavated area show these people ate palm and tree fruits, piranha, alligators, snakes, frogs, rodents such as paca and capybara, and armadillo. (1)

Everything that the researchers have discovered so far increases our understanding of the global expansion of humans. Studying these peoples and how they lived allows us to understand how their actions thousands of years prior impacted the Amazon Rainforest, one of the world’s most significant and biologically diverse ecosystems in the world. (2)

“These rock paintings are spectacular evidence of how humans reconstructed the land, and how they hunted, farmed and fished. It is likely art was a powerful part of culture and a way for people to connect socially. The pictures show how people would have lived amongst giant, now extinct, animals, which they hunted.” explained researcher professor José Iriarte. (1)

Peace Made it Possible

The 2016 peace treaty between the FARC and the Colombian Government made the 2017 and 2018 excavations of this site possible. (1)

The ice age beasts discovered on this incredible canvas, as well as the other finds from the project, are to be featured on the Discovery Channel’s Jungle Mystery: Lost Kingdoms of the Amazon. The Discovery Channel is releasing the show in the first week of December 2020. (1)