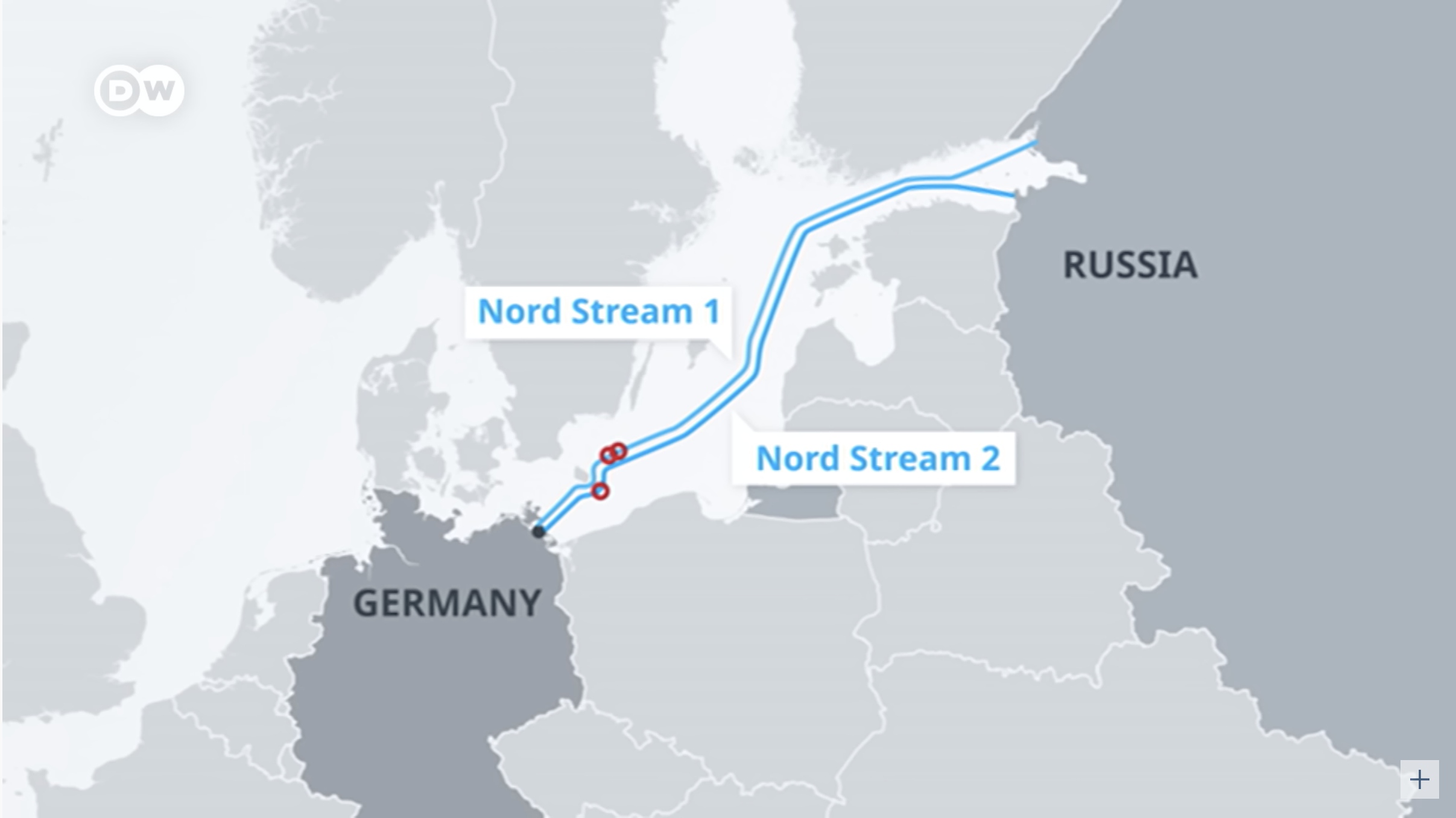 The Danish and Swedish prime ministers said an assessment by authorities indicated that the leaks were not accidental. The EU’s Ursula von der Leyen warned attacks on European energy infrastructure were “unacceptable.”

Danish Prime Minister Mette Frederiksen and her Swedish counterpart Magdalena Andersson both said on Tuesday that leaks in the Nord Stream pipelines were “deliberate.”

Frederiksen told journalists that the “clear assessment” by authorities was that the leaks “were not an accident.”

She added there was “no information yet to indicate who may be behind this action.”

European Commission President Ursula von der Leyen later on Tuesday said it was “paramount to now investigate the incidents” to get full clarity on what happened.

“Any deliberate disruption of active European energy infrastructure is unacceptable and will lead to the strongest possible response,” von der Leyen tweeted. 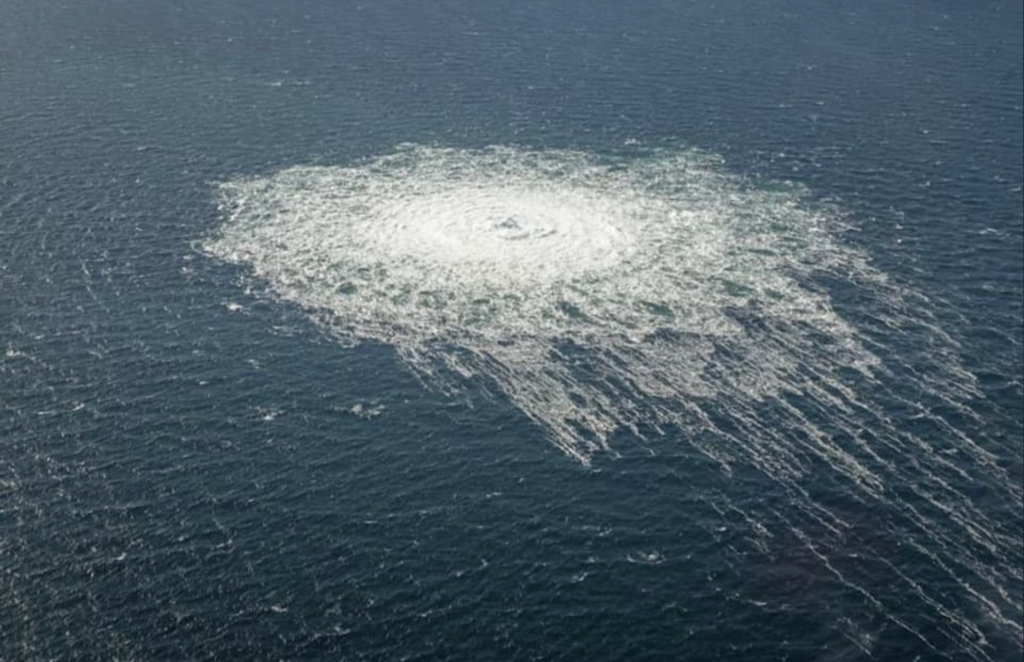 Not a matter of an attack’

On being asked whether she thought the incident was an attack on Denmark, Frederiksen said that the leaks happened in international waters and “the answer is thus no.”

The Danish Energy Agency expects the leaks from the pipelines, both full of gas, to last “at least a week.”

Magdalena Andersson told reporters that intelligence both from Sweden and Denmark pointed in the same direction.

“We have Swedish intelligence, but we have also received information in our contacts with Denmark, and based on this concluded that this is probably a deliberate act. It is probably a matter of sabotage,” Andersson said.

Like Frederiksen, she said it was not a “matter of an attack on Swedish or Danish territory.”

“But that said, the government is taking what happened very seriously, not least in light of the current security situation in close proximity,” she added, referring to the ongoing Russian aggression against Ukraine.

What do we know so far?

Danish and Swedish officials on Tuesday said two leaks had been identified on the Nord Stream 1 Russia-Europe gas pipeline in the Baltic Sea.

The news came only hours after a similar development on its twin pipeline, Nord Stream 2. Both conduits have become flash points in the escalating energy war that has sent gas prices rocketing since Russia invaded Ukraine.

Mikhail Krutikhin, an energy analyst from the RusEnergy consultancy, told DW that initial evidence clearly pointed to sabotage, and said that a key question going forward would be whether the damage originated inside or outside the pipe. He said the shape of the damaged segments of pipe should indicate this.

Krutikhin said it is “very easy to send it in the pipe to a specific point and then have it explode.”

Marine authorities identified a gas leak southeast of the Danish island of Bornholm as the likely cause of the issue affecting Nord Stream 2. Danish officials warned of a threat to shipping in the area and asked vessels to steer clear.

Swedish authorities on Tuesday said there were two leaks on Nord Stream 1 — one in the Danish maritime economic zone and the other in the Swedish one. The two leaks were reported to be very close to one another.

The German economy ministry said it was investigating the incident. “We currently do not know the reason for the drop in pressure,” it said.

Swedish National Seismic Network (SNSN) director Björn Lund told DW that the SNSN had “detected two blasts yesterday. One in the early morning, and then a second one later in the evening.”

He said both were close to the Danish island of Bornholm and that the second, larger one was “very close to the location where the Swedish Maritime Administration tells us that the gas is leaking out of the pipeline.”

Asked if they could have been naturally occurring, Lund said: “No, these are not earthquakes and they are not underwater landslides. So these are definitely blasts.”

Denmark’s armed forces meanwhile released footage showing bubbles on the surface of the Baltic Sea above the Nordstream 1 and 2 pipelines and reported that the largest of the leaks had caused surface disturbance of around 1 kilometer (0.62 miles) in diameter.

Both of the pipelines were built to carry natural gas from Russia to Europe, although the Nord Stream 2 pipeline was never activated.

Ukraine has put the blame firmly at the door of Russia.

“The large-scale ‘gas leak’ from Nord Stream 1 is nothing more than a terrorist attack planned by Russia and an act of aggression towards the EU,” Kyiv’s presidential advisor Mikhaylo Podolyak wrote on Twitter.

He accused Russia of seeking to “destabilize the economic situation in Europe and cause pre-winter panic.”

"Gas leak" from NS-1 is nothing more that a terrorist attack planned by Russia and an act of aggression towards EU. 🇷🇺 wants to destabilize economic situation in Europe and cause pre-winter panic. The best response and security investment — tanks for 🇺🇦. Especially German ones…

Separately, Kremlin spokesman Dmitry Peskov said Russia was “extremely concerned” by the reports of damage and that no option, including sabotage, could be excluded at the moment.

“Obviously, there is a destruction of the pipeline. And what the reason is, there is no option that can be ruled out until the results of the investigation emerge,” Peskov was cited as saying by Interfax state news agency. “This is an absolutely unprecedented situation that needs to be resolved quickly.”

While neither pipeline has been delivering supplies to Europe, both have still been filled with gas. 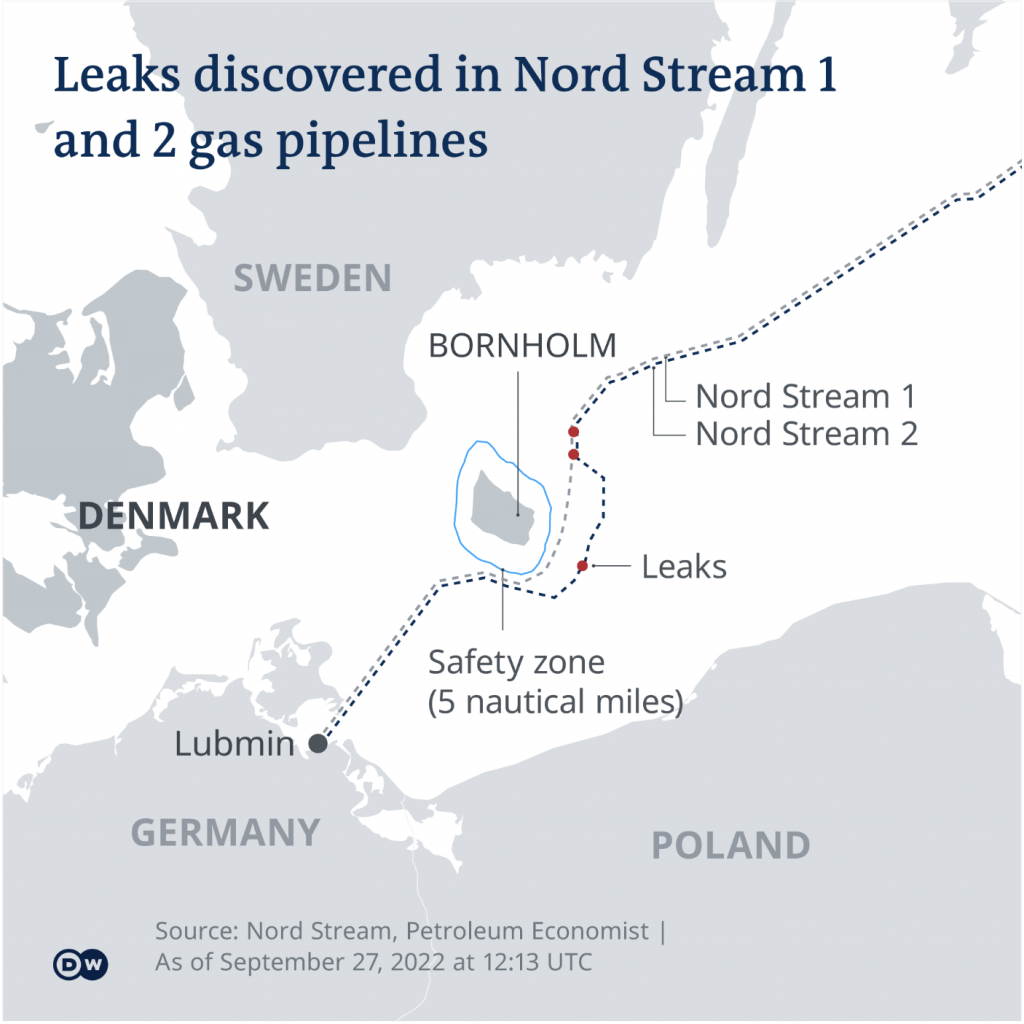 Why is no gas flowing from Russia?

Nord Stream 1 was carrying gas to Germany until earlier this month, but Gazprom then cut off the supply, claiming there was a need for urgent maintenance work to repair key components.

German officials have rejected state-owned Gazprom’s explanation of technical problems, saying the stoppage is merely a power play in response to Western sanctions.

Gazprom began to cut supplies through Nord Stream 1 in mid-June, blaming a delay in the delivery of a turbine that had been sent to Canada for repair.

Germany has long been highly dependent on imports of fossil fuels from Russia to meet its energy needs but has been forced to look for new sources  since the war in Ukraine began.