Prepare For Change
Home Financial Welcome to the CO2 Monitoring Credit Card that Cuts You Off at... 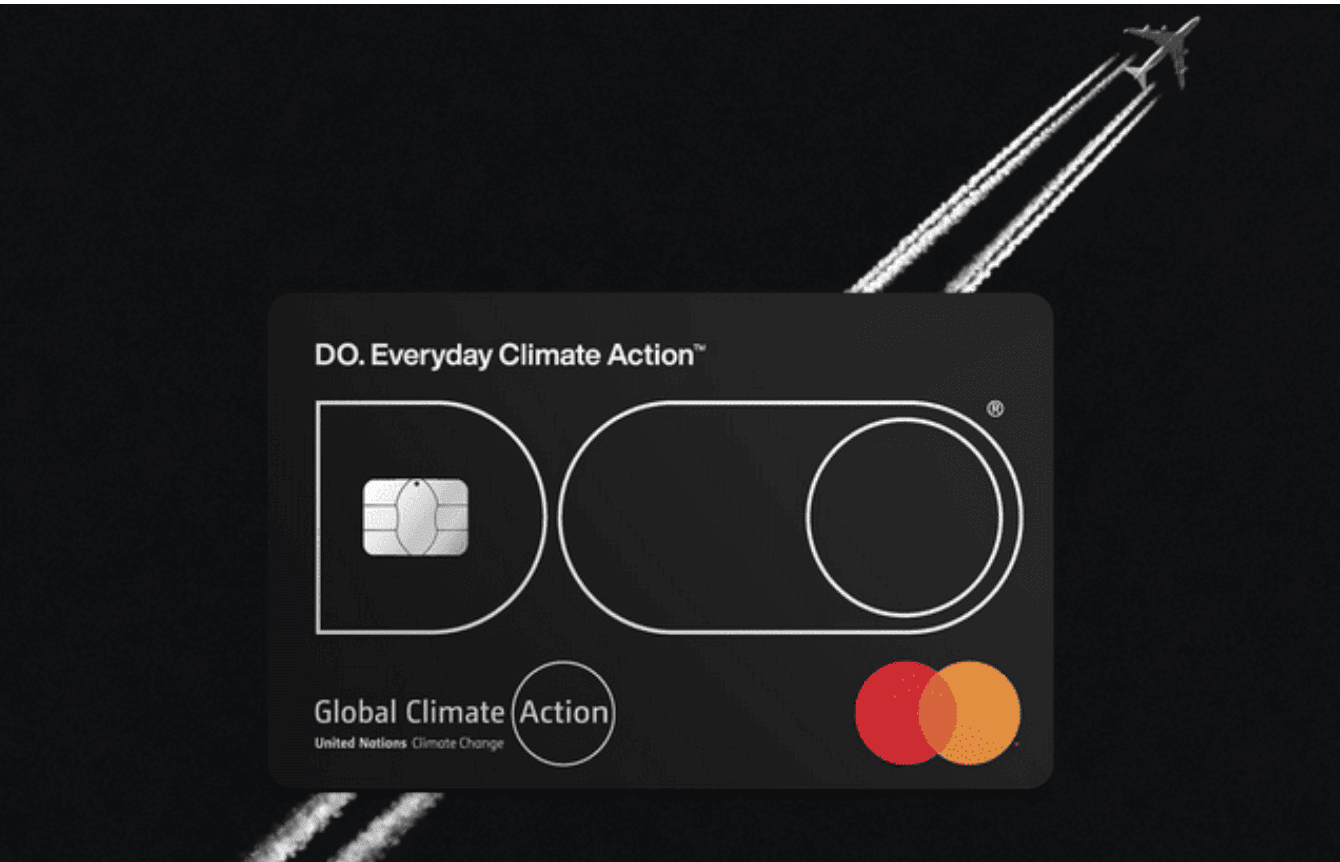 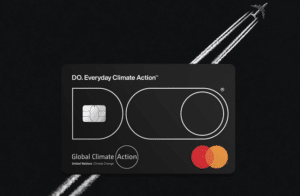 The Swedish company/card Doconomy is a CO2 monitoring credit card that links your every transaction to your supposed carbon footprint. Note the oh-so-appropriate chemtrails in the background of their official card image taken from their website. It’s all about “saving the Earth” while destroying it.

backed by the UN (United Nations), WEF (World Economic Forum) and Mastercard which promises to track your carbon spending – and cut you off once you reach your permitted carbon maximum. Welcome to the impending green dystopia of Agenda 2030. As I mentioned in my previous article New Study Analyzes Implementation of Agenda 2030 Personal Carbon Allowances, the manmade climate change agenda is still being rapidly pushed forward while the NWO (New World Order) controllers see how much mileage they can squeeze out of the COVID Cult craziness. It is a strong possibility they will pivot at some point from the fake COVID emergency to the fake climate emergency and try to convince the population to go along with equally strict rules in some sort of climate lockdown scenario. Regardless of if and when that happens, the objective of both operations is the same: segregation (punishing those who refuse to acquiesce) and control. The long term Agenda 2030 technocratic plan is to introduce a social credit system in all Western nations, then the whole world, based on carbon credits and modeled after the authoritarian sesame credit system in China, which already locks dissenters out of full economic participation. Exactly the same thing, just on a smaller scale, was recently proposed by Victorian Premier Dan Andrews when he advocated a vaccinated economy. 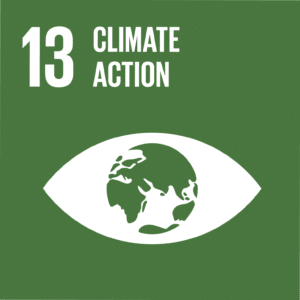 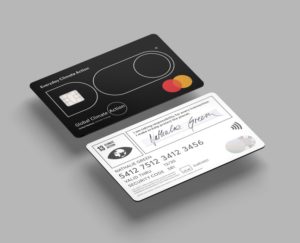 Doconomy (abbreviated DO) is a company registered in Sweden however they have the full backing and support of NWO organizations such as the UN. The card is available in Sweden right now. They are in a partnership with Mastercard, an entrenched company of the Corporatocracy. Here’s what the WEF (the same globalist organization whose head Klaus Schwab promotes the Internet of Bodies) writes in support of their CO2 monitoring credit card in the Doconomy.com website:

“While many of us are aware that we need to reduce our carbon footprint, advice on doing so can seem nebulous and keeping a tab is difficult. DO monitors and cuts off spending, when we hit our carbon max.“

The card features the slogan “DO. Everyday Climate Action” and also has a piece of propaganda on the back side which states “I am taking responsibility for every transaction I make to help protect the planet” which reads like 2nd grade brainwashing. Note the symbolism of the all-seeing eye on the back side of the card in the image above, taking from the UN’s SDGs (Sustainable Development Goals), specifically goal #13, which states: “Take urgent action to combat climate change and its impacts.” 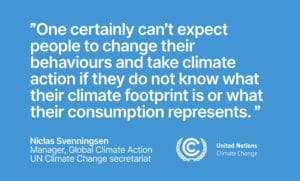 The aim of Doconomy is to entrench the demonization of carbon even further. It’s to trick you into associating every purchase – literally every single one of your economic transactions – with an alleged carbon cost according to the faulty manmade climate change science. By imposing an artificial limit on how many transactions you can make, such a synthetic system would be greatly divorced from the biological reality of the carbon cycle, the necessity of carbon in all forms of life here and the life-giving nature of carbon dioxide. The Doconomy website asks: “With fat, sugar and salt levels labeled on food we buy, why shouldn’t our CO2 emissions be just as visible?” It continues: “This type of information shouldn’t be a premium or luxury that consumers pay for, but rather an essential part of every shopping journey.” They want you to swallow the entire propagandistic idea of a carbon footprint, feel guilty for consuming energy and services, and acquiesce to arbitrary restrictions under the delusion it will somehow help the Earth.

If you think the whole demonization of carbon is insane, it gets worse. Take a look at this. NWO frontman Bill Gates – who only “had dinners” with pedophile and Mossad agent Jeffrey Epstein, even though Gates is on the flight logs of the Lolita Express – has talked in interviews about the carbon sequestration or carbon sucking technology that he is funding. The technology is also referred to as direct air capture. Companies are popping up around the world, such as this one in Canada and this one in Iceland, who are actively taking carbon dioxide out of the atmosphere, then pumping it into stones, the ground or the ocean in order to permanently remove it from the atmosphere.

As with the NWO in general, there are many levels to this. On one level, carbon sucking is being promoted by the oil companies because it’s an easy out; it’s a way they can alleviate their guilt by trying to counterbalance or offset their incredibly dirty and polluted product (crude oil) with claims they are caring for the environment. It’s not quite clear, however, that reducing CO2 has any connection at all with how polluting oil and petroleum products can be. On another level, carbon sucking reinforces the construction of a synthetic economy – a carbon economy – where carbon is the new currency and measurement of economic activity.

On still another level, I think it is wise to be highly skeptical of carbon sucking in terms of how it will affect the atmosphere. Given that plants need and thrive from CO2, and we humans in turn thrive from the greenification of the planet, what kind of world are we creating by deliberately removing this gas of life carbon dioxide from the natural O2-CO2 cycle of respiration and photosynthesis? Experts and studies have shown that plants do best with high carbon ppm (parts per million) concentrations – here is one study of many showing how plants grew optimally at concentrations between 915-1151 ppm, far above the target of 300 ppm set by climate change organizations. Is there an ulterior motive which involves the terraforming of the planet to make it less suitable for human life and more suitable for other lifeforms? This question needs more investigation, but for now, I regard any attempts to remove CO2 from the atmosphere with deep suspicion.

CO2 monitoring credit cards and carbon sucking are both part of the same initiative to invent a new enemy – this time the element carbon, an indispensable element of human life. It diverts attention away from genuine forms of pollution. It creates a new form of measurement and a new artificial economy based on that which is already controlled by the NWO, who can arbitrarily decide what a person’s maxium carbon limit or carbon allowance will be. This is yet more insidious propaganda, which, if enough people fall for it, will become another pretext for the widspread removal of our rights and freedom. Stay alert and aware.