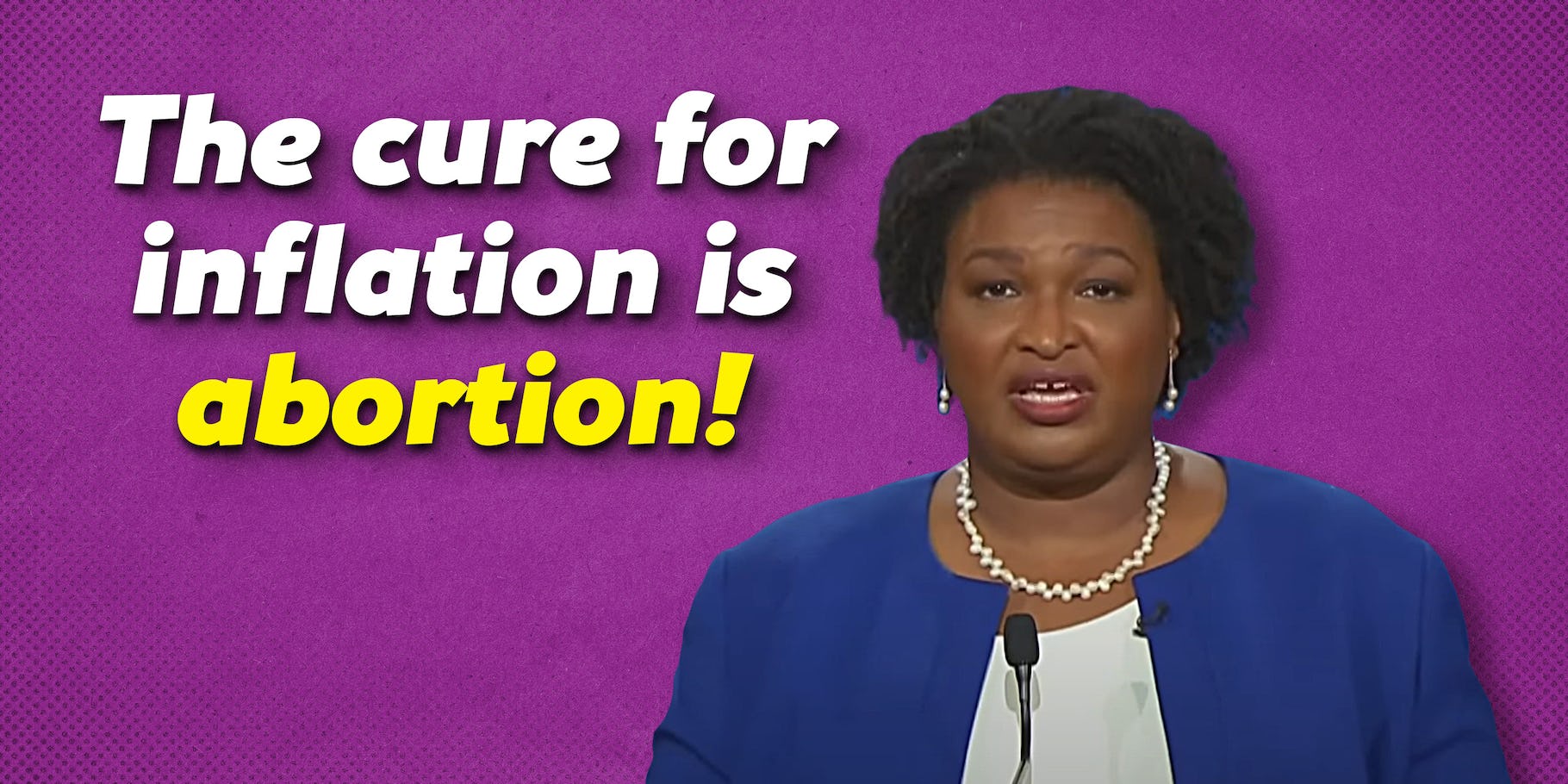 In their desperate search for votes, Democrats have become a ghoulish one-issue party.

On apparent instructions from high-ranking Democrats that everything in the 2022 elections is about abortion, Stacey Abrams said killing the unborn is needed to fight inflation and the recession America is facing under Joe Biden’s policies.

“Having children is why you’re worried about your price for gas,” she claimed

Democrats, in fact, have been trying valiantly to link every election in American this year, every issue, every candidate to abortion. They need that link in order to distract Americans from Biden’s disaster economic and social agendas, which have triggered massive inflation and coercion in many segments of society to enthuse over transgenderism.

Republicans must be vilified if they don’t support abortion, and Democrats who do are needed to keep the country going, the Democrat line poses.

Abrams, the current Democrat nominee for governor in Georgia, was described in a report from the Gateway Pundit as “about to become a two-time loser in her attempt to become Georgia’s governor in 2022.”

Her comments came during her special appearance on an MSNBC program, where she addressed concerns about the recession under Biden. In fact, America has experienced already two consecutive quarters of negative “growth” in the economy, which is the typical definition for a recession.

Is murdering unborn children the prime directive of Democrats?

Some economists already have expressed concern about whether Biden’s actions will push the nation into further trouble – a depression.

Under Biden, inflation has been running wild, at more than 8% in the most recent reports, interest rates are surging, and consumers are having difficulty putting food on their tables. One poll said families with incomes of $100,000 now are living “paycheck-to-paycheck.”

Abrams, who refused to admit she lost the last gubernatorial election in her state, is 48, single, and an activist.

She charged that not killing the unborn is problematic for the economy.

“Having children is why you’re worried about your price for gas. It’s why you’re concerned about how much food costs,” she charged. “For women, this is not a reductive issue. You can’t divorce being forced to carry an unwanted pregnancy from the economic realities of having a child.”

The Gateway Pundit added its own explanation: “Forcing radical ideas that would make killing babies easier in several states is at the top of the Democratic Party’s agenda. In Michigan, Proposal 2 would actually change the state’s constitution and allow women to abort their babies up until the moment of birth. It would also essentially give anyone the right to abort a baby and allow children to abort their babies without the consent of their parent or parents. All three Democrats running for re-election in top positions in Michigan have been pushing the passage of the most radical abortion proposal in the history of the state.”

Further, “Why in the world would anyone actually say out loud that the way to get America out of the Democrat-created economic crisis is by killing more of our children?”