Dr. Deborah Birx – who often appeared in front of COVID-19 task force briefings on behalf of the Trump administration – has admitted to doctoring data associated with the government’s response, as well as quietly altering the Centers for Disease Control advice without authorization, according to her own book.

“I devised a work-around for the governor’s reports I was then writing. Instead of including those recommendations in the common bulleted list, I’d include them in the pandemic summary and state-specific recommendations in the governor’s reports, where they wouldn’t be so obvious. These weekly reports couldn’t go out on Monday without administration approval. Week by week Marc’s office began providing line-by-line edits. After the heavily edited documents were returned to me, I’d reinsert what they had objected to, but place it in those different locations. I’d also reorder and restructure the bullet points so the most salient—the points the administration objected to most—no longer fell at the start of the bullet points. I shared these strategies with the three members of the data team also writing these reports. Our Saturday and Sunday report-writing routine soon became: write, submit, revise, hide, resubmit. Fortunately, this strategic sleight-of-hand worked. That they never seemed to catch this subterfuge left me to conclude that, either they read the finished reports too quickly or they neglected to do the word search that would have revealed the language to which they objected.”

Birx’s appointment was welcomed by her former Chief of Staff in the State Department, Mowers, who tweeted: 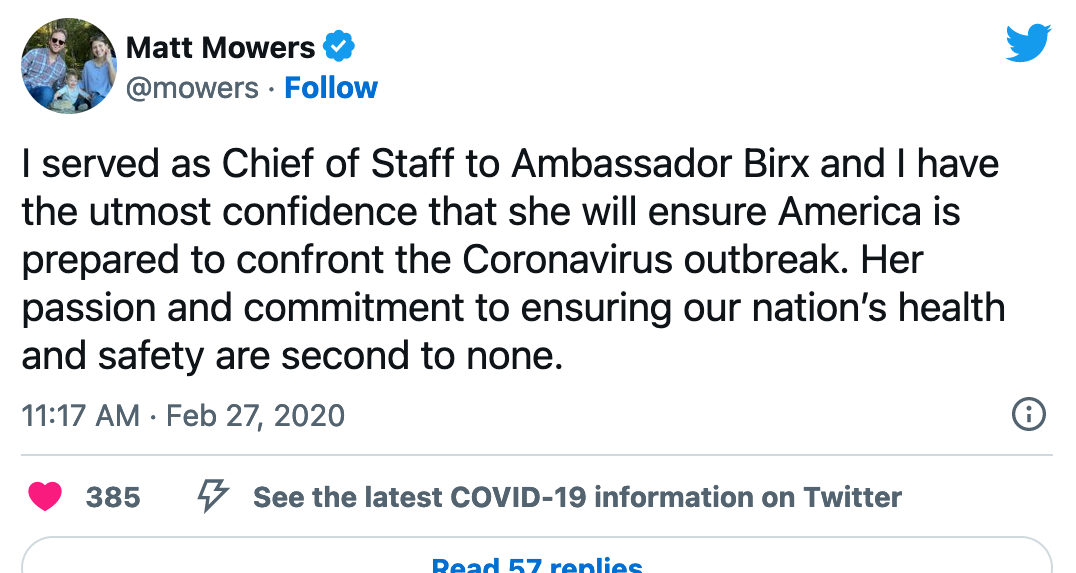 Indeed, press reports indicate that Birx’s ability to operate in such a manner was specifically due to Mowers’s influence:

Though Birx was not personally close to the President, she was able to develop a close relationship with this White House in part because Trump campaign official Matt Mowers served as her chief of staff for nearly two years, according to a source familiar with her situation.

Within weeks, however, Birx was thwarting the will of President Trump and his team, in order to prioritize the demands of pharmaceutical lobbyists and Chinese Communist Party sympathisers like Anthony Fauci. She further revealed:

This wasn’t the only bit of subterfuge I had to engage in. Immediately after the Atlas-influenced revised CDC testing guidance went up in late August, I contacted Bob Redfield. He confirmed my suspicions: he had disagreed with the guidance, but had felt pressured by HHS and the White House to post it. Also, many on his staff in Atlanta were still comfortable prioritizing symptomatic individuals. Even at this late point, eight months into the pandemic, many at both the White House and the CDC still refused to see that silent spread played a prominent role in viral spread and that it started with social gatherings, especially among the younger adults. We had to find a way around them. Recognizing the damage to public health the Scott Atlas–driven testing guidance could do and was doing with testing rates dropping across the country, Bob and I agreed to quietly rewrite the guidance and post it to the CDC website. We would not seek approval. Because we were both quite busy, it might take a week or two, but we were committed to subverting the dangerous message that limiting testing was the right thing to do.

As this was going on, Republican figures like Mowers were running cover for the scarfed bureaucrat: 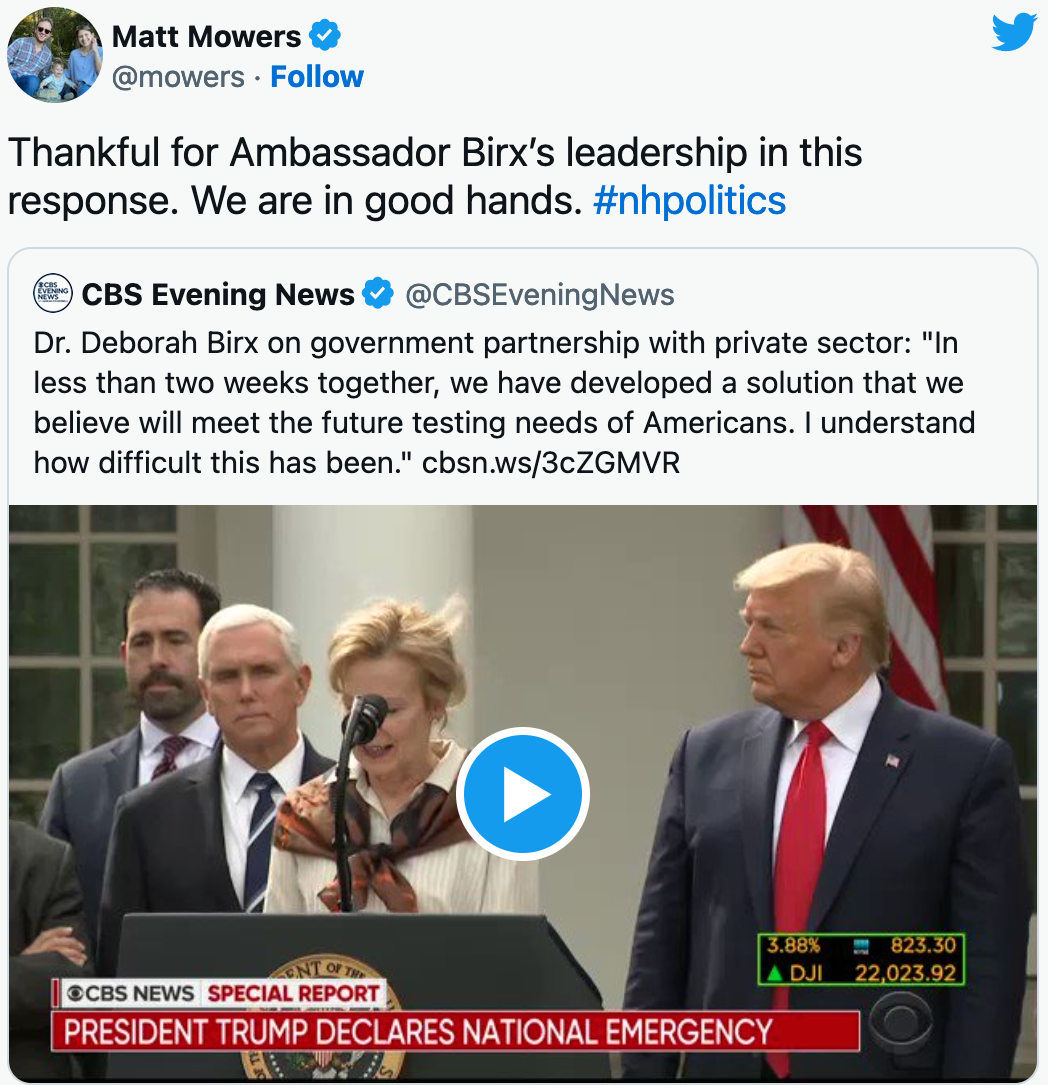 Worse still, Birx claimed to offer little contrition over her outright insubordination, when challenged on the matter by then-White House Chief of Staff Mark Meadows:

“On September 18, I was still on the road—in Arizona again, for a meeting with those conducting proactive testing at the University of Arizona—when Mark Meadows’s name and number flashed across my White House–issued smartphone.

“What the hell do you think you’re doing? You rewrote and posted the CDC testing stuff.”

I explained why I had done it. We’d already seen the drop in testing numbers resulting from Scott Atlas’s dangerous guidelines. Those few pages we’d rewritten would change how states could test, and we’d prevent even more community spread going into the dangerous winter ahead. Mark Meadows took this in and then, biting off each of his words, said, “You went over everyone else on the task force’s heads. You went around the whole approval process. You do not make unilateral decisions. It’s that simple. Period. End of sentence. Understood? Don’t ever do this again.”

“Understood. I did what I needed to do.”

“Don’t do that again without talking with me first.”

The news will raise questions about the work of Birx and those around her in the White House, and whether or not she acted illegally during her employment. The developments could also cost Mowers – whose lead in the New Hampshire 1 Congressional race has narrowed in recent months. 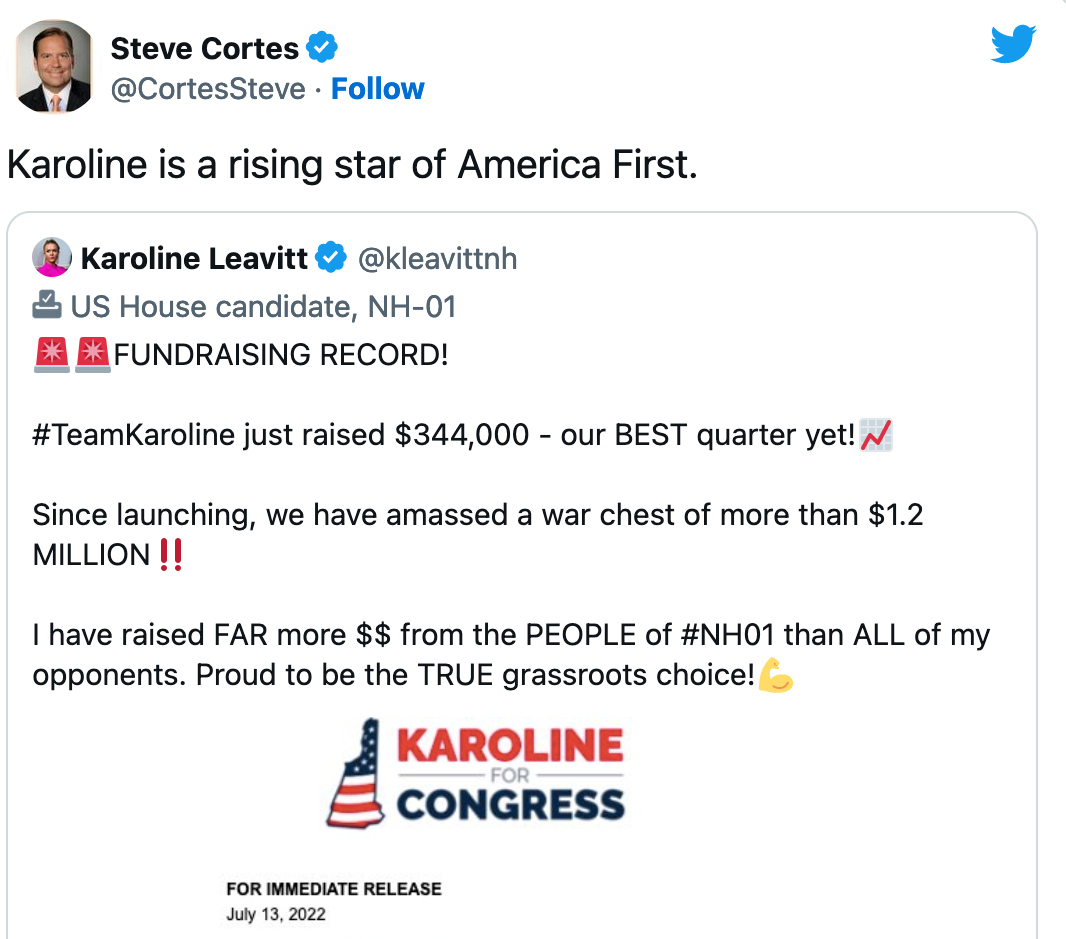