WHY I’M NOT GOING TO BURNING MAN THIS YEAR

by Daniel Pinchbeck (from Reality Sandwich)

I have gone to Burning Man 15 years in a row. When I went the first time, back in 2000, I was a journalist on assignment for Rolling Stone. That was an amazing introduction to the event, as I was able to go “back stage” and meet the organizers, artists, and geniuses behind the sculptures, lasers, and camps. I was immediately hooked. I couldn’t believe such a place existed – that tens of thousands of people shared the same ideals, and worked together to realize their visions.

I wrote this piece about my experiences. I also wrote a feature about the festival for ArtForum. By proposing that Burning Man had validity as an artistic expression – I discussed Joseph Beuys’ idea of “social sculpture” – I got banned from ArtForum after they published my piece. I also wrote about the festival, personally and philosophically, in Breaking Open the Head, my first book, and 2012: The Return of Quetzalcoatl, my second. Burning Man has had a profound experience on my life, in many ways.

This year, I am skipping it. There are a few reasons for this, but the main one is that I feel Burning Man – an institution in its own process of ongoing change and evolution – has lost its way. Hopefully, this is temporary. I know and love many of the people who create and run the festival, and believe in their intentions and their vision.

Burning Man has accomplished amazing things, opening up whole new realms of individual freedom and culture expression. At the same time the festival has become a bit of a victim of its own success. It has become a massive entertainment complex, a bit like Disney World for a contingent made up mostly of the wealthy elite. It always had this vibe, to some extent, but it seems more pronounced in recent years. It feels like there is more and more of less and less. The potential for some kind of authentic liberation or awakening seems increasingly obscure and remote. 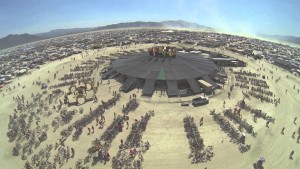 The change in Burning Man – admittedly it is subtle – is happening as our world slides toward ecological catastrophe. The ecological crisis has become my almost monomaniacal focus recently. From my perspective, it is crucial that people awaken to what is happening to our Earth. We need to quickly understand and then start making the changes necessary to ensure the continuity of our ecosystems. Part of my enthusiasm for Burning Man was that it seemed a place where a new human community could arise – a new way of being. This potential is still there – but it seems like it has been co-opted, distorted.

At Burning Man, there was always a tension between two world views, which I would characterize as libertarian hedonism and mystical anarchism. I feel, as a result of its rapid growth and, also, as the festival has become a magnet for the wealthy elite (the Silicon Valley crowd, the media moguls and their entourages, the Ibiza crowd, etc), it has tilted too far toward libertarian hedonism. Art cars have become the new yachts, representing expressions of massively inflated egos. Wealthy camps will drop hundreds of thousands on a vehicle, then parade it around, with a velvet rope vibe. Increasingly, the culture of Burning Man feels like an offshoot of the same mindless, self-interested, nihilistic worldview and neoliberal economics that are rapidly annihilating our shared life-world.

I remember, a few years back, I stayed near a camp that had been built for the founder of Cirq du Soleil, Guy de Liberte, and his friends. The camp was empty throughout the week. There were many beautiful gypsy caravan-style tents set up, awaiting the weekend visitors from Europe and Ibiza. There were also a few Mexican workers who labored over the course of the week, building shade structures and decorating the art cars. Nobody had offered these workers a place to stay in one of the carefully shaded luxury tents, so they had pitched their small nylon tent directly in the hot sun. That image seems to sum up where Burning Man has drifted, inexorably.

We lack a moral center in our society, and we are rapidly caroming toward the abyss. It is absolutely extraordinary – in itself, miraculous – that the new Pope, Pope Francis, has shown up as one of the only people in our entire planetary culture able to speak directly to the needs of our moment – he calls for an “ecological conversion,” for shared sacrifice on the part of the wealthy elite, a new mode of empathic and compassionate action for us all. In the Encyclical, Care for Our Common Home, Francis writes:

All-powerful God, you are present in the whole universe
and in the smallest of your creatures.
You embrace with your tenderness all that exists.
Pour out upon us the power of your love,
that we may protect life and beauty.
Fill us with peace, that we may live as brothers and sisters, harming no one.
O God of the poor,
help us to rescue the abandoned and forgotten of this earth,
so precious in your eyes.
Bring healing to our lives, that we may protect the world and not prey on it,
that we may sow beauty, not pollution and destruction.

Is it possible that Pope Francis could rehabilitate the Catholic tradition, which seemed utterly hopeless, corrupt and antiquated, and turn it into a progressive force for good? We are going to need a number of miraculous conversions and transformations such as this one, if we are going to survive as a species, and learn to flourish together with nature, in the short time before it is too late to do anything but undergo a universal, horrific meltdown – a Chod ritual, on a planetary scale.

As I wrote in my books, I believe Burning Man represents an organic expression of something innate to human being-ness: We need initiatory experiences – centers where non-ordinary states of consciousness can be explored and, also, interpreted, with a shared context for understanding and integration. Emerging from the psychedelic culture of the Bay Area, Burning Man is, to a certain extent, a postmodern reinvention of centers of Mystery School wisdom, like Eleusis, which the artists, philosophers, and leaders of the Classical World visited each year. However, at this point, it lacks a deeper awareness of its own value and purpose. Without this, it is in danger of becoming another appendage of the military-industrial-entertainment complex – another distraction factory.

I find that many people I know are living on the razor-edge of nihilism right now, skating the edge of the Void. In my own life, I have lived through the eruption and the projection of my own shadow material – and I see many people undergoing their own versions of this, in different areas of their lives. I can’t help but see this as a perfectly appropriate and even necessary part of a process that could lead to our apotheosis as a species (the birth of the Ubermench, who according to Nietzsche, represents the fusion of “the mind of Caesar” with “the soul of Christ”) or our collective dissolution. It is exciting that this process seems to be happening within our current lifespans.

The infusion of Eastern metaphysics into the Western worldview is not necessarily helping, and it may actually be exacerbating our current crisis of values. The popular Buddhist monk Thich Nhat Hahn has recently noted that, within 100 years, the human race may go extinct. His perspective is accurate, according to scientific predictions. He notes, with an accelerated warming cycle like the one that caused the Permian Mass Extinction, 250 million years ago, “another 95 per cent of species will die out, including Homo sapiens. That is why we have to learn to touch eternity with our in breath and out breath. Extinction of species has happened several times. Mass extinction has already happened five times and this one is the sixth. According to the Buddhist tradition there is no birth and no death. After extinction things will reappear in other forms, so you have to breathe very deeply in order to acknowledge the fact that we humans may disappear in just 100 years on earth.”

There is a kind of fatalism to Buddhist thought that doesn’t mesh with our Western approach to reality. Personally, I find myself resonating far more deeply with the Pope’s call for a new spiritual mission that unifies humanity behind protecting life and nature, than I do with Hahn’s view, although I recognize the validity of his statement. Ultimately, there is only the white light of the Void, which certain psychedelic experiences – particularly 5-meo-DMT – experientially confirm. However, there are many other dimensions of being and levels of consciousness we can know and experience. We also possess creative, empathic, and imaginative capacities, which seem be a divine power and dispensation. I think it would be truly amazing if we chose to make use of our deepest abilities to reverse the current direction of our society – to confront the ecological mega-crisis as a true initiation, and offer ourselves as vessels of this transformation.

In order to accomplish this, we would need to overcome our desire for spectacular distraction and insatiable consumption. Burning Man has always drawn its imaginative power from the paradoxes which are essential to it. A huge amount of money, energy, time, and fossil fuel is expended to create conditions which are difficult and force people (except for those wealthy enough to have air-tight sanctuaries built for them) to undergo a certain level of inner confrontation. I think we could further generalize from this, realizing that difficult and uncomfortable conditions are, in fact, necessary for our own development.

I will wrap this up, for now. The main point is there are many crucial lessons to learn from Burning Man: In many ways, it reveals our innate capacities to build a new society, a redesigned society, based on creativity, community, inspiration, and compassion. At the same time, Burning Man has become another spectacle – another cultural phenomenon, in a sense, a cult – and one that sucks a huge amount of energy and time from people who could re-focus their talents and genius on what we must do to escape ecological collapse (building a resilient or regenerative society). The organization, itself, needs to undergo another level of self-analysis and transformation – much like the Catholic Church appears to be doing, under Pope Francis’ lead.

In order to survive what’s coming, we must find a way to awaken a new spiritual impulse in the human community, beginning with our cultural, technocratic, and financial elites. And we don’t have time to waste.