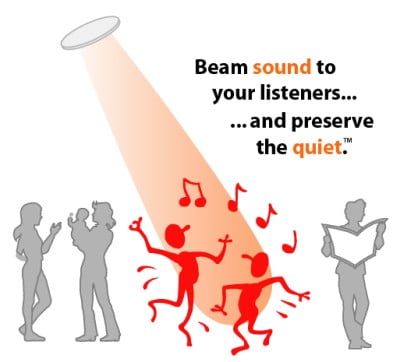 Corey Goode answered a question about “The Voice of God” technology which is used on unsuspecting people to put voices in their heads.  A quick search for this technology does appear online in a few sources and is even mentioned on some mainstream media websites.  Further research points to different names for this suppressed military technology.  Here is a quick list of names for researchers to dig further into this disruptive tech.

Apparently the military has used this weapon during the Iraq war in order to create chaos within the ranks of the enemy combatants.  Here is an excerpt from the Strategy Page report on the use of LRAD aka “The Voice of God”

It appears that some of the troops in Iraq are using “spoken” (as opposed to “screeching”) LRAD to mess with enemy fighters. Islamic terrorists tend to be superstitious and, of course, very religious. LRAD can put the “word of God” into their heads. If God, in the form of a voice that only you can hear, tells you to surrender, or run away, what are you gonna do? ~strategypage.com

Another interesting find shows that the United States Army did have an old dedicated webpage that talked about the technology but pulled down the page as soon as researchers got hold of the information and started to share it.  Some researchers took snap shots of the webpage and also cached it on other sites for proof that the military does in fact use this invasive technology.

There is even a company called Holosonics that sells a very similar technology for marketing purposes called “Audio Spot Light”. Seelink here.  Here is a commercial company called LRAD Corp. that sells products called Long Range Acoustic Devices.  Their website is at this link here.  Even CNet wrote an article describing the marketing & advertising aspects VOG which can be read at this link here. This may seem like a harmless technology but there are reports that black ops military use it against people to drive them to commit suicide and murder other people.  Here is some additional information about the sinister side of the Voice of God.  See link here or watch this video on YouTube at this link here and another video here about these mind control weapon technologies.

Here is Corey Goode’s response about the “Voice of God” technology.

Can you tell us more about this technology called “The Voice of God” where people hear voices in their head?

Yes, this technology uses “Bio-Neural Interface” methods that have evolved over the decades since it was developed. The older LF/ELF frequency VOG devices could focus on an individual in a crowd but after a certain range the “blooming affect” caused a loss in its desired effect. The more recent technology can now focus on an individual from a drone aircraft or even Low Earth Orbit.

Depending on the model and settings it can be used to maintain point to point communications with operatives in the field, cause an unsuspecting person to hear voices through vibrations in their skull and brain matter or even download audio, olfactory and visual data directly to their neurological systems. As SOP operatives are exposed to this technology to be able to recognize when they are being targeted.

The people that create the data or reality constructs that are “downloaded” are called “Programmers”. This VOG technology is heavily used on people who channel as well as “Targeted Individuals”. It can produce hallucinations that are incredibly realistic. Heavy use of this technology over a long period of time will induce Paranoid Schizophrenia in people who would otherwise never have developed this disorder.

It is a very nasty and dangerous technology that is widely used against the public. It has been a major tool to spread misinformation through the “truther movement” and to discredit legitimate contacts and communications with non-terrestrials. It has been used with a large amount of success in creating competing narratives to cause schisms between followers of various esoteric groups.  VOG technology is currently in use as of the date of this response. ~http://spherebeingalliance.com/faqs/791-can-you-tell-us-more-about-this-technology-called-quotthe-voice-of-godquot-where

For those scientific minds or people who want to take a look at the detailed research about the Voice of God technology may want to look at the paper written by John McMurtrey in 2003 entitled “REMOTE BEHAVIORAL INFLUENCE TECHNOLOGY EVIDENCE”.  Here is the source link for this article….. https://www.freedomfchs.com/remotebehavioralinfltech.pdf