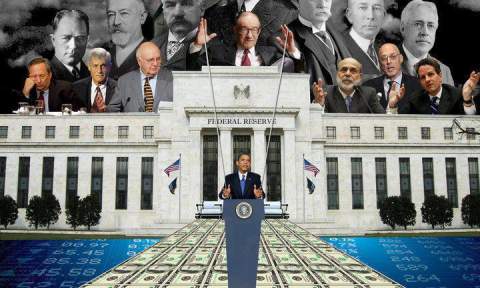 NATIONOFCHANGE / NEWS ANALYSIS
Published: Monday 5 May 2014
The secret cabal’s control over international markets is becoming less of a mystery as increasing numbers of markets reveal themselves so obviously to be fixed.

Just in case you haven’t been keeping up with the ‘tin-foil’ hat conspiracies, increasingly proven to be true, the Federal Reserve Bank of New York, is the center of a secret global economy that has bailed out American International Group Inc., huge insurance companies like AIG, Goldman Sachs Group Inc., Merrill Lynch & Co., J.P. Morgan,Societe Generale and Deutsche Bank AG, among others.

The secret cabal’s control over international markets is becoming less of a mystery as increasing numbers of markets reveal themselves so obviously to be fixed. The cabal cheats the 99 percent with Libor interest rates, foreign exchanges, and gold, silver, and platinum price fixing. Then there’s high-frequency trading (HFT), where Wall Street banks use supercomputers to monitor incoming stock market orders, analyze their likely impact on prices, and place orders ahead of those trades to capture a bit of the price impact, called ‘stealing’ if it were properly named.

HFT data helps to explain the frenzy in today’s markets: The most aggressive firms tend to earn the biggest profits, hence the incentive to trade as quickly and as often as possible. Furthermore, these traders make their money at the expense of everyone else, including less-aggressive high- frequency traders. It is simply the latest and greatest scam on stock holders looking for real value in a company, thinking they can compete with the big guys.

Just a few weeks ago, 132 nations decided they’ve had enough of the ‘secret’ money jig we’ve all been dancing to. One of the largest coalitions of developing nations in history has urged Secretary-General of the United Nations Ban Ki-moon, to provide, “as soon as possible…alternative options for banking services.” 132 countries, including China are done with the funny money scheme.

This comes on the heels of a mass cancellation of bank accounts in U.N. missions and those of foreign US diplomats. The G77 urges the secretary-general to review the “U.N. Secretariat’s financial relations with the JP Morgan Chase Bank and consider alternatives to such financial institutions and to report thereon, along with the information requested.”

NationofChange is a 501(c)3 nonprofit funded directly by our readers. Please make a small donation to support our work.

JP Morgan is the left arm of the cabal, along with other ‘big banks’ who were benefactors of billions in our tax money. They have shorted silveralong with Citibank to increase their physical silver holdings by 500%. They are also the ‘big bank,’ along with Chase that failed to stopPonzi-schemer Bernard Madoff. Why do that? He was cut from the same clothe as their top executives.JPMorgan Chase & Co CEO Jamie Dimon pleaded with and complained to the U.S. Justice Department a few years back but couldn’t convince the government to end its criminal probe of his bank because prosecutors couldn’t figure out just how crooked this banking system really was.

Banks like these helped crash our economies, and they are trying to do the same now, so that they can profit from it.

The problem for countries around the world is simple: Chase bank currently handles billions in accounts maintained by the United Nations and its agencies, in guess where – NEW YORK CITY.

The countries express a ‘deep concern’ over the decisions made by several other banking institutions, known puppets for the cabal, including JP Morgan Chase, in closing bank accounts for mostly developing countries. The resolution proposed, still subject to amendments cites a 1947 agreement between the US and UN, which:

It also points out the 1961 Vienna Convention on Diplomatic Relations as a regulatory framework for states and international organizations, specifcically the working relationship between the United Nations and the City of New York.

The countries have put forth the G77 as a means to utilize, “all necessary measures to ensure permanent missions accredited to the United Nations and their staff are granted equal, fair and non-discriminatory treatment by the banking system.”

At secret meetings around the G77 last month, representative after representative from these countries severely criticized the American banking system from cutting off banking services from the diplomatic community, specifically directing their outrage at JP Morgan Chase (formerly Chemical bank).

The accounts were closed when a request from the US treasury asked banks to report every single transaction of 70 ‘blacklisted’ diplomats as part of a monitoring system, just a new way that bankers are spying on all of us. Aside from a network of cameras, run buy the NSA, and a program with a codename of ‘Dishfire’ they also now indulge in practices which make you no different than America’s ‘enemies,’ or diplomats of emerging economies sick of being bullied by the petro-dollar:

1.  Every time you swipe your credit or debit card, the transaction is scored to gauge the risk of fraud.

2.  Banks use ‘behavior’ scores to figure out how you consume and deny you credit or increase your mortgage rates based on that behavior.

3.  Deposit behavior is also gauged. If you save a little or a lot, they are watching that and plugging in the data to determine whether or not to lend you more funny money.

4.  Investments and income are assessed utilizing a ‘wealth estimator.’ This also affects what financial products you have access to, and what you will pay for them.

5.  Both US and UK spy agencies avert internet encryption to look at your private emails, medical information and banking habits.