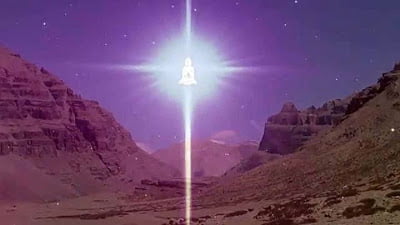 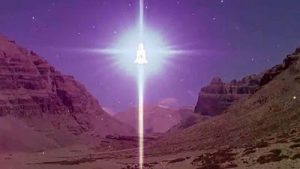 Time has come to release a great portion of the Ascension Plan for this planet.

The Ascension window has opened on this planet on May 25th, 1975, had its turning point on August 11th, 1999 and will close on July 7th, 2025. It was always the plan of the Light forces to clear the primary anomaly of darkness and to trigger the Event within this time window, and that plan did not change.

This time window has its basis in the scientific fact that solstice Sun is completely aligned with the Galactic equator within the 1975-2021 timeframe, and this alignment is perfect within the 1980-2016 timeframe: 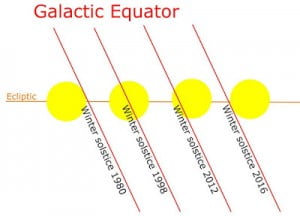 Solstice Sun / Galactic equator alignment occurs twice in the precessional cycle of 26,000 years. Actually, the precessional cycle is perfectly entrained with the pulse of the Galactic heart, which sends a Galactic superwave into the spiral arms of the Galaxy every 26,000 years. So each solstice Sun / Galactic equator alignment occurs right at the time of the Galactic superwave, either a large one which occurs every 26,000 years, or a mid-cycle one, which occurs 13,000 years after each large one:

Luckily for us, the Galactic superwave we are awaiting is the mid-cycle one, and will be significantly milder that the previous one that has caused the Gothenburg geomagnetic reversal, the terminal Pleistocene mass species extinction 13,000 years ago and consequently the deluge of Atlantis.

Yet it will be strong enough to dust off all darkness from our Solar System, peel it off from the surface of the planet and trigger the Event.

The central point of this cosmic transformation was already determined 26,000 years ago and was set around the date of the fixed cross total Solar eclipse on August 11th, 1999.

That central point is remarkably close to the exact date of the solstice Sun / Galactic equator alignment. Astronomer Jean Meeus has calculated that this alignment occurred in May 1998. Smelyakov has refined that date to May 7th, 1998:

The Pleiadians have communicated to me that the exact date was May 17th, 1998. This is the day when the destiny of this planet was decided and when the Light forces knew for sure that the Ascension plan will be successful.

After the opening of the Ascension window in 1975, a lot of Light from higher dimensions began streaming in towards the surface population and that triggered the mass awakening of the genuine New Age movement in 1980s. Alas, the Ascended beings were not aware of the full extent of the power of primary anomaly and could not stop the dark forces operating in the shadows. The dark ones have infiltrated the New Age movement, infiltrated the Solar Warden space program and finally took over the planet and the Solar System in early 1996.

Between 1996 and 1998, the Light forces were overshocked and had to regroup, and the Ascension plan had to be upgraded. The Pleiadian fleet began to re-enter the Solar System in 1998 and on May 17th, 1998 received parts of the new Ascension plan from „higher sources“. The Ashtar Command began to re-enter the Solar System in early 1999 and has evacuated the majority of Earth humanity to Pleiades in August 1999.

Before 1999, Earth humanity consisted of about 70 billion souls on etheric and astral plane and about 6 billion incarnated humans.

The majority of 70 billion non-incarnated human souls were mass evacuated on August 14th, 1999 to the motherships of the Ashtar Commnad and then transported to a certain planet on the outskirts of the Pleiades star cluster where they started receiving much needed healing.

The only souls remaining on etheric and astral plane were those who were direct hostages of the non-physical Archons, those with strong attachment to the physical plane and those who decided to stay to help the physical humans as spiritual guides.

Between 1998 and 2016, the Light forces have kept the Ascension plan strictly confidential to prevent the dark ones from interfering with it. Many channels and intuitives tried to access the Ascension plan but did not receive any signal.

I have now received the green light to reveal one part of the Ascension plan to the surface population.

Ascension is both an individual and a group process. Each individual will go through his own inner experience, going through healing, release of the past and inner transformation. With many people going through the same process at the same time, this will reinforce the Light field around the planet and open the door for many that otherwise could not make it. The length of the complete Ascension process is expected to be a few years for the most advanced individuals, and more for others.

The actual Ascension happens when we release all blockages to the energy flow and reach superconductivity of our mental, emotional, etheric, plasma and physical bodies.

There is much more to this and I will release more when I receive the clearance to do so.

At the moment of the Event, the Light forces will contact humanity only indirectly with intel releases through the mass media. After the completion of the Cabal arrest process and after the majority of humanity overcomes the initial shock, the Light forces will begin to contact certain individuals directly. This will most likely start a few weeks to a few months after the Event.

At that time, contact zones will be created. Contact zones are areas on private property where the owners will dedicate part of their land for the contact experience. These owners will then experience a physical contact with the Pleiadians that will land on their land in a small beamship. Those individuals will go to the mass media and report their experience, therefore preparing humanity for the reality of the Contact. These contact zones will become more and more numerous until a certain critical mass will be reached for the First Contact. First Contact is the beginning of official diplomatic relations between Earth humanity and positive ET races. This is planned to occur roughly a year after the Event at the United Nations and will be broadcast through the mass media worldwide.

After the First Contact, the positive ET races will begin to distribute their advanced technologies that will quickly bring the Earth humanity into the fifthdimensional golden age.

At the same time, many awakened individuals will start to relocate to create intentional communities, so called areas of Light. With non-physical Archon influence removed, they will learn in those communities to finally live together in harmony, with each individual following his higher purpose and together creating a beautiful mandala of Light. Areas of Light will grow and evolve, their vibrational frequency will lift and in a few years they will connect with the motherships of the Ashtar Command with columns of Light. These columns will accelerate the group Ascension process.

Ascension chambers are a very advanced positive organic technology that lifts our vibrational frequency and is a great tool to help in our Ascension process. They will be used after the First Contact to speed up the Ascension process for those that are ready.

After the First Contact, the ships of the Ashtar Command and the Galactic Confederation will be more and more visible as they will decloak at their positions throughout the Solar System.

This is the best description of the Ashtar Command and the Galactic Confederation that I could find on the surface of the planet:

And a quite reliable, visually beautiful description here which will help you visualize our life after the Event:

Until then, you can ask the positive ET beings for help in your daily life and here is an example:

The Light forces of the Ashtar Command and the Galactic Confederation are sending signs that victory is near.

Like this V (victory) sign that appeared exactly at the midpoint between my two past conferences in Laguna Beach and Irvine: