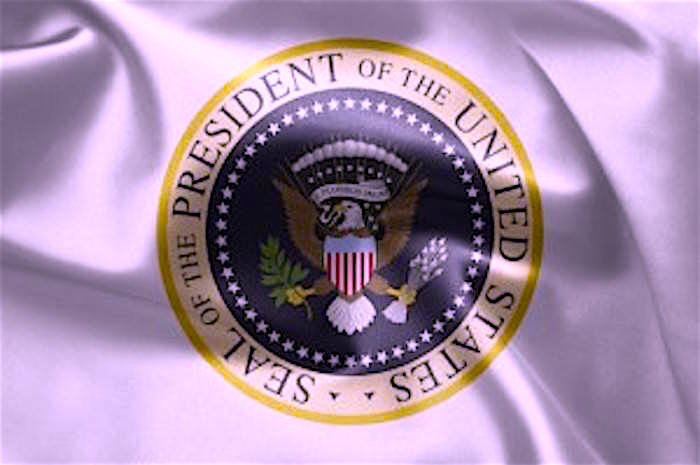 What if there were a 2016 presidential candidate who proposed banning fluoride, aspartame and fracking, protecting the right NOT to be vaccinated, working with the Alternative Media instead of the Mainstream Media, legalizing marijuana/hemp/cannabis, stopping police brutality and militarization and breaking up Monsanto?

What if I told you this 2016 presidential candidate also proposed ending predatory banking, ending the Fed, banning geoengineering, opposing transhumanism, reforming the CIA, establishing a truth process in government, honoring Edward Snowden as a hero and re-investigating 9/11? What if I further told you that this 2016 presidential candidate proposed stopping the US from its stupid and unnecessary proxy wars against Russia, getting the government to come clean about occult NASA and its claims about putting men on the moon, disclosing the Secret Space Program and disclosing the truth about secret technologies like time travel, free energy and the existence of extraterrestrials to the public? Sounds to good to be true, but such a person exists.

What if I told you this 2016 presidential candidate were not Sanders, Trump, Clinton, Cruz, Kasich or indeed anyone from a major party, but rather a figure unknown to the general public but well known to some in the alternative research community? That’s right – I am talking about Andy Basiago, the man who claims he was part of Project Pegasus, a secret black military operation (under DARPA and the CIA) in the 1960s and 1970s that involved teleportation to Mars and participants such as Barack Obama, Dick Cheney, Regina Duran and Buzz Aldrin.Andy Basiago – 2016 Presidential Candidate

Andy Basiago first came on the scene as a whistleblower with an incredible firsthand story of Project Pegasus. Andy has since done many presentations and interviews describing what happened, but for those who have never heard of him, here is a brief overview of his testimony.

Andy claims he was part of Project Pegasus (run by DARPA, part of the US Department of Defense, which stand for Defense Advanced Research Project Agency) as one of America’s early time-space explorers during the period 1969-72. He reveals how the CIA utilized “quantum access” technology (the ability to collect data from the future), include teleportation technology (the “Jump Room” to Mars), time travel technology and other technology that allowed them to see into the future (e.g. the chronovisor). He claims the US has been teleporting individuals to Mars for decades, and recalls his own trips he took to Mars in 1981. (As an aside, in a more recent interview with Lisa Harrison, Andy considers the idea of a flat earth as a real possibility. He revised his idea that he went to Mars and instead claimed he may have gone to what he calls a SQE (Synthetic Quantum Environment) that he was told was Mars, but which could really have been anywhere. It is a brave gesture to admit when you may have been wrong, and shows a lot of maturity and a deep commitment to the truth.)

Notably, at least 6 other whistleblowers have come forward to offer corroboration of his testimony about going to Mars, including Bernard Mendez and William Brett Stillings (who state they were part of the same Project Pegasus), Michael Relfe, Randy Cramer (or Captain Kaye) and Arthur Neumann (3 other men who went to Mars in other secret military programs and later broke through mind control programming to recover their memories), and Laura Eisenhower (who was attempted to be recruited but never actually set foot on Mars).

Reading through Andy’s 100 campaign proposals is an experience in itself! What other 2016 presidential candidate could possibly match the scope of Andy’s understanding of the extent of the conspiracy, suppression and attempted enslavement we face? He has taken a clear and determined on stand on virtually every issue of importance, from human rights (ending hunger, poverty, homelessness and gender inequality), health and medical freedom (increasing awareness about sugary junk foods, banning fluoride and aspartame, opposing vaccines, pesticides, GMOs and chemtrails/geonengineering, and legalizing cannabis/hemp/marijuana), privacy (curbing surveillance), money (curbing predatory banks and ending the Federal Reserve) and foreign policy (stopping the neoconservative-Brzezinski-Wolfowitz doctrine philosophy of encircling and attacking Russia), transparency (enforcing truth in government, searching for the missing $2.3 trillion former Secretary of Defense Rumsfeld just misplaced and couldn’t account for the day before 9/11). Most impressively, he is trying to do what JFK couldn’t quite manage: to come fully clean on the government’s involvement with aliens or extraterrestrials, including the use of secret advanced technology (including free energy, time travel, teleportation and interplanetary travel).

Below I have reproduced 10 of his most impressive proposals. Check out his website (andy2016.com) for the full list. Spread the word about this guy. You may or may not believe his whole story about his involvement in secret military operations and time travel (although he does provide great detail and his story contains themes corroborated by others), but you have to admit – Andy has a great comprehension of the issues that face America and the world, and a steadfast commitment to truth and freedom. Even if he doesn’t garner many votes, his voice and message need to be given a wider platform to reach audiences, plant seeds and wake people up, because obviously, the lamestream mainstream media isn’t going to cover him. Share this article freely. 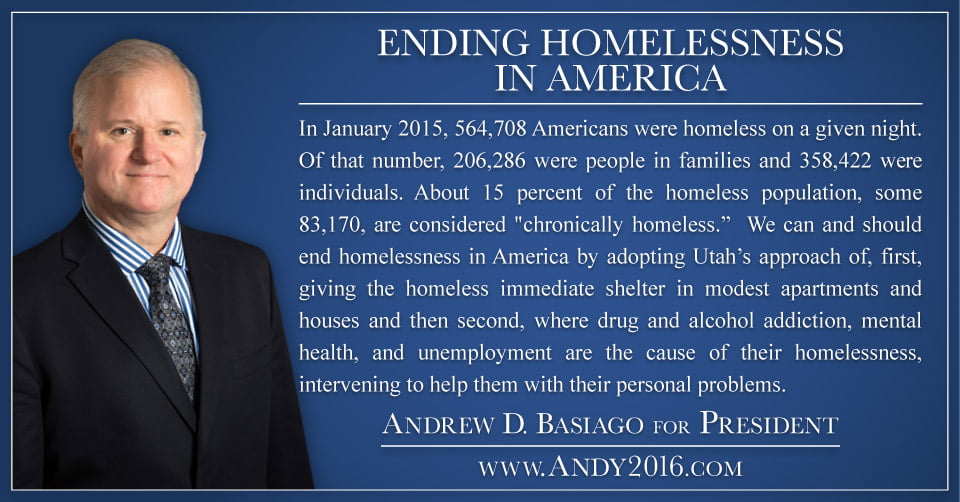 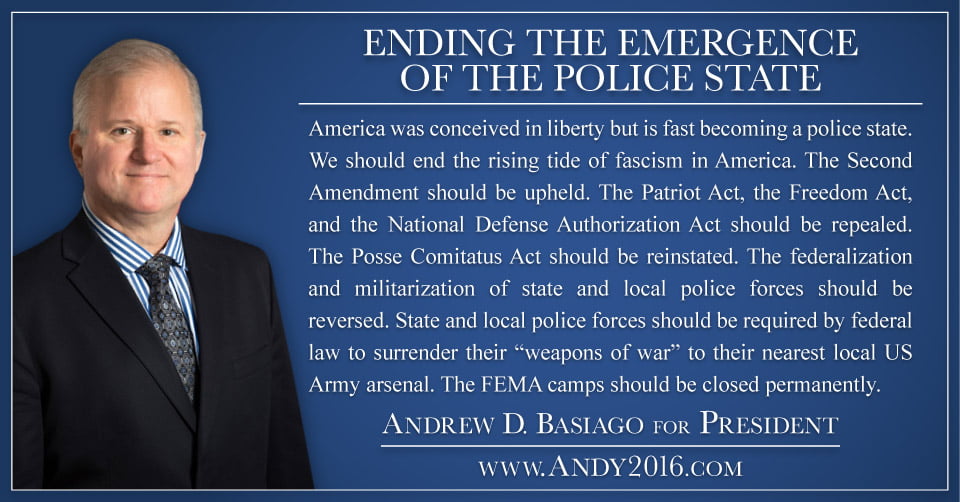 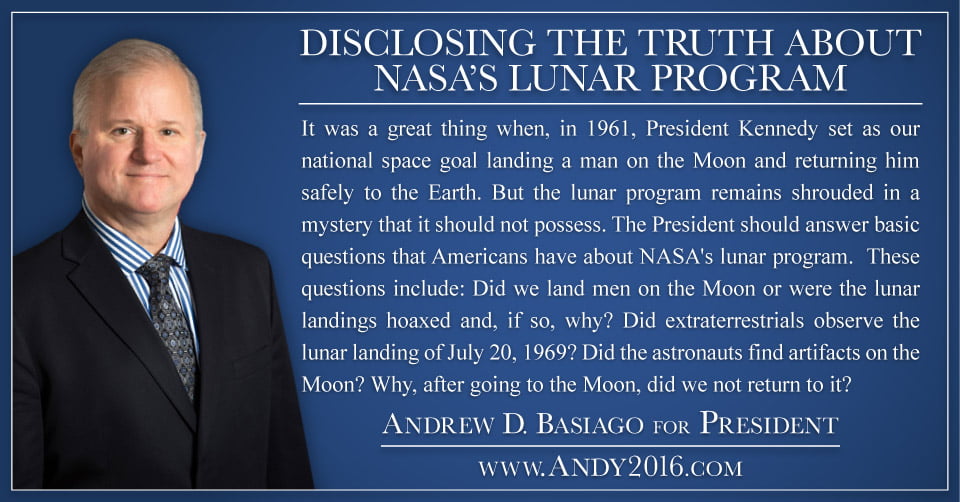 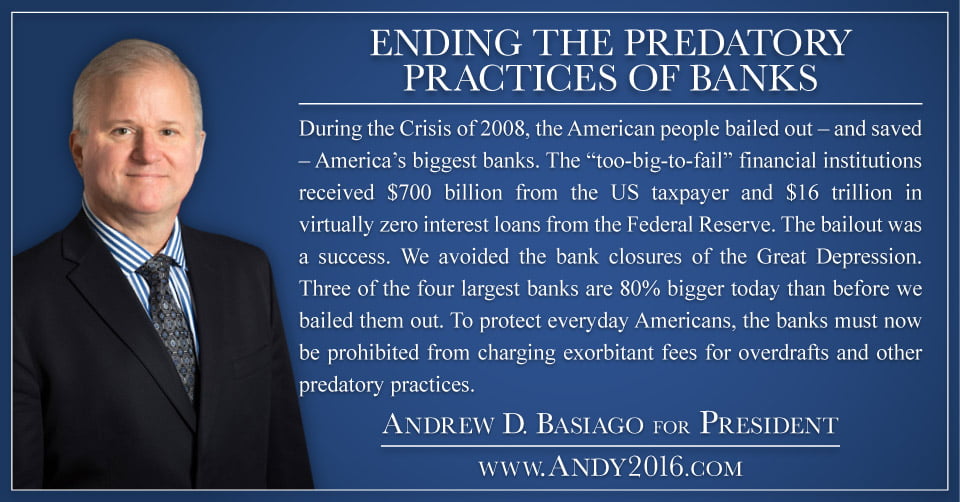 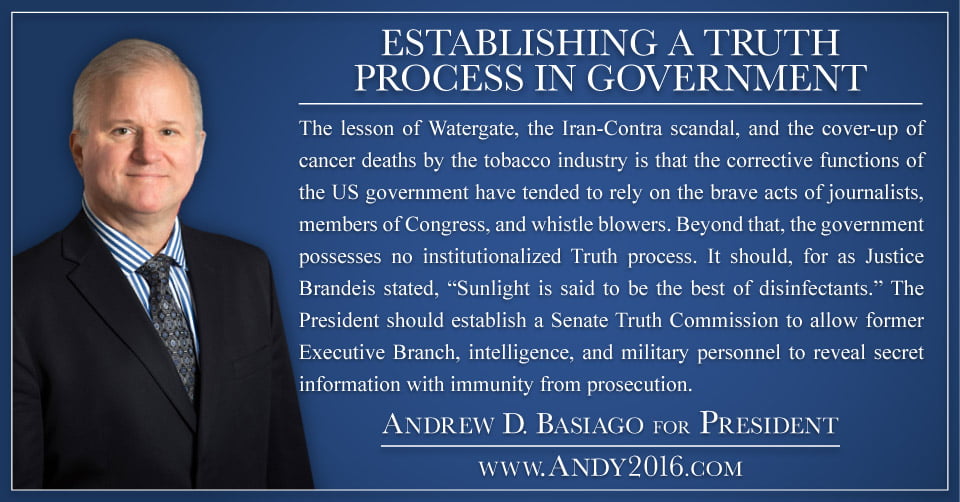 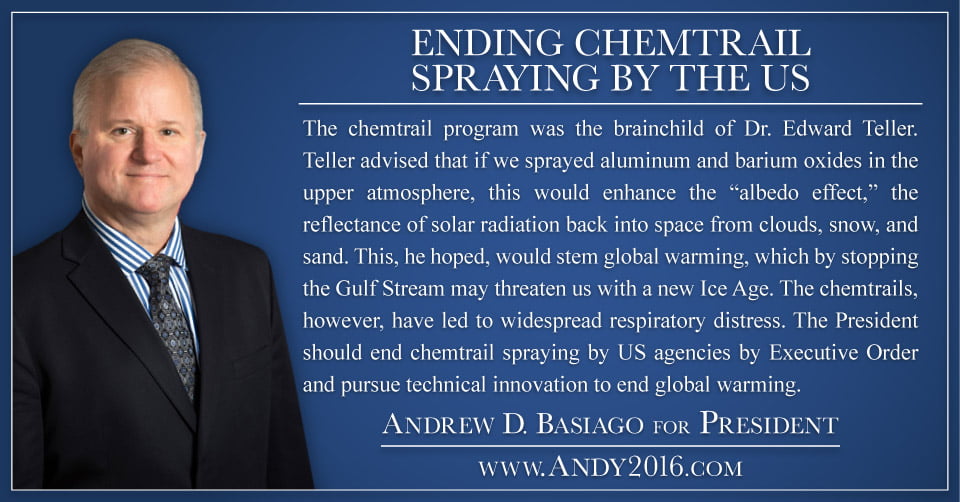 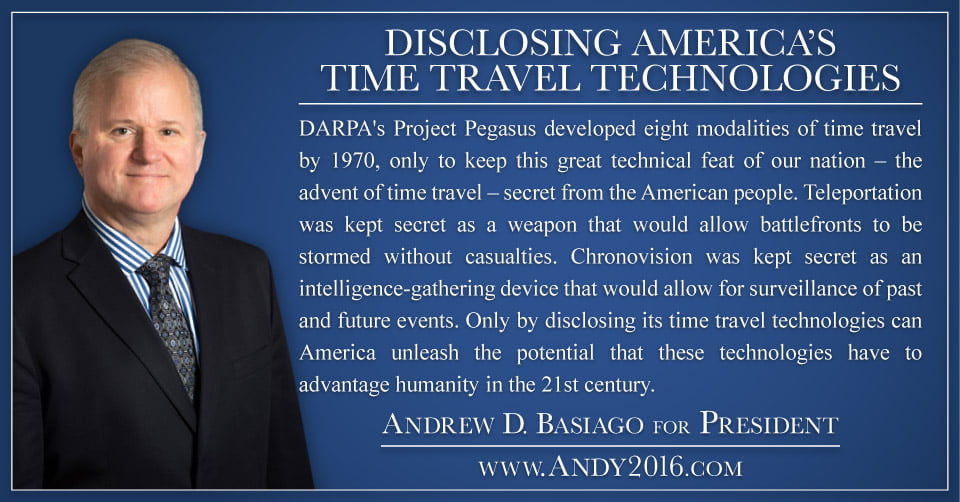 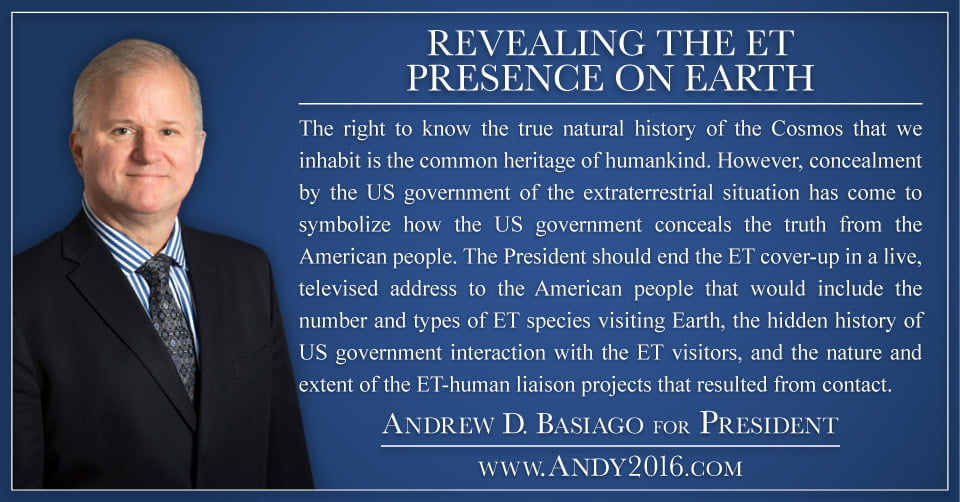 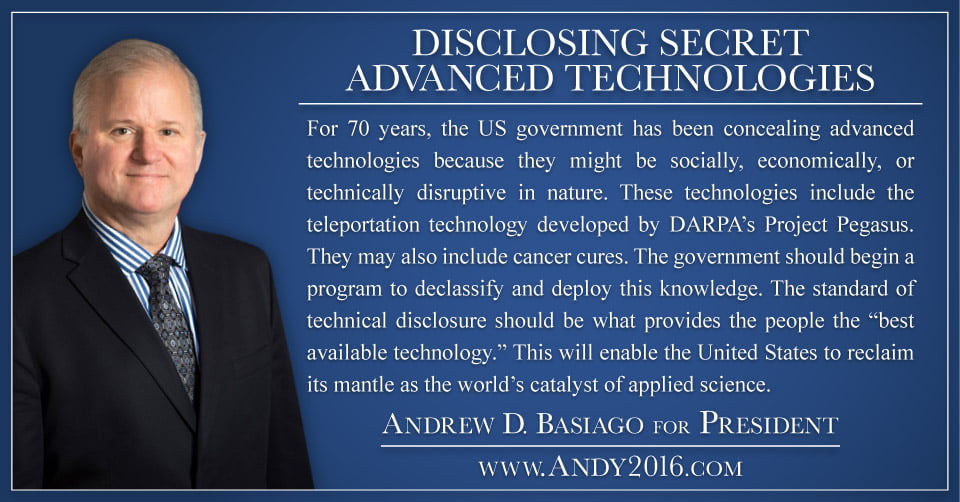