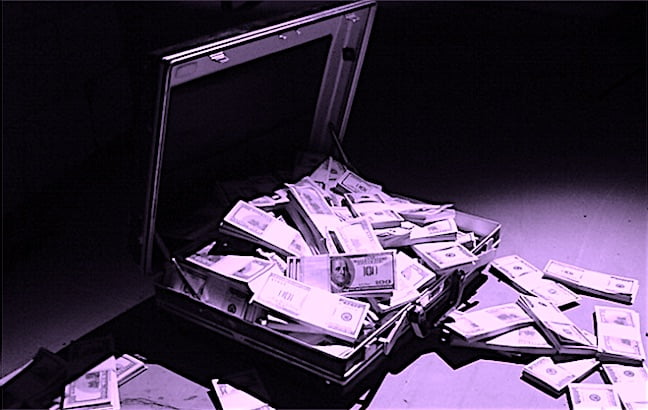 It is the UK’s lead agency against organised crime; human, weapon and drug trafficking; cyber crime; and economic crime that goes across regional and international borders, but can be tasked to investigate any crime.

Both the NCA and government are acutely aware of the scale of money laundering in Britain that they now admit is completely out-of-control.

In a report by the Treasury and Home Office it clearly stated its concerns but attempts to gloss over its seriousness – “The same factors that make the UK an attractive place for legitimate financial activity – its political stability, advanced professional services sector and widely understood language and legal system – also make it an attractive place through which to launder the proceeds of crime.”

The true amount and scale of money laundering in the UK is not known. Banks are by far the biggest problem. They use complex corporate structures and offshore vehicles to conceal ownership and facilitate the movement of criminal assets designed to baffle the authorities and they do so with impunity.

“The best available international estimate of the amount of money laundering is equivalent to some 2.7% of global GDP or US$1.6 trillion in 2009. The NCA assesses that many hundreds of billions of pounds of international criminal money is laundered through UK banks, including their subsidiaries, each year. The scale of the laundering of criminal proceeds is a therefore strategic threat to the UK’s economy and reputation. The proceeds of virtually all serious and organised crime in the UK as well as the proceeds of a significant amount of international serious and organised crime (including corrupt Politically Exposed Persons seeking to launder the proceeds of their corruption and hide stolen assets in the UK) is believed to be laundered into and through the UK.”

Nick Maxwell, the head of advocacy and research at Transparency International (TI)  said last October “It puts beyond any doubt that vast sums of money from the proceeds of corruption around the world are flowing into the UK, and our system for stopping it and preventing it isn’t fit for purpose.” TI have also stated that $2 trillion is the likely annual sum for money laundering worldwide as has the United Nations on Drugs and Crime (UNODC) and that the problem lies predominently with the banking industry – “money in the form of symbols on computer screens can move anywhere in the world with speed and ease.”

Given the statement by the NCA it is fair to say that British banks could be the facilitator of one quarter of all money laundering in the world today with the City of London now classed as the global money-laundering centre for the drug trade, says a crime expert. He found that banks were welcoming dirty money because they need cash, liquidity during the financial crisis, that is ongoing.

A first attempt at tackling the problem by the NCA was in its 2014 paper entitled “High End Money Laundering – Strategy and Action Plan” where it was made clear at the outset that “we do not have a clear view of the scale of high end money laundering and its impact on the UK economy.” This is an admission that the authorities have lost control.

In the same year the head of HMRC David Gauke also produced a paper entitled “No Safe Havens” – where it said:

“We are stepping up our efforts to tackle offshore evasion. Under the Prime Minister’s leadership of the G8, the UK has led a global leap forward in tax transparency, meaning there are fewer places to hide. We will now make sure that there will be tough new sanctions for those who do not come forward under HMRC’s offshore disclosure facilities. Those who continue to believe they can hide wealth offshore must know that serious consequences await them.”

David Gauke is an MP who claimed £10,248.32 expenses back from taxpayers to avoid paying the stamp duty and fees involved in the purchase of his home in London. Ironic because it is not only shameless but puts him morally in the wrong place to hunt out tax evaders who buy property for large scale illegal laundering of cash.

In the meantime, two years after the HMRC’s statement of intent, the Public Accounts Committee (PAC) went to the lengths of describing its success of prosecuting offshore tax evasion as “woefully inadequate,” while it identifies HMRC’s failure to gather intelligence on losses through aggressive tax avoidance as an obstacle to improving the UK’s tax laws.

Claims from HMRC that “£1.5 billion has been recovered from offshore tax evaders over the past two years thanks to the Government’s tough and effective approach” were countered by the PAC by saying “It beggars belief that, having made disappointing progress on tax evasion and avoidance, the taxman also seems incapable of even running a satisfactory service for people trying to pay their fair share.”

For all of HMRC’s claims of an “intelligence led approach” and compliance, they have failed. This was no better demonstrated than the 950 lines of enquiry resulting from the so-called Lagarde List stolen from HSBC’s Swiss banking arm, where just one conviction was made by HMRC.

The Tax Justice Network published its findings just four months ago and amongst other things found that “The United Kingdom also remains a huge concern. Its global network of secrecy jurisdictions – the Crown Dependencies and Overseas Territories – still operate in deep secrecy and have, for instance, not co-operated in creating public registers of beneficial ownership. The UK has failed to address this effectively, though it has the power to do so.”

At the November G20 summit in Turkey, Prime Minister David Cameron said that world leaders had agreed to do more to share intelligence and cut off funding for terrorists through money laundering.

More recently, the British government’s CONTEST counter-terrorism strategy called for the UK to be a ‘hostile environment for terrorist financing’. In October 2015 publication of the inaugural UK National Risk Assessment of Money Laundering and Terrorist Financing (NRA), asserted that ‘Countering terrorist finance forms a key part of the UK’s CONTEST counter-terrorism strategy’.

In other words, the UK has done little, despite its claims, to have tackled real money laundering, tax evasion and terror financing because the City of London, the banks that reside within its boundaries and tax haven jurisdictions are used for precisely that reason.

Planned government spending cuts will see thousands of police jobs being lost, leaving the public protected by the lowest numbers of officers since the 1970s, according to a private estimate circulating among police chiefs. In the meantime, government expenditure on counter terrorism has increased £500m and the NCA’s budget is protected.

According to the Crime and Policing Update (Nov 2015) “Cyber security will be enhanced with the creation of a new national cyber centre to make Britain the best protected country in cyber space. Government spending on cyber security will reach £1.9 billion a year by 2020, whilst MI5, MI6 and GCHQ will receive a further 1,900 extra security and intelligence staff.” The ‘Snoopers Charter’ and increased powers for MI5, MI6 and GCHQ, enshrines new capabilities in legislation which has taken years to get through.

All that additional expenditure, surveillance and cyber security and, as Rolling Stone put it when HSBC were caught laundering billions for drug cartels: “The banks’ laundering transactions were so brazen that the NSA probably could have spotted them from space. Breuer admitted that drug dealers would sometimes come to HSBC’s Mexican branches and “deposit hundreds of thousands of dollars in cash, in a single day, into a single account, using boxes designed to fit the precise dimensions of the teller windows and washed their cash through one of Britain’s most storied financial institutions.”

And yet, clamping down on the City of London, the real pumping heart of global terrorism and crime seems out of the question. Both David Cameron and George Osborne seem so concerned about the artificial health of the City of London that special meetings were conducted to demand cast-iron legal protections for it as part of reforms to prevent the UK leaving the EU. All this whilst, to use a headline from The Independent, “Tory MPs brand David Cameron’s EU deal ‘thin gruel’, ‘watered down’ and full of broken promises” – but not for money laundering ops in The City, obviously.