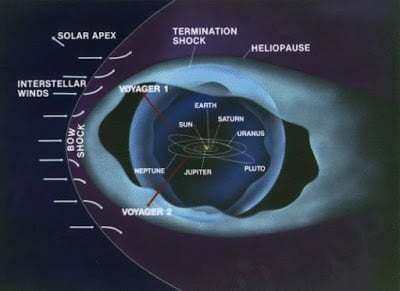 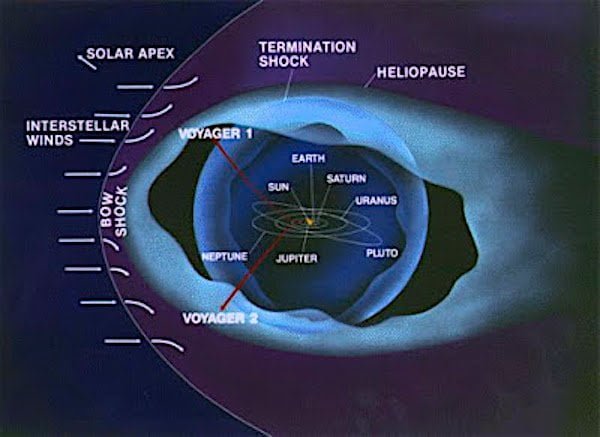 Clearing of the Chimera group continues. The Light forces have begun to dismantle the so-called Chimera barrier. Chimera barrier location coincides with the termination shock of the heliosphere in the outer edge of our Solar System:

Chimera barrier is the outer defense line of the Chimera group and consists of a fleet of motherships, connected to plasma toplet bombs. Its purpose is to prevent positive interstellar and galactic energies penetrating our Solar System. It is located just inside the outer barrier (as called by Corey Goode) / Tachyon membrane (as called by some other sources). Outer barrier /Tachyon membrane’s location coincides with the heliopause in the outermost edge of our Solar System and is used by the Light forces to direct flow of beings and energies in and out of our Solar System.

Dismantling of the Chimera barrier has been detected by Voyager 2 spacecraft:

Dismantling of the Chimera barrier has begun opening our Solar system and consequently also the consciousness of humanity to positive energies of the interstellar space. There is a group, called Breakthrough Initiatives (!) that plans to send a bevy of miniature space probes to Alpha Centauri:

Please disregard the presence of Cabal’s agent Mark Zuckerberg in the group, he will not be able to do much harm to the project.

Also, NASA wants to travel through the Solar System faster:

Bigelow Aerospace has just launched its expandable space habitat (BEAM). Larger version of that habitat can very shortly lead to mainstream colonization of our Solar System:

Our joint US / Japanese team has successfully planted a Cintamani stone in Antarctica:

The Pleiadians are visiting Antarctica as well:

On April 19th, Shanghai Gold Exchange will begin to implement yuan-denominated gold price. Although it is an important step towards the financial Reset, we are NOT there yet and calling it Shanghai Shock is a little bit too dramatic: