Prepare For Change
Home Event Support Groups US On Nuclear Weapons: Do As I Say Not As I Do 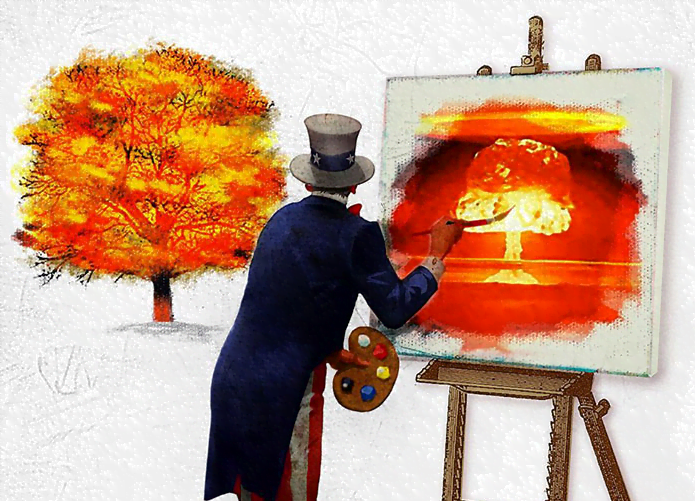 Obama recently made another call to end nuclear weapons during his speech at Hiroshima; while I’m sure the words were well-intentioned they start to lose meaning when you look at the actions our country has taken on this issue in recent times. If we really want to pursue a world without nuclear weapons we should lead by example and not just preach what other countries should do while we do it ourselves.

Obama recently said in a Washington Post op-ed that we “remain on track to meet our New Start Treaty obligations so that by 2018 the number of deployed American nuclear warheads will be at their lowest levels since the 1950s.” That sounds nice but it’s not the whole picture. Let’s keep in mind that the number of operational warheads has been steadily declining since the end of the Cold War in the late ’80s. While this is progress, the decline is not an accurate picture of Obama-era policies in the last eight years.

The United States and Russia by far have the largest number of operational warheads. In 2015 the US had 4,571 while Russia had around 4,500. Coming in third place was France with 300. If you remember back in 2011, the New Start treaty went into effect – the US and Russia agreed to reduce their operational nuclear weapons by 50%. We can look at the data and see from 2011 to 2015 there’s only been a 6.7% reduction in the US.  The obligations of the treaty must be met by 2018 so there’s still time, but it looks unlikely.

On top of these numbers, we announced a plan to “modernize” our nuclear weapons in 2014. Basically, instead of removing out of date nuclear weapons we’ll use them to make ones that are smaller and more precise. Naturally, this means they’ll be easier to use. According to the government’s own budget projections, these weapons will likely cost one trillion dollars over the next 30 years. This budget exceeds Reagan’s in 1985, which at the time was the largest budget for nuclear weapon modernization.

Obama’s defense budget requests for 2017 show that the reasoning for this is to counter Russia’s “aggressive policies.” Hopefully I don’t have to keep going for you to see how much sense this makes – this sounds like Cold War logic all over again.

In 2013, the Pentagon issued a report saying that after our nuclear weapons are reduced by 50%, our nuclear force levels will be “more than adequate for what the United States needs to fulfill its national security objectives.” Before that, the Pentagon also concluded that Russia “would not be able to achieve a militarily significant advantage by any plausible expansion of its strategic nuclear forces, even in a cheating or breakout scenario under the New START Treaty.” So here we have the government saying internally there’s no issue, but externally telling the public in a press release we need to bulk things up to counter Russia’s aggressive policies. I’m amazed more people don’t acknowledge this but the only way you’d know is to spend hours reading internal papers and a lot of times you have to get access to them through the Freedom of Information Act. Most citizens don’t have time for that.

If the United States wants to lead by example it should be brave enough to take the first step in fulfilling our legal obligation to reduce our nuclear weapons, not “modernizing them” (aka making more precise ones) because we’re afraid of what another country might do. The amount of weapons we have now is enough to destroy the entire world seven times over, there’s no reason to have this many active nukes unless we plan on using them which would kill ourselves. Nations will keep holding onto their nuclear stockpile justifying it publicly with this fear logic until someone is brave enough to make the first step in the opposite direction. If the United States is really a “nation of laws” as many describe it, it’d be a good idea to start abiding by international laws we continuously ignore, including the NPT treaty of 1970 which was signed with the intention of moving towards complete nuclear disarmament.