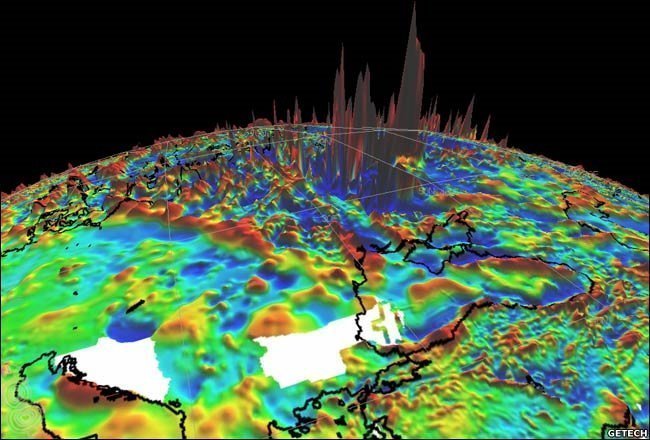 Light workers and warriors need to be aware of a major source of disharmony on our planet so they can focus healing energies there. This page provides information and healing meditation techniques to do so. Please participate in the global meditations each Thursday at 5 PM GMT and visualize healing this part of our planet.

The northern Congo correlates to the dramatic image above which shows the extreme magnetism that occupies the Congo region just north of the Goddess Vortex. Blue and red are on the opposite ends of the scale used to define this map and the spikes over the Congo show the amount of magnetic energy present there. Magnetic fields capture plasma from the sun and the energies of the Congo region combine the torsion dynamics and plasma effects to create a region of geopathic zones and vortices dangerous to humans. Assuming that the vortex is both magnetic and torsion field derived, it is a major concentrator of plasma on Earth and it is necessary to address both the geo-pathic vortices and the plasma entity called Yaldabaoth

This important geopathic vortex zone needs to be cleared and turned to the light. Its position adjacent to the Earth’s primary Goddess Vortex over central Congo has allowed it to host entities intent on inhibiting the Goddess Vortex in its important mission to connecting the planet to the positive energies of the Universe.

This article is to show light workers the need to do this and align the planetary consciousness to accomplish this. We need to use all our power to make this happen, it is that important. There can be little disputing that there is currently a dark energy there, the city at its center, Bangui, has been called the most dangerous city on earth.

Moreover, the planetary flow of carbon monoxide, (left) a deadly gas converges each year in January to form a dense cloud over the region. It does not do this anywhere else in the world. The geopathic vortex there needs healing.

The Earth’s energetic currents or ley-lines, distribute torsion field energy around the planet, forming vortices where they cross or converge. Among the energies encountered by these lines are magnetic anomalies, which are then incorporated into the nature of the local energetic environment. The largest magnetic anomaly on the planet is located on the border of the Central African Republic and the Democratic Republic of the Congo, centered on the capital of the CAR, Bangui. It is on the banks of the Ubangi River, a perfect conduit for the torsion field energies, which flows over and through the region now defined as the Bangui Magnetic Anomaly.

The above computer illustration of the magnetic fields on the surface of Africa show the extreme nature of the Bangui Magnetic Anomaly. From additional graphics based on satellite measurements we can tell that these field lines are surging out of the middle and returning on both sides with a defined north pole angled to the east. Bangui, the capital of the Republic of Central Africa, is on the border with the Democratic Republic of the Congo. As quoted below, Bangui is at the center of the anomaly, meaning that it stretches hundreds of kilometers into the Congo as well.

“The anomaly, about 1,000 kilometers in diameter and centered on the capital of the Central African Republic, was discovered in the middle of the last century. One hypothesis suggests that due to an intrusion of magnetic material of the Earth’s mantle into the crust, but geophysicist at NASA Patrick Taylor and his colleagues believe it could be the product of the impact of a giant asteroid more than 1,000 million years ago. Unfortunately, the country’s insecurity makes it difficult to study the phenomenon.”

On the right is another computer graphic based on satellite data, which show the Bangui Magnetic anomaly paralleled by low magnetism stripes. From the data it is not clear if these blue zones are the return of the magnetic lines of force coming out of the red center stripe. The difference from normal of the anomaly is very great and seems to be related to  an ancient asteroid strike, probably an iron-based body that is now melting at the bottom of the lithosphere and interacting with the flowing asthenosphere,  creating the magnetic effects on the surface. The anomaly has a north magnetic pole defined at the east end. 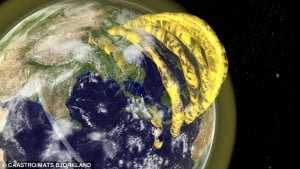 Magnetic fields attract and hold plasma discharged from the Sun, as shown by the discovery of tubular plasma bodies occurring around the Earth’s magnetic field lines. Although the Bangui Magnetic Anomaly is located on the equator, we can assume that the planet’s magnetic field lines combine with it to transport plasma into the one thousand kilometer wide anomaly.

In June 2015 an Australian student found that plasma was being trapped in the Earth’s magnetic field lines and further, they were modeled with the Murchison Widefield Array to show their  size and shape above the planet. The graphic to the left was created by an artist to illustrate the plasma tubes, but remember that they are associated with the magnetic field lines that loop out and back surrounding the planet.(see graphic on left)

Cobra has written about a plasma entity who surrounds the Earth and depends on the existence of the plasma captured by the magnetic field lines and other magnetic anomalies as well. In his April/May Interview, he said:

We do this meditation each Thursday at 5pm GMT. (Date above cannot be changed anymore) as also any time you are guided to.

We can help the Light forces in healing the plasma entity called Yaldabaoth by ancient gnostics, which is according to Cobra the main reason which prevents the Event to happen.

This plasma entity is sustained through plasma accretion vortex which accumulates all cosmic anomaly compressing it within plasma energy field around the planet Earth. It is called also octopus and his tentacles reach throughout the entire Solar system and is tied to the toplet bombs. It is maintained by the plasma implants, which every human carries in his energy body.

This anomalous plasma structure is feed by all negativity happening on the planet and by all negative archon’s technology and is actually preventing the Light to come through.

There are simple techniques we can do to heal Yaldabaoth.

The spiral of the goddess vortex is actually the torus… I will not go into much technicality right here because this will need much more time. But basically it is natural form which heals the space/time anomaly. It is the correction mechanism for the anomaly. It corrects it and aligns it with source. It is the basic principle to which all the plasma and anomaly and all other anomaly is being healed throughout the universe, especially on this planet because it is the focal point for different dimensions as much awareness of goddess principle as possible needs to be here. This is the main reason why this was suppressed because it is the key to heal the anomaly on the planetary scale and on the cosmic scale. (Cobra April/May interview)

The Goddess Vortex over the Congo 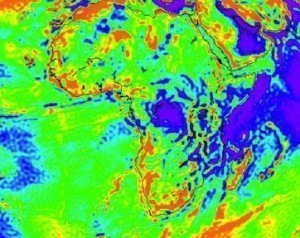 South of the Bangui Magnetic Anomaly is the Congo Goddess Vortex, which is anchored by a circular mass beneath the jungles of the Congo. The gravity is uniform there and due to its density serves as torsion field attractor for the major gravitational forces of the solar system, providing  a stable connection for the dynamic forces of the orbiting moon and other bodies as they participate in the tidal forces affecting our planet. You can clearly see the increased thickness of the mantle as a purple color within the region of the Congo in the graphic on the right.

The circular shape of the mass reinforces the the ability of the region to support the Goddess Vortex, as it resonates with the movement of the planet and the motion of the moon and planets.

We have learned that distortions of the Earth’s energy field create disharmonious or geopathic zones where sickness is created because the biological forms are disrupted by the incoherence of the field. Negative entities are attracted to these areas and the presence of the Bangui Magnetic Anomaly to the north has created an unsavory neighbor for the Goddess Vortex over the center of the Congo.

Light workers need to use this information to assist in the healing of Africa. Focusing the love energy of thousands of lighted beings can have a great effect on this region. Above is the Healing meditation for the plasma entity occupying the Bangui Magnetic Anomaly, known as Yaldabaoth and below is the healing and clearing mediation for the Goddess Vortex over the Congo from Cobra.

Goddess Vortex is the ultimate technology of the Light forces which will finally dissolve the Matrix on the astral and etheric planes around our planet.

Goddess Vortex is a rainbow spiral of energy which encompasses all possible combinations of Light. It is a presence of an angelic being which transmutes all darkness into pure Light through an eight-dimensional stargate of the Antarion Conversion. It is a vortex of the presence of One which absorbs all anomaly of duality and ascends it into the One through the process of micro-triangulation. 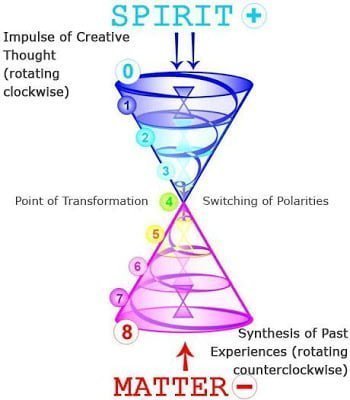 All Goddess Vortices create a network of Light on the etheric and astral planes which produces a morphogenetic field of Oneness that serves as an instrument of divine intervention on this planet. This network of Light will ultimately transmute all darkness on the astral and etheric plane and remove all negative entities  until the last reptilian is gone forever and all non-physical planes around Earth will become realms of Light. This will set the right conditions for the Event.
Goddess Vortex is an Angelic Presence that goes through our bodies and anchors into the physical plane. You will be able to feel that Goddess Vortex in your body. Archons are allergic to Goddess energy. This is why the Catholic Church was suppressing women. The non-physical Archons are very allergic to this. Every time any woman or man channels that Goddess Vortex, thousands of reptilians are removed forever.
Here are the instructions to anchor the Goddess Vortex:
You can activate the Goddess Vortex anytime you feel guided to do so and this will strengthen the planetary network of Light and accelerate the purification process of the non-physical planes that will ultimately lead to the Event.

10 thoughts on “Healing the Congo: Yaldabaoth, the Bangui Magnetic Anomaly and the Goddess Vortex”