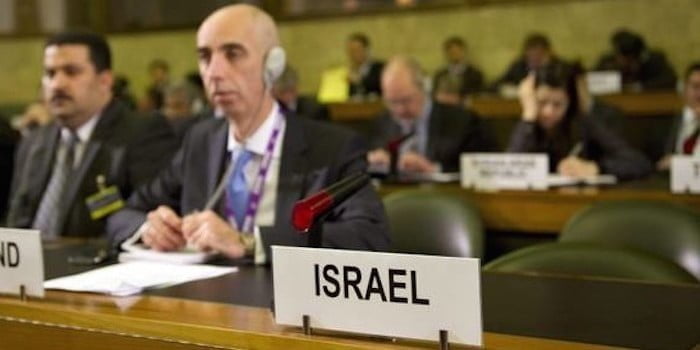 The U.N. Human Rights Council wrapped up its latest session in Geneva on Friday, March 27 by adopting four resolutions condemning Israel.  That’s four times more than any of the other 192 UN member states.

There were four resolutions on Israel. And one on North Korea — a country that is home to government policies of torture, starvation, enslavement, rape, disappearances, and murder – to name just some of its crimes against humanity.

Four resolutions on Israel. And one on Syria. Where the death toll of four years of war is 100,000 civilians, ten million people are displaced, and barrel bombs containing chemical agents like chlorine gas are back in action.

Four resolutions on Israel. And one on Iran. Where there is no rule of law, no free elections, no freedom of speech, corruption is endemic, protestors are jailed and tortured, religious minorities are persecuted, and pedophilia is state-run.  At last count, in 2012 Iranian courts ordered more than 30,000 girls ages 14 and under to be “married.”

And what did that one resolution on Iran say? Co-sponsored by the United States, it was labelled a “short procedural text,” consisting of just three operative paragraphs that contained not a single condemnation of Iran.

The Israel resolutions, on the other hand, were full of “demands,” “condemns,” “expresses grave concern,” and “deplores” – along with orders to “cease immediately” a long list of alleged human rights violations.

Ninety percent of states – inhabited by 6.6 billion people – got no mention at all. Countries like China, Qatar, Russia, and Saudi Arabia.  For the UN, there was not one human rights violation worthy of mention by any of these human rights horror shows.

Why not? For starters, China, Qatar, Russia and Saudi Arabia are all members of the UN Human Rights Council. Actually protecting human rights is not a condition of being elected to the Council, and thereby transforming into a UN authority on what counts as a human rights violation.

Thus at this session, “death to America” Iran sponsored a Council resolution called “Enhancement of international cooperation in the field of human rights.” It was adopted by consensus – with U.S. blessing.

The Palestinians – whose unity government includes the terrorist group Hamas – co-sponsored the resolution “effects of terrorism on the enjoyment of human rights.”

The Organization of Islamic Cooperation – representing states where converting to Christianity is subject to the death penalty – sponsored a resolution called “combating intolerance of persons based on religion or belief.”

Playing at caring about human rights is the U.N. game. And no state does it better than Iran.

Iran’s human rights record happened to come up at the March session in the context of what the Council calls a “universal periodic review” (UPR). Touted as its leading human rights innovation, the same process is applied to every state every four years.

That means Iran and Syria get treated the same way as, say, the United States and Canada.  At the end of the UPR, a report is summarily adopted containing a bunch of recommendations that the former cast of characters summarily dismiss.

It was suggested to Iran, for instance, that it stop peddling little girls as sex slaves for old men. The recommendation received this reply:  “in light of Islamic teachings, a person that has reached the age of maturity and is of sound mind has the possibility of marrying.”

The Council created a human rights investigator on Iran, but Iran has never let him into the country.  Recommendations made to Iran during the UPR that it cooperate, were simply ignored.

On March 19, 2014, the U.S. representative mustered all her courage and countered with this: “we note with disappointment that Iran has not addressed the issue of allowing the Special Rapporteur on the situation of human rights in Iran to visit the country…”

There is an alternative conclusion. We note with disappointment that the United States legitimizes this travesty and empowers the real enemies of human rights.