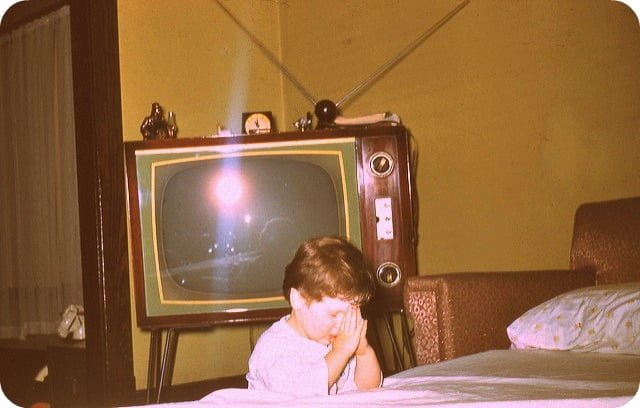 “Having grown up a bit, I see how television has changed America completely. We stay inside now and at look at screens, instead of walking under the sun and absorbing vitamin D…”

When I was a child, I watched a lot of MTV. Before I even knew who the real Madonna was, I was watching the fake Madonna sing “Like a virgin” in her video. I can’t even tell you how much time I wasted inside, absorbing contrived nonsense. But I didn’t know any better. It was simply a given that this was how people lived.

Having grown up a bit, I see how television has changed America completely. We stay inside now and at look at screens, instead of walking under the sun and absorbing vitamin D; talking to our neighbors; exploring the outside world; or building and creating things. In other words, we’re not doing the things that sustain our health and are natural to us! That’s progress, for sure. (Laughs sarcastically.)

We are social creatures, so the introverted nature of television watching doesn’t fit our make up. Instead of fraternizing with real human beings, we socialize with fictional characters like Gilligan, Andy Griffith, and Jack Tripper in reruns that exist in perpetuity. We learn from experience, so the downloads we’re getting are retarding our ability to learn properly, except from digital sources.

The passive nature of viewing cannot possibly help us build society, or rebuild it as the case may be. We watch with anxiety as things crumble around us, tuning in for more updates being the thing to do as an American to “participate” in the drama.The news networks keep Americans in a constant state of fear…

The reality shows teach mindless frivolity and the history shows do strange things like speculate on alien involvement, but they don’t teach history…

So to recap, the television provides constant fear, conditions people to act like stock characters, and masquerades as an educational tool, but instead spews forth nonsense.

Minus a few worthy shows, television is an awful waste of time. Your expanded cable package may give you a hundred channels, but there’s nothing to watch. People are always complaining about this, and still the television’s always on! I’m here to tell you, there never was anything on and there never will be, because the purpose of television is not to entertain, but to control and influence.

And to sell things, of course. Including a whole new lifestyle based on the use of chemicals and frozen foods placed in boxes, which is a good metaphor for the entire “culture” television has instilled in Americans. The culture!

Think, supposedly the hippie and flower child movements were counter­cultural, but they were brought to us by the television. Millennials may think that it was all organic, but it started on American Bandstand and Ed Sullivan, and overnight went viral. So it was desired by the establishment, which is something people have a hard time understanding.

People imitate what they see on television. If products are sold, they will buy the products. If news is proffered, they’ll believe the news. If culture cues are issued, they’ll take the cue and become what’s “predicted”. Fans of the Beatles were initially paid to scream. Hysteria is contagious.

Nothing good can come from watching television. I recommend getting all your friends together and dialoguing in order to reverse the trend of isolation this box has brought about. If Americans begin to turn off the digital restrainer and engage themselves in personal encounters with real human people again, this would be a huge blow to the globalist culture creators.

Life was not meant to be lived through a screen. Technology has imprisoned many of us, and I think it necessary to reevaluate the idea that it will lead to open ended progress.

I look forward to the day when humanity wakes up and simply refuses to be guided this way anymore. Perhaps this time, instead of revolting, it will just shrug its shoulders and wisely change course, a creature come of age at last.

Also see: How TV Affects Your Brain Chemistry For The Worst

Photo credit: gregarch2 via VisualHunt.com / CC BY, modified by Editor

The article (Confessions of a Child Raised by the Television) is an original piece produced for Natural Blaze by Chris Veritas. It can be republished with attribution in part or in full under a share-alike non-commercial Creative Commons with no content modifications, keeping internal links and bio intact. Get your free eBook on Apple Cider Vinegar!