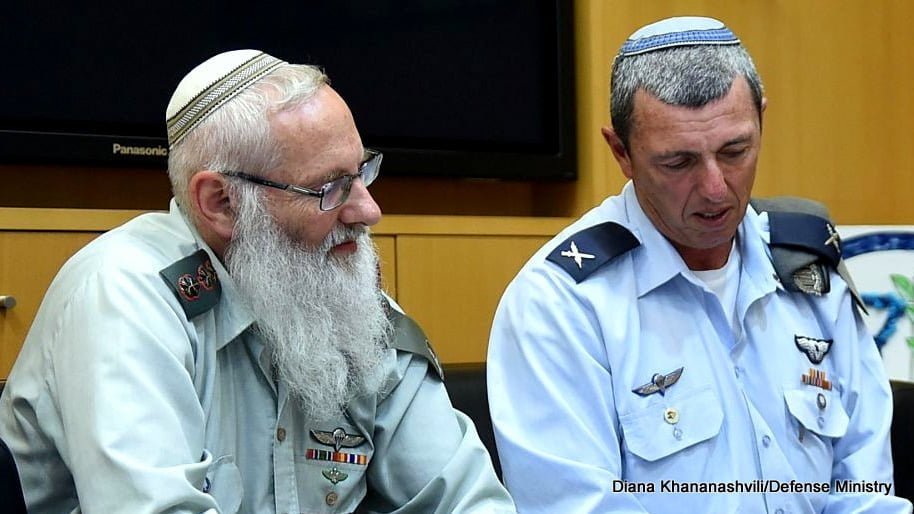 Outgoing chief rabbi, Brig. Gen. Rafi Peretz, of the Israeili Defense Forces, who is stepping down after six years in the position is being replaced. And, his successor, Rabbi Col. Eyal Karim’s appointment is being met with backlash — as he is outspoken for allowing soldiers to rape women during wartime.

Karim, who was announced on Monday as the intended new IDF chief rabbi, has provoked controversy with previous misogynistic statements, such as opposing female conscription and implying that rape was permissible in times of war.

According to Ynet News, Karim has been serving as the head of the Rabbinate Department in the Military Rabbinate. He is an alumnus of the Bnei Akiva Nachalim and the Ateret Cohanim yeshivas, and he served previously as a combat paratrooper, eventually commanding their elite reconnaissance unit, before taking a break from the military and eventually returning to its rabbinate.

In 2012, Karim’s controversy started when the Hebrew religious website KIPA, asked him, in the light of certain biblical passages, if IDF soldiers were permitted to commit rape during wartime despite the general understanding that such an act is widely considered repugnant.

His answer enraged many Israelis.

“Although intercourse with a female gentile is very grave, it was permitted during wartime (under the conditions it stipulated) out of consideration for the soldiers’ difficulties,” he wrote. “And since our concern is the success of the collective in the war, the Torah permitted [soldiers] to satisfy the evil urge under the conditions it stipulated for the sake of the collective’s success.”

In other words, soldiers can rape innocent women during times of war in order to keep their morale up.

The head of the Knesset Committee on the Status of Women and Gender Equality, MK Aida Touma-Sliman (Joint Arab List), said, “Col. Karim’s ruling on permitting raping non-Jewish women is similar to the fatwa of a murderous organization that’s not so far from Israel’s borders. I will contact the attorney general and oppose the appointment, and I call on female and male members of Knesset to join my request.”

The chairperson of Na’amat —Movement of Working Women & Volunteers, Galia Wolloch, said, “Anyone who thinks that rape is okay as a morale-booster for soldiers, so long as it’s of gentile women, cannot lead the army to good moral and spiritual places.”

When he is not advocating for the rape of women, Karim is outspoken about refusing to allow women in the IDF.

Karim wrote in 2002 that it was explicitly forbidden.

“In a situation such as the one during the War of Independence, in which there was a real pikuah nefesh[matter of life or death] of the Jewish people, women also participated in the defense of the nation and country, even though the situation was not so modest,” he wrote. “But in our era, we do not live with a real threat to our survival.

“And because of the liable damage to the modesty of the girl and the nation, the great rabbis and the Chief Rabbinate have ruled that the enlistment of girls to the IDF is entirely forbidden.”

Karim is also outspoken about women singing at military events. If a woman sings at an event, he claims, men should not have to attend as it is repugnant.

According to the Times of Israel, the IDF on Monday responded to allegations against Karim, saying the colonel “wishes to clarify that his words were only uttered in response to a theoretical hermeneutical question, certainly not to a practical halachic question.

“Rabbi Karim never wrote, said, or even thought that an IDF soldier is permitted to sexually harm a woman during wartime,” the IDF Spokesperson’s Unit added in a statement.

Except that he did — as evidenced by the above quote.

Meretz party leader Zehava Galon said that Karim is not “suitable to be the rabbinic authority of the army, in which tens of thousands of women serve, and is not suitable to represent Jewish morality in any form.” She also condemned “his frightening, racist, and inflammatory statement” regarding wartime rape.

Yesh Atid leader Yair Lapid urged Karim to disavow his remarks about women’s enlistment, saying, according to the Times of Israel, that without a public statement to that effect “he cannot be the military chief rabbi.”

“Regarding the reports that he said that beautiful gentile women can be raped during wartime, it appears this is not his opinion,” Lapid continued. “But if he thinks this, not only may he not be the chief military rabbi, he can’t even be a rabbi.”