MINNEAPOLIS — Despite a number of high-profile attacks that have resulted in the deaths of thousands of Americans both in the United States and abroad, police continue to pose a far deadlier and more immediate threat to Americans than terrorists.

At least 8,882 civilians have been killed by police since 9/11. This figure is based on government data and civilian- and media-run databases of police killings, although experts agree that the true number could be far higher. By contrast, the Sept. 11, 2001 terrorist attacks, still the deadliest act of terrorism committed on U.S. soil, claimed the lives of 2,996 people and injured over 6,000 others.

Even including the “Global War on Terror,” in which about 6,879 U.S. servicemembers were killed in the wars in Iraq and Afghanistan which were a direct result of 9/11, and more recent terrorist attacks like the San Bernardino shooting (14 deaths), the Orlando nightclub shooting (49 deaths), or even Thursday’s attack on Dallas police officers protecting a Black Lives Matter march (five deaths), those who receive public funds to “protect and serve” are proving to be deadlier than terrorists.

In 2012, Jim Harper, a senior fellow at the Cato Institute, a Libertarian think tank, tweeted a shocking figure, suggesting U.S. residents were eight times more likely to be killed by police than terrorists:

You’re eight times more likely to be killed by a police officer than a terrorist. http://bit.ly/O8dR14

More recent Department of Justice figures, as well as civilian and media estimates of police violence, suggest the problem is far worse than experts previously believed. Unfortunately, because police violence is poorly tracked by various government agencies, including those at the federal level, the true death toll may be impossible to tally accurately.

‘A math puzzle with real consequences’

The FBI tracks “justifiable homicides” by law enforcement, but despite what the Guardian’s Jon Swainedeemed last year to be a long-running “debate about why the American government has failed so badly to monitor this issue of national importance,” police departments are not required to report details of deaths at the hands of officers to the Bureau.

By contrast, police methodically report their own deaths to the government, and statistics suggest policing became safer than ever during President Barack Obama’s eight years in office, even as protests against police violence increased.

Other government agencies’ attempts to track the problem have yielded mixed results. Previous Justice Department figures suggested about 500 people a year were killed by police, but in March 2015, the Bureau of Justice Statistics, part of the DOJ, issued a new report on “arrest-related deaths.”

Based on an analysis by FiveThirtyEight, a site known for statistical analysis of the news, the BJS report suggests that about 930 people are killed by police each year. And even that figure is likely too low, according to Carl Bialik, FiveThirtyEight’s lead news writer.

“It’s even higher — about 1,240 — if you assume that local law enforcement agencies that don’t report any killings have killed people at the same rate as agencies that do,” Bialik wrote on March 6, 2015.

“This is a math puzzle with real consequences,” Bialik urged. “Solving it would get researchers closer to understanding how many lives have been lost — and how many victims we’re not yet counting.”

Additionally, because the government’s figures rely on voluntary police reporting, they also reflect the bias of police departments, which tend to blame civilians for their own deaths almost regardless of the circumstances. The Washington Post’s Radley Balko noted on Twitter on Monday:

So Lori Jean Ellis would counted as “fired at police with a gun.” Even though she didn’t. https://www.washingtonpost.com/news/the-watch/wp/2016/05/06/south-carolinas-poisonous-police-culture-the-death-of-lori-jean-ellis/ …

In 2014, Kershaw County settled a lawsuit over a police shooting for $2 million. Yet no one seems interested in finding out what actually happened.

To make up for the lack of accurate government data, civilian and media-backed efforts have emerged to track deaths caused by police. Killed By Police, a volunteer effort based on news reports, began in May 2013, whileThe Counted, a similar database maintained by The Guardian newspaper, and The Washington Post’s Pulitzer Prize-winning Fatal Force project, which documents only fatal police shootings, began tracking deaths last year.

To calculate the number of civilians killed by police since 9/11, MintPress News began with an article published on our website written by Katie Rucke, who estimated that between 500 and 1,000 people had been killed by police each year from Sept. 11, 2001 and November 2013. Although she reported that 5,000 people were killed by police in that 12-year period, we realized that, even at 500 people killed per year, the total should not be 5,000, but 6,000. For 2014, we added the 1,111 police-related deaths recorded in the Killed By Police database, the first full year tracked by that site, and the year in which USA Today reported a disturbing spike in fatal encounters with police. For 2015 and the year to date, we averaged the data compiled by Killed By Police and The Counted, to determine that about 1,177 people died at the hands of police in 2015, and that 594 people have met the same fate so far this year.

By adding these figures to Rucke’s calculations, we arrived at a total of at least 8,882 people killed by police since 9/11. Although we used Fatal Force for background research, we disregarded its more focused database in our calculations. But by the nature of the differing available data sets, and without mandatory police reporting, the figures we arrived at and any similar calculations by other media outlets will always remain the product of educated guessing based largely on media reports. 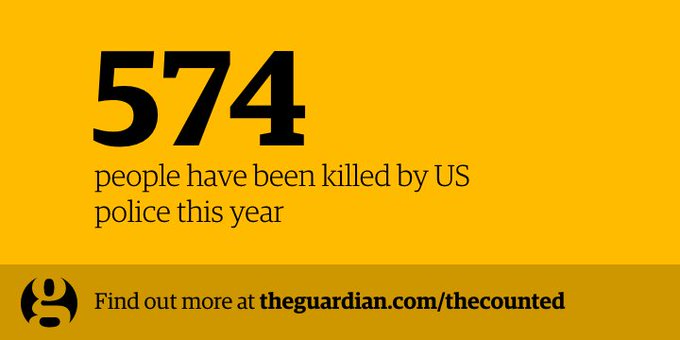 Accusations of racial bias in policing in general, and killings by police specifically, have given rise to movements like Black Lives Matter. Although the majority of those killed by police are white, “data scientists and policing experts often note, comparing how many or how often white people are killed by police to how many or how often black people are killed by the police is statistically dubious unless you first adjust for population,” wrote The Washington Post’s Wesley Lowery on Monday. According to the Counted, after adjusting for their total percentage of the populations, police kill blacks and Native Americans at about twice the rate of whites.

‘Police are not a permanent fixture of society’

The epidemic of police violence in the U.S. has left many searching for reforms or even alternatives to police.

In August 2015, Black Lives Matter activists launched Campaign Zero, a ten-point plan to reduce police violence through concrete reforms such as mandatory body cameras, better community oversight of police (including increased transparency around police violence), and a reduction of police militarization. Since July 7, visitors to the Campaign Zero website can also track police reform legislation in state legislatures and Congress.

Some departments are voluntarily embracing some of these reforms, among them the Dallas Police Department, whose officers were among the victims of the deadly July 7 attack by gunman Micah Johnson.Leon Neyfakh, a Slate staff writer, noted several of these reforms in a July 8 report:

“Among the changes the Dallas police have made since 2012: a new foot chase policy aimed at discouraging officers from making risky decisions while pursuing suspects, new guidelines for reporting encounters involving the use of force, and a policy of bringing in the FBI Civil Rights Division to review all police-involved shootings. Since 2014, the department has maintained one website containing a trove of data on more than a decade of police-involved shootings in the city, and another that catalogues all police encounters that result in an officer drawing a weapon, using a baton, or physically restraining a suspect.

Neyfakh added that Dallas received $3.7 million in funding for body cameras in 2015, and officers havereceived increased use of force training since 2014.

But some activists and analysts believe the institution of policing is so broken and inherently biased that it can only be reformed by being completely dismantled and replaced.

“[P]olice are not a permanent fixture in society,” wrote José Martín in December 2014 for Rolling Stone. His article suggests six alternatives to policing, from community patrols to mediation, often referred to asrestorative justice, as well as more systemic solutions like the decriminalization of most nonviolent, victimless crimes and improved mental health care.

“While law enforcers have existed in one form or another for centuries, the modern police have their roots in the relatively recent rise of modern property relations 200 years ago, and the ‘disorderly conduct’ of the urban poor,” Martín noted.

“Like every structure we’ve known all our lives, it seems that the policing paradigm is inescapable and everlasting, and the only thing keeping us from the precipice of a dystopic Wild West scenario. It’s not.”

This Article First Appeared on: http://www.mintpressnews.com/