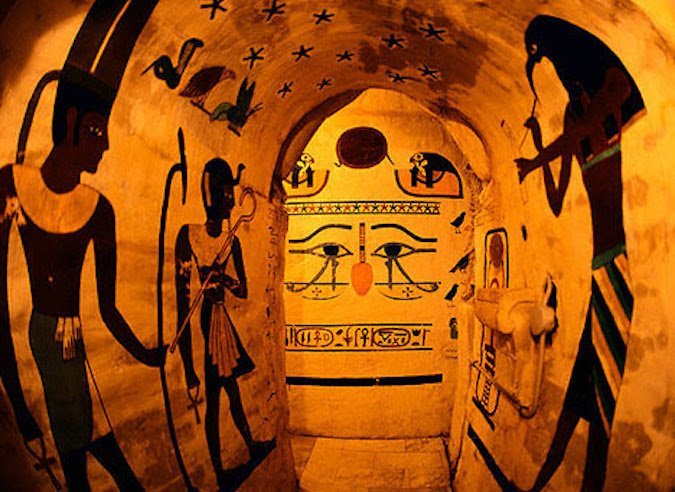 Hall of the Earth: An amazing room built on the ‘supernatural’ visions of its creator Falco

Eighth wonder of the world? The stunning temples secretly carved out below ground by ‘paranormal’ eccentric

Damanhur’s spectacular Temples of Humankind have been called the eighth wonder of the world, yet most people have never heard of these temples or even of the new paradigm community of Damanhur, nestled in foothills of the Italian Alps. Even fewer know that Damanhur’s visionary founder Falco, who founded the community in the late 1970s, transitioned after a three-month journey with cancer on June 23, 2013.

I personally spent three memorable days in this amazing community early this month and was deeply impressed not only with the astounding beauty of these inspiring underground temples, but also with the dedication and vibrance of the many community members I met.

Their philosophy based on continual transformation of both the individual and all of humanity towards ever greater love and interconnectedness deeply resonated with me. This is one of the most impressive of the countless groups I’ve learned about working to create an entirely new way of living in our world. I plan to return to spend more time interacting with these great people.

Scroll down to see the incredible beauty and vibrance of these underground Temples of Humankind and read about their secret history and construction, as reported in the UK’s popular Daily Mail. At the end of the article, you’ll find several other great resources to explore Damanhur, the Temples of Humankind, and Falco’s life and death. Enjoy this beautiful manifestation of the new paradigm we are co-creating on Earth.

With sacred love and warm wishes,
Fred Burks for PEERS and WantToKnow.info

Nestling in the foothills of the Alps in northern Italy, 30 miles from the ancient city of Turin, lies the valley of Valchiusella. Peppered with medieval villages, the hillside scenery is certainly picturesque. But it is deep underground, buried into the ancient rock, that the region’s greatest wonders are concealed.

Here, 100ft down and hidden from public view, lies an astonishing secret – one that has drawn comparisons with the fabled city of Atlantis and has been dubbed ‘the Eighth Wonder of the World’ by the Italian government.

For weaving their way underneath the hillside are nine ornate temples, on five levels, whose scale and opulence take the breath away.

Constructed like a three-dimensional book, narrating the history of humanity, they are linked by hundreds of metres of richly decorated tunnels and occupy almost 300,000 cubic feet – Big Ben is 15,000 cubic feet. 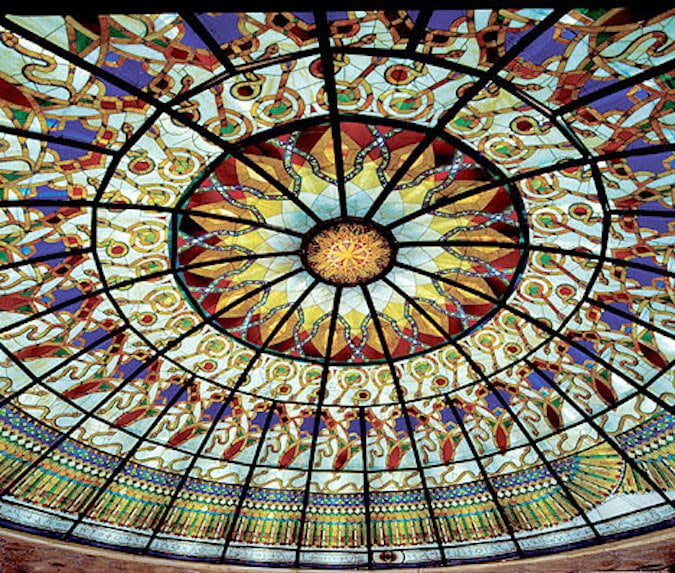 Light fantastic: The giant glass dome of the Hall of Mirrors 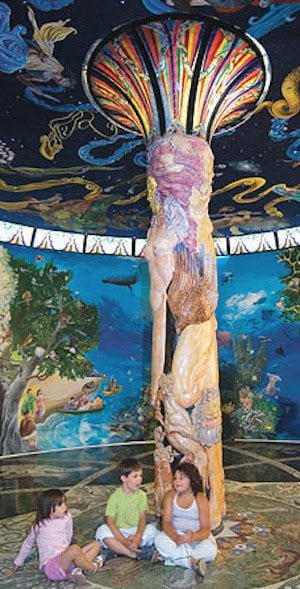 Few have been granted permission to see these marvels. Indeed, the Italian government was not even aware of their existence until a few years ago.

But the ‘Temples of Damanhur’ are not the great legacy of some long-lost civilisation, they are the work of a 57-year-old former insurance broker from northern Italy who, inspired by a childhood vision, began digging into the rock.

It all began in the early Sixties when Oberto Airaudi was aged ten. From an early age, he claims to have experienced visions of what he believed to be a past life, in which there were amazing temples. Around these he dreamed there lived a highly evolved community who enjoyed an idyllic existence in which all the people worked for the common good.

More bizarrely still, Oberto appeared to have had a supernatural ability: the gift of “remote viewing” – the ability to travel in his mind’s eye to describe in detail the contents of any building. “My goal was to recreate the temples from my visions,” he says.

Oberto – who prefers to use the name ‘Falco’ – began by digging a trial hole under his parent’s home to more fully understand the principals of excavation. 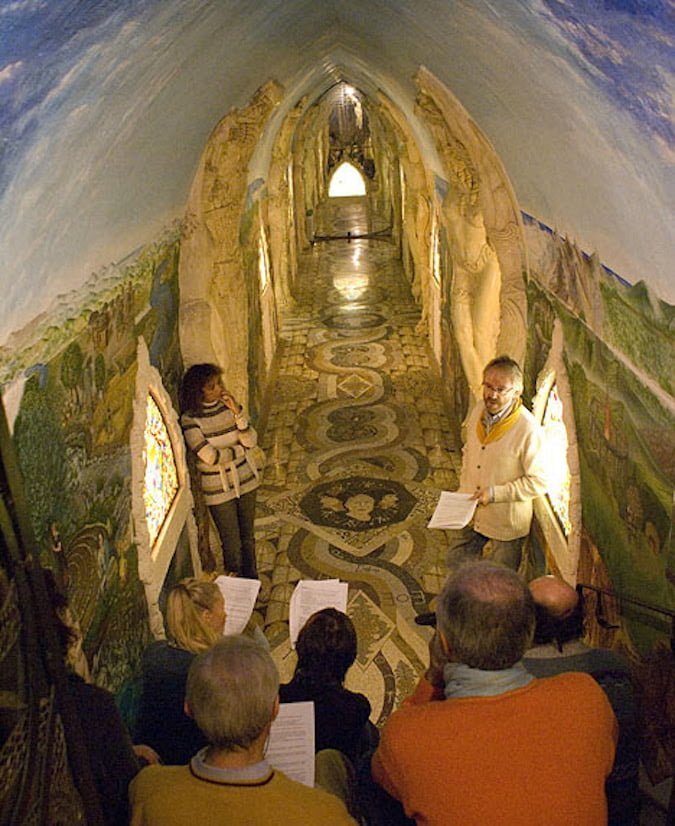 Breathtaking: The miles of tunnels enable air to circulate 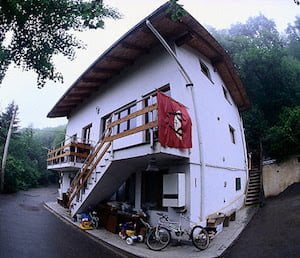 But it was only as he began a successful career as an insurance broker that he began to search for his perfect site. In 1977, he selected a remote hillside where he felt the hard rock would sustain the structures he had in mind.

A house was built on the hillside and Falco moved in with several friends who shared his vision. Using hammers and picks, they began their dig to create the temples of Damanhur – named after the ancient subterranean Egyptian temple meaning City of Light – in August 1978.

As no planning permission had been granted, they decided to share their scheme only with like-minded people. Volunteers, who flocked from around the world, worked in four-hour shifts for the next 16 years with no formal plans other than Falco’s sketches and visions, funding their scheme by setting up small businesses to serve the local community.

By 1991, several of the nine chambers were almost complete with stunning murals, mosaics, statues, secret doors and stained glass windows. But time was running out on the secret. 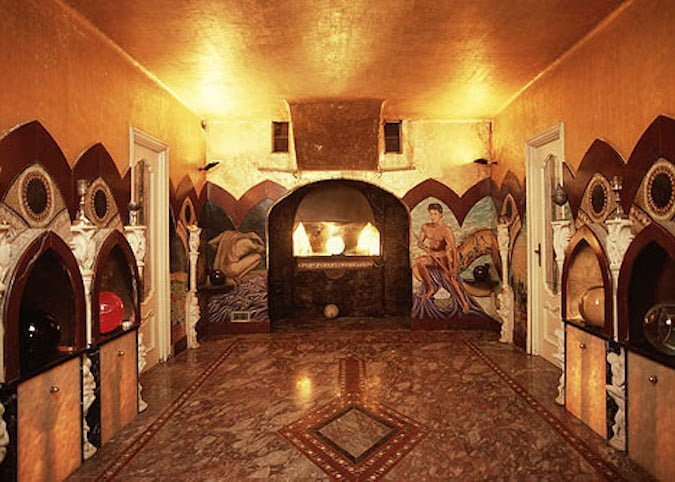 Hall of Spheres: Creator Oberto Airaudi based his creation on wonderful visions 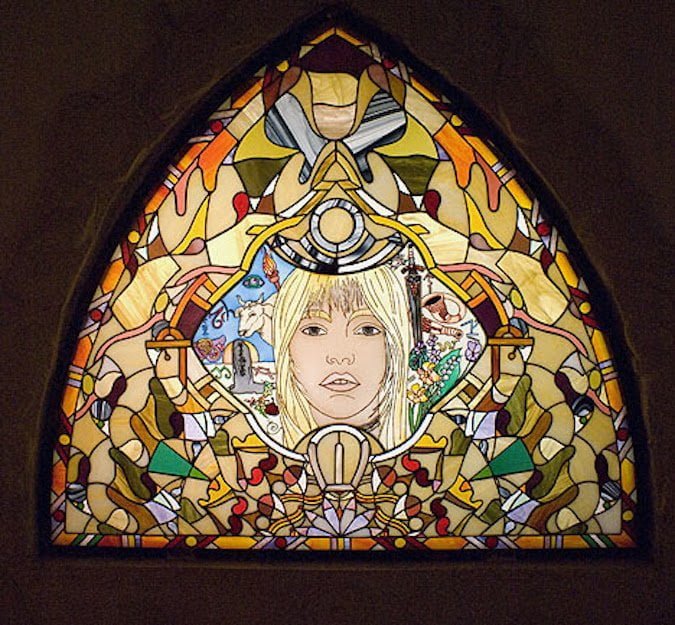 Bright window: The window decorations have a church-stained window theme

The first time the police came it was over alleged tax evasion and still the temples lay undiscovered. But a year later the police swooped on the community demanding: “Show us these temples or we will dynamite the entire hillside.”

Falco and his colleagues duly complied and opened the secret door to reveal what lay beneath. Three policemen and the public prosecutor hesitantly entered, but as they stooped down to enter the first temple – named the Hall of the Earth (see first photo above) – their jaws dropped. Inside was a circular chamber measuring 8m in diameter. A central sculpted column, depicting a three dimensional man and woman, supported a ceiling of intricately painted glass. 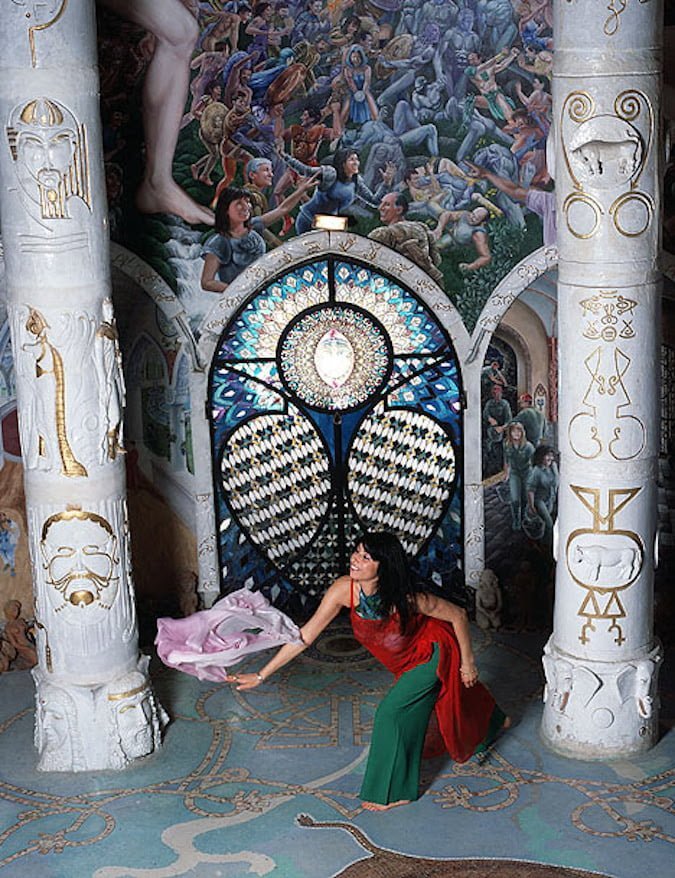 Hall of mirrors: The hall has a classical Greek feel

The astonished group walked on to find sculpted columns covered with gold leaf, more than 8m high. Stunned by what they had found, the authorities decided to seize the temples on behalf of the government.

“By the time they had seen all of the chambers, we were told to continue with the artwork, but to cease further building, as we had not been granted planning permission,” says Esperide Ananas, who has written a new book called Damanhur, Temples Of Humankind.

Retrospective permission was eventually granted and today the ‘Damanhurians’ even have their own university, schools, organic supermarkets, vineyards, farms, bakeries and award-winning eco homes.

They do not worship a spiritual leader, though their temples have become the focus for group meditation. “They are to remind people that we are all capable of much more than we realise and that hidden treasures can be found within every one of us once you know how to access them,” says Falco.

More on Damanhur: Explore the website of the Federation of Damanhur. Damanhur’s visionary Falco died of cancer on June 23, 2013. Read more on this great visionary. Then watch an awesome video tour of Damanhur and the Temples of Humankind. A most intriguing 15-minute video of experiments done at Damanhur attaching plants to synthesizers to make angelic music is also well worth your time. For other general resources of inspiration, see below.