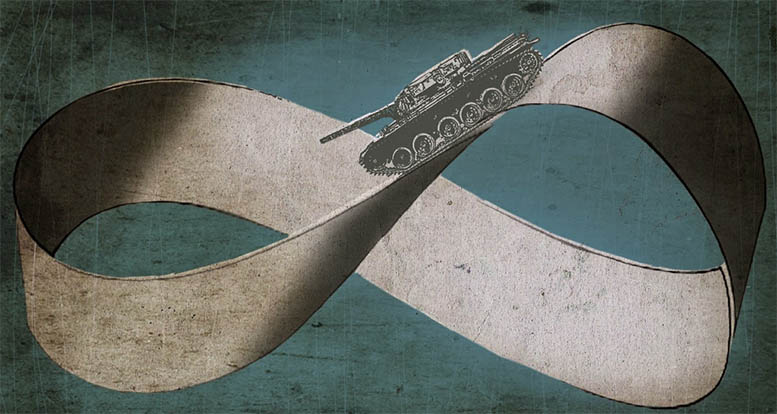 While it’s all over the mainstream media that Russia is using Iranian bases to stage attacks against ISISfor the first time — GASP! — even though A) Russia notified the U.S.-led coalition it would be doing so and B) we all know who created ISIS in the first place, establishment propaganda peddler TIMEput a spin on it that will send chills down the spines of anyone paying attention to how much we’re currently being groomed towards war with Iran.

Looks like the U.S. and its allies have a new “axis of evil” in the Middle East: Syria, Iran and Russia. The growing pro-Moscow alliance got a big boost Tuesday after Iran allowed Russia to fly its bombers from one of its bases to attack rebels in Syria.

So Russia, Syria, and Iran are officially the new “axis of evil.”

Last time phrases like that were thrown around, they were coupled with about 1,000 lies to get America into an unjustified war in Iraq that had nothing to do with the terror attacks on US soil that preceded it (or the debunked weapons of mass destruction).

Iran, you may recall, was included in the first “axis of evil,” something which actually confused a lot of press at the time:

In the aftermath of Sept. 11, relations between the United States and Iran seemed — remarkably — to be warming up, as Iran quietly offered support for the U.S. campaign in Afghanistan. In November, Secretary of State Colin Powell shook hands with the Iranian foreign minister, Kamal Kharrazi, at the U.N. headquarters in New York City — a simple yet historic gesture that seemed the most tantalizing hint of rapprochement between the U.S. and Iran since the Islamic revolution and the hostage crisis in 1979…

But on Jan. 29, 2002, in his State of the Union address, President George W. Bush branded Iran and its “terrorist allies” as part of “an axis of evil, arming to threaten the peace of the world.” And on Jan. 31, National Security Adviser Condoleezza Rice summed up the administration’s position on Iran. “Iran’s direct support of regional and global terrorism,” she said, “and its aggressive efforts to acquire weapons of mass destruction, belie any good intentions it displayed in the days after the world’s worst terrorist attacks in history.”Since this dramatic turnabout, press reports have tried to piece together the trail leading from the Powell-Kharrazi handshake to the “axis of evil” speech…

Today, it’s Russia (who is actually fighting and defeating ISIS), Syria (whose regime the Pentagon really wants to see changed already) and again, Iran (a big fat domino on the table blocking U.S. coalition-led remapping of the Middle East for a long, long time now — see Brookings’ “Which Path to Persia” for more on that).

In other words… Get ready. While everyone is busy focusing on the election, the finishing touches are being put on America’s new war.

Melissa Dykes is a writer, researcher, and analyst for The Daily Sheeple and a co-creator of Truthstream Media with Aaron Dykes, a site that offers teleprompter-free, unscripted analysis of The Matrix we find ourselves living in. Melissa also co-founded Nutritional Anarchy with Daisy Luther of The Organic Prepper, a site focused on resistance through food self-sufficiency. Wake the flock up!

This article First Appeared On: http://www.activistpost.com/