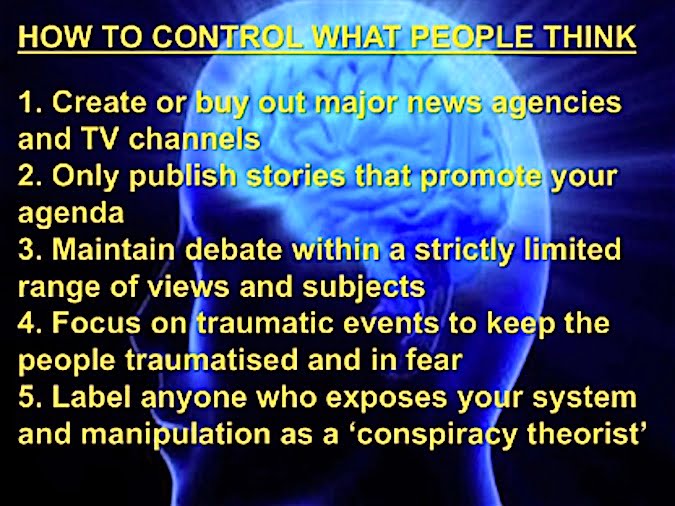 The day the masses wake up and understand what the term “conspiracy theory” really means and recognize the truth about “conspiracy theorists,” who they are, what they stand for, the world ruling [mafia] elite’s hold on humanity will be over. Their deceptive cover would have been blown wide open and indeed there will be consequences.

So, in light of the above, here are 9 indisputable truths about “conspiracy theorists.”

1. …have to put up with much ignorance, and as a knee-jerk reaction, baseless accusation of “conspiracy theory.” “Conspiracy theory” carries with it the deriding insinuation that there are no conspiracies (no conspiracy facts, just theory). Who could be so brainwashed, unquestioningly ignorant, or naïve enough to believe that no country has ever conspired??

2. Are conspiracy factualists. Using evidence they expose the truth about what’s really going on in the world. They expose the deceitful criminal perpetrator networks and authorities. Therefore, the term “conspiracy theorist” is a misnomer.

3. Give credible accounts of events, diligently challenging the official versions filled with lies, inconsistencies, fake bogeymen enemies and false paradigms … manufactured for power, profit and political gains. Many official versions of these false flag events have big enough holes in their stories to drive double-decker buses in and out of.

Then there are the eugenics, trans-humanism and depopulation agendas … these blatantly obvious conspiracy facts are there for all to see.

4. As a consequence of 3, are perceived by the ruling [mafia] elite and their associates as a threat. In order to get away with their crimes and deception they know that “conspiracy theorists” have to be ignored, invalidated, or ridiculed by the masses: [Much like the waring lawyers in a court room who deal constantly with conspiracy theories by direct evidence or circumstantial evidence].

To conspire means “to join in a secret agreement to do an unlawful or wrongful act or to use such means to accomplish a lawful end.”

The term “conspiracy theory” was originally a 1960s’ CIA invention. Over the years the ruling elite’s owned and controlled intelligence agencies such as the CIA and their mainstream media propaganda machine have used this term to expand its effect of negatively stigmatizing “conspiracy theorists” so that the masses will never realize that these people were right all along.

5. …therefore are truther messengers running the risk of getting shot. They are targeted individuals. Targeted by the likes of the UK’s ex-Prime Minister David Cameron, calling them “non-violent domestic extremists” as one of the many attempts to silence such people who have seen right through the phoney baloney.

Keep your camera on ~ on this one.

6. Are not “coincidence theorists.” How can anyone dismiss the overwhelming number of coincidences pointed out by “conspiracy theorists” to be indicators of crimes and cover-ups tied in with false flag events? Is it really a mere coincidence that it’s always the [zionist] elite few;the banksters, the puppet senior politicians, the owner/controllers of mega-corporations that benefit from these events?

7. Are the freethinking minority able to think for themselves against the backdrop: a world full of sheep-like people going into agreement with the general consensus of the masses while blindly accepting authority viewpoints blurted out in the ruling elite’s bought-off, owned and controlled mainstream media…

In 1917 Maximilian Kolbe founded the Militia of the Immaculata. His fight was not turned toward killing the enemies of the Church, but aimed to convert them so they could achieve eternal salvation.

It is in this spirit that he addressed his enemies.

In an article titled “The Poor Ones” he describes the hatred expressed for Christ and His Church in The Talmud: “Man was redeemed, and Christ founded His Church upon a rock. Some of the Hebrew people recognized Him as the Messiah, but others – among them principally the Pharisees – did not want to recognize Him. Instead, they persecuted His followers and issued numerous laws obliging the Jews to persecute the Christians. These laws, together with stories and appendixes, became their sacred book called The Talmud around the year 500 A.D.

At the time of the International Congress of Freemasonry in Bucharest in 1926, Fr. Kolbe wrote the article “Rycerz Niepokalanej” [The Knight of the Immaculate] in which one reads:

“These men [the Freemasons] believe that they are the ones who will rule everything, but let us hear what is written in the Protocols of the Learned Elders of Zion. Protocol n. 11 states: ‘We will create and put in effect the laws and the governments … in opportune moments … by means of national rebellions. … What we want is that the multitudes, disoriented by the revolt, still in a condition of terror and uncertainty, should understand once and for all that we are so strong, so untouchable, so powerful that in no way will we take into account their opinions and wishes. Instead we are ready and able to crush with irresistible power their manifestations at any moment and in every place. … Then, in fear and trembling, they will close their eyes to everything and await the consequences. …

“For what purpose have we created this policy and insinuated it into the minds of the Masons, without giving them any possibility of examining its underlying meaning? … This is what has served as the basis for our secret organization of Masonry, whose existence is not known or even suspected by these cattle, attracted by us into the army of Masonic lodges.”

Here, Fr. Kolbe directs himself to the Masons, saying, “Freemasons, did you hear this? The Hebrews, who have secretly organized and secretly direct you, consider you as beasts, recruited into the Masonic lodges for ends that you neither know nor suspect … Are you aware, Freemasons, of what awaits those among you who will begin to think for themselves? Listen to this in the same Protocol: ‘Death is the inevitable conclusion of every life … We will execute the Masons in a way that no one can suspect, not even the victims themselves: They will all die at the moment it is deemed necessary, apparently because of common illnesses.’

The saint Founder continues: “Freemasons, you who recently during the Bucharest Congress were pleased by the fact that Masonry is growing stronger everywhere, reflect well and answer sincerely: Is it not better to serve the Creator with interior peace … rather than to obey the orders of those who hate you?”

Finally, Maximilian Kolbe directs himself to the secret Chiefs of Freemasonry with these words:

“And you, small squadron of Hebrews, the ‘learned elders of Zion,’ who have already consciously provoked so many misfortunes and are preparing yet others, to you I direct this question: What advantage will you gain? … A huge accumulation of gold, pleasures, diversions and power, but none of this makes man happy. And if still it should give some happiness, how long will it last? Ten years perhaps, or twenty … I ask you, Hebrew leaders, you who have let yourselves be seduced by Satan, the enemy of humanity, would it not be better for you also to return sincerely to God?”

In another article of 1926, Fr. Kolbe, again citing the Protocols of the Elders of Zion, wrote: “They say of themselves: ‘Who or what is in a position to overthrow an invisible force? And this is precisely what our force is. Gentile Freemasonry only serves as a screen for us and our objectives, but our plan of action will always remain unknown by the people.”

The Saint then presents his position with subtle irony: “But we are an army whose ‘Commander’ knows each and every one of the enemies, who has observed and observes every one of their hidden actions, each one of their words, and even their very thoughts. Ask yourselves, under such conditions, can one speak of secret plans, clandestine actions and invisibility?”

And here Fr. Kolbe reveals the name of the “Commander” of his army: “It is the Immaculate Virgin, the refuge of sinners, but also the one who tramples the infernal Serpent. She will crush its head!”

8. Consistent with Arthur Schopenhauer’s statement, in time, with their conspiracy facts, could be the majority stage-3: “…accepted as being self-evident.”

9.   …Are who the world’s needs most: Unstoppable, increasing in numbers and gathering in momentum. They are laudable investigators.

They are peaceful activists, spreading the truth about what’s really going on in the world. Many do their inner work to co-create a turnaround, away from the planned doom and gloom. Thus, it is their intention to co-create freedom: A new paradigm experience, a world that truly makes a difference for everyone.

A shift in mass consciousness is the underlying key principle. This is how these consciously awakened individuals will bring about that freedom.

Not an attempt at an exhaustive A-Z account, I realize, but that concludes my 9 indisputable truths about “conspiracy theorists.”