Prepare For Change
Home Awakening The Percentage Of Working Age Men That Do Not Have A Job...

Why are so many men in their prime working years unemployed?  The Obama administration would have us believe that unemployment is low in this country, but that is not true at all.  In fact, one author quoted by NPR says that “it’s kind of worse than it was in the depression in 1940″.  Most Americans don’t realize this, but more men from ages 25 to 54 are “inactive” right now than was the case during the last recession.  We have millions upon millions of strong young men just sitting around doing nothing.  They aren’t employed and they aren’t considered to be looking for employment either, and so they don’t show up in the official unemployment numbers.  But they don’t have jobs, and nothing the Obama administration does can eliminate that fact.

In those days, just about any dependable, hard working American man could get hired almost immediately.  The economy was growing and the demand for labor was seemingly insatiable.

But today, one out of every six men in their prime working years does not have a job…

In a recent report, President Obama’s Council of Economic Advisers said 83 percent of men in the prime working ages of 25-54 who were not in the labor force had not worked in the previous year. So, essentially, 10 million men are missing from the workforce.

“One in six prime-age guys has no job; it’s kind of worse than it was in the depression in 1940,” says Nicholas Eberstadt, an economic and demographic researcher at American Enterprise Institute who wrote the book Men Without Work: America’s Invisible Crisis. He says these men aren’t even counted among the jobless, because they aren’t seeking work. 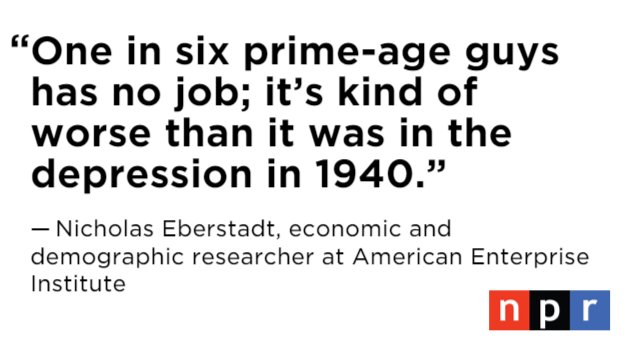 Millions of men in their prime working years have dropped out of the workforce.http://n.pr/2cjMp4N

In January 2008, right at the beginning of the last recession, it was sitting at 9.2 percent, and by the end of the recession it had risen to 10.3 percent.

Remember, these are men that don’t even count toward the official unemployment rate.  They are not working, but they are not considered to be “looking for work” either.

So what are these men doing?

You may be tempted to think that many of them have decided to stay home and raise the kids as their wives go off to work.  But according to NPR, that is not what is happening…

What the missing men aren’t doing in large numbers is staying home to take care of family. Forty percent of nonworking women are primary caregivers; that’s true of only 5 percent of men out of the workforce.

We do have the largest prison population in the entire world by far, and without a doubt that does play a role in these numbers.  However, a far bigger factor is the millions of men that have become content being dependents of the federal government.  More than 100 million Americans receive money from the government each month, and a lot of people (both men and women) have found that it is just easier to sit back and collect government checks than it is to go out and try to work hard for a living.

But of course the number one factor is the lack of jobs available.  I personally know people that have been looking for work in their fields for years and have not been able to get hired.  We have a major employment crisis in this nation, and it is only going to get worse in the years ahead as we continue to lose jobs to technology and millions more good jobs get shipped overseas.

And a lot of the “jobs” that have been created during the Obama administration have been very low quality jobs.  Since December 2014, we have gained about half a million jobs for waiters and bartenders, but meanwhile we have actually lost good paying manufacturing jobs.  If we continue down this road, the middle class will continue to shrink.

In addition to everything that I have just shared, here are some other facts that are pertinent to this discussion…

-Right at this moment, there are approximately 102 million working age Americans that do not have a job.

-Nearly one out of every five young adults are currently living with their parents.

-The Wall Street Journal recently declared that this is the weakest “economic recovery”since 1949.

-Barack Obama is on track to be the only president in U.S. history to never have a single year when the U.S. economy grew by at least 3 percent.

And if we are going to see markets crash, this time of the year is a good time for it.  In fact, CNBC says that history tells us that this is the “worst period of the year for stocks”…

The worst period of the year for stocks has just begun — at least based on market history.

Over the entire 120-year history of the Dow Jones industrial average, Sept. 6 to Oct. 29 tends to be the worst period for the market. And more specifically, the last few weeks of September have been an especially bad time.

Someday when people look back at this time in history, they will not be surprised by how horrific the coming collapse will be.  The truth is that anyone with a lick of common sense can see that the greatest debt bubble in the history of the world is going to end badly.

No, what is going to amaze them is that the system was able to hold together as long as it did.  It truly is incredible that the debt-based, fiat currency Ponzi scheme that the central banks of the world have been desperately trying to prop up has been able to keep chugging along all the way to the middle of 2016.

How much longer can they keep the magic going?

I don’t know, but history tells us that time is not on their side…

This Article First Appeared On: http://theeconomiccollapseblog.com/