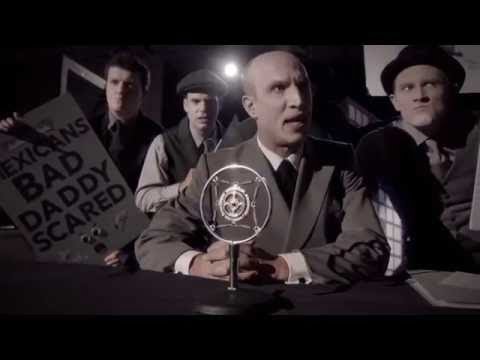 Sometimes humor is the best way to get a serious point across, as brilliantly demonstrated by Adam Ruins Everything.

On Nov. 8, in a “watershed moment,” four states legalized recreational cannabis and four more legalized medical cannabis. The jig is completely up on pot prohibition. There is nowhere for the fallacy of the drug war to hide.

The insidious motivations for criminalizing cannabis, beginning in the 1930s through Nixon’s war on drugs, are explored in the video comically and factually. From Mexican immigrants to hippies and African Americans, those who presented a challenge to the ruling class were targeted on multiple fronts.

“For most of America’s history, weed was legal. No one cared about it.”

Harry Anslinger was the original drug war crusader, using cannabis to drive funding to his Bureau of Narcotics by pushing fear about pot-smoking Mexicans.

“Marijuana is an addictive drug which produces in its users insanity, criminality and death!” proclaimed Anslinger, as government produced propaganda such as Reefer Madness. That campaign led to the first mandatory minimum, locking first-time users in a cage for 2 to 10 years.

Richard Nixon kicked the drug war into high gear, using it to target the antiwar movement and minorities – based on the same myth of cannabis causing violence which was disproved as early as the 40s.

“We knew we couldn’t make it illegal to be either against the war or black. But by getting the public to associate the hippies with the marijuana and than blacks with heroine, and then criminalizing both heavily, we could disrupt those communities. We could arrest their leaders, raid their homes, break up their meetings, and vilify them night after night on the evening news. Did we know we were lying about the drugs? Of course we did.” — Nixon aide John Ehrlickman, 1994

The devastating effects of the drug war are as true today as they ever were, with cannabis making up nearly half of drug arrests. People are still locked up for possession of a plant that people have used for thousands of years, which is far less harmful than legal drugs such as alcohol and opioid pills.

The drug war has driven mass incarceration and reaped enormous profits for prison industries, while vastly expanding State power as well as revenue through Policing for Profit. The drug war results in 1 in 8 poor children having a parent behind bars, and prevents former convicts from ever having “guaranteed equality.”

Adam does point out the potential effects cannabis can have on the developing brain, meaning under the age of 25. Early abuse can affect cognitive functions. On the myth of cannabis being a gateway drug, Adam notes, “Most people who have tried marijuana don’t even continue smoking marijuana.”

“The truth is, if you know the risks and you use it in moderation, weed is no big deal.”

The ending of the video perfectly illustrates the frightening reality – the only danger of cannabis is that cops might injure or kill you over it.