Prepare For Change
Home News Planned Obsolescence: Why the Products You Buy are Designed to Break 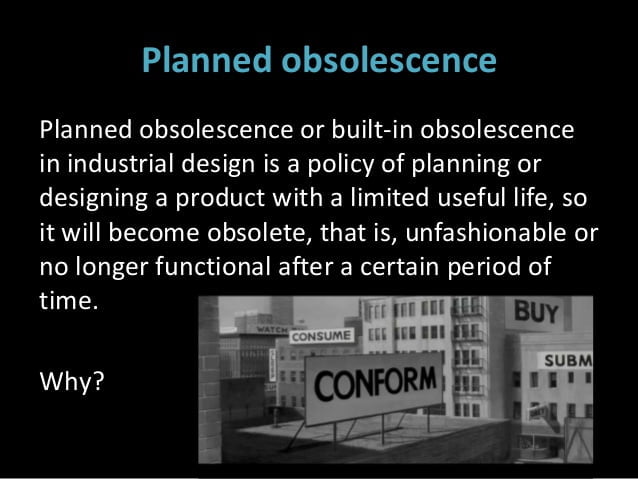 How many times have you bought an electronic device, only to find out that it has stopped functioning properly just a short time after your purchase? You spent so much money on it, and suddenly you’re sad to know that it’s not working well anymore. The result? Wasted expenses, labor, energy and finite resources, not to mention the toxic waste that ends up in landfills, poisoning the planet.

But why is that so? Why is it that most products’ lifespan is so short, considering the advanced modern technological means of production? The answer is planned obsolescence.

Planned Obsolescence and the Cycle of Perpetual Consumption

There are two main ways our society manages to keep people buying stuff:

Firstly, through advertising. We’re exposed to thousands of advertisements each and every day whose sole purpose is to convince us to keep on shopping under the promise that doing so will make our lives better. Through advertising, companies have managed to make us confuse our needs with our wants, thus making us desire to acquire things that we don’t truly need, so that we can fill in their pockets by emptying our own.

Secondly, through planned obsolescence, although this is not yet understood by many. If you didn’t know, planned obsolescence is a production technique that compels people to buy more and more stuff unnecessarily, by providing people with products of short lifespan. Instead of creating goods with the intention to last for as long as it is technically possible — considering that we are living in a finite planet with finite resources as well as the importance of saving material and human energy — companies, whose sole interest is to make sales, purposefully design products of low quality that will soon break, or become obsolete, in order to assure repeat purchases.

In the early 20th century, technical efficiency brought about by industrial development in the United States increased dramatically, which resulted in the production of higher quality goods at a much quicker pace. Although that was a great success from a technological standpoint, the fact that the goods produced had increased lifespan was found to slow down consumption — hence it was an anathema for the economy of consumerism.

In order to prevent this from happening even further, people were encouraged to make more purchases, but it was found that this alone couldn’t make a significant difference. The “solution” given in the 1930s (the Depression era) was to make it legally mandatory for all industries to produce goods of lower lifespan, which was believed to help reduce unemployment and increase consumption…

This brings us to the case of the Phoebus light bulb cartel, comprised of Osram, Philips, and General Electric and other major companies, which pioneered the strategy of planned obsolescence. In the 1930s, a single light bulb could last for up to 25,000 hours, but the cartel forced all companies involved to produce bulbs limited to a maximum life of 1,000 hours, in order to increase demand. Below is a trailer of The Light Bulb Conspiracy, a feature documentary film that investigates the evolution and impact of planned obsolescence.

In order to make sure that people make repeat purchases, most manufacturers today create products that have short life cycles. In other words, the products sold by most companies have been intentionally designed in such a way that they will break shortly after they’ve been purchased, so as to urge the general public to buy more of them in the future.

But how stupid is it to keep on having such an economic system, knowing how technically inefficient it is as well as its tremendous negative impacts on society and the natural world? Instead of urging people to buy more and more, would it not be wiser to make use of our current scientific knowledge to create an economic system that is based on technical efficiency and environmental sustainability?

I would like to leave you now with these questions in mind, which will hopefully help you to realize how obsolete our economic system is and urge you to seek out information about how alternative economic systems can be implemented that would actually promote social and environmental well-being.