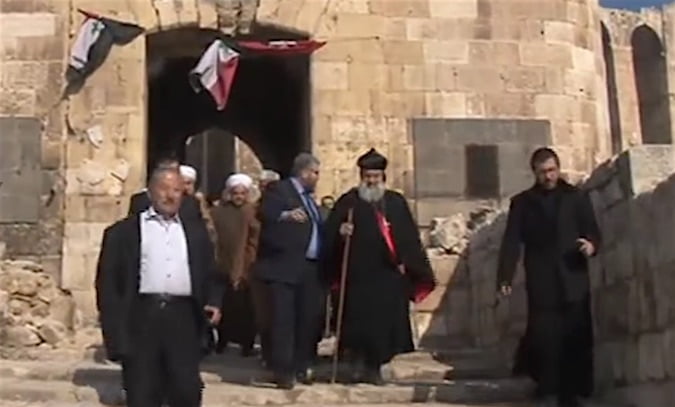 A few months ago I found a confession from an architect, as yet unconfirmed, about underground bases in Germany funded by Saudi Arabia and Qatar, with money laundering and gold price rigging through Deutche bank for the training of ISlL terrorists to be sent through Turkey into Syria and also into Ukraine to join the Kiev Nazi Junta and the persecution of Orthodox Christian Russian speaking Ukrainians in the Donbass region as well as a preparatory ground force for a later invasion of Russia directed by NATO which now surrounds Russia on all sides with Nuclear missiles. For the background to this information please see:

What Role Has Germany Played In The Establishment Of Islamic State?

How Deutsche Bank Sent Your Bullion to ISIS – Part Three

With regard to the article on underground bases, here is an example from Google Earth. I have no idea what exactly is underground in this facility. It is used only as an example. Note the solar power, the air vents at regular intervals, the land size, that it is in Frankfurt and that it is also close to the docks on the river. A tunnel to an outbuilding would provide a river escape from the city – or an entrance by boat. A team of people could be moved in and out of Frankfurt and bypass CCTV. This could also be part of the CIA Black sites around the world who along with the Muslim Brotherhood and the Wahhabi sect, train ISIL terrorists using MKULtra brainwashing techniques for proxy armies. In Syria for example, most of the terrorists, often referred to as the as yet to be identified “rebels,” are not Syrian at all but come from over 100 different countries around the world.

What has also become clear is that in the last six years there has been a major persecution of Christians in the Middle East, North Africa and Ukraine, and specifically Orthodox Christians of the Eastern Church.  The German architect who blew the whistle on the underground bases, again I state that I am still looking for confirmation on this story, was of the opinion that they were being trained to specifically target Christians and rape and murder their women and children.

While the Roman Catholic Churches, The Anglican Churches , The Methodist Churches, The Baptist Churches, The Mormon Churches, and every other Christian denomination in the West stood by while Christians in Syria were being slaughtered, crucified, beheaded, their women and children rounded up, sold on sex slave markets, their bodies harvested for organs by the Muslim Brotherhood Wahhabi ISIL sect funded by Saudi Arabia, Qatar and backed by Israel on the Golan Heights, Turkey who acted as a conduit for terrorists and arms and bought and sold illegal oil stolen from Iraq and Syria, Germany who has been laundering money for them through Deutche Bank in order to buy arms and ammunition in exchange for gold bullion which they have manipulated and rigged, France , Britain and the USA, it was the Orthodox Christians of the East, namely Russia and the Shiite Islamic Iran, Hezbollah in Lebanon and Sunni Muslims and other denominations who came to their aid. And everyone is still contemplating when, where and if Armageddon will happen? It has happened, it is happening and it continues to happen. And the many mass graves found and still to be found will bare testimony.

Further to this story, many have damned Egypt for overthrowing the supposedly democratically elected leader Morsi. But it has become clear in the last year that where ever the US is involved, and it has been knee-deep in Libya, Syria and the coup in Ukraine, elections are and have been rigged in order to get their preferred puppet in power.

Morsi of the Muslim Brotherhood which up until recently was banned altogether in Egypt due to their terrorist activities, was persecuting Christians in Egypt and burning down their churches. They also intended sending the Egyptian army into Syria to overthrow Assad, were going to hand over the Sinai to Hamas ( which was started and funded by Mossad to create controlled opposition and split the Palestinian authority) and last but not least, under the pretense of a water dispute, declare war on Ethiopia which is predominately an Orthodox Christian country.

No doubt the same atrocities against Christians in Libya, Egypt and Syria would be the result. The military and General Sisi removed Morsi and have been arresting Muslim Brotherhood members for good reason, whether the media fully understands their motivations or not, which they apparently do not and continue to push the narrative that Morsi was elected legally… which us doubtful.

This scourge has spread all over North Africa. As an example I highly recommend the movie Timbuktu. Timbuktu is an ancient city which for thousands of years has stored ancient documents. As these Muslim Brotherhood Wahhabi ISIL extremists have shown all over the Middle East, one of their missions is to destroy all ancient sites and records that refer to any time before the rise of Islam including the Egyptian temples, museums, the pyramids and the churches of Ethiopia.

In the last year alone and also ignored in all the main stream media was this report form Relevant:

A new report says 90,000 Christians were murdered for their faith in 2016 making Christians the most persecuted religious group in the world.

The Center for Studies on New Religions (Censur) will publish its annual report next month, and it’s devastating. That 90,000 number means in 2016 one Christian was martyred every six minutes…

“…Introvigne explained that most of these killings (around 70 percent) resulted from “tribal conflicts” in Africa, often because Christians refused to take part in violence.

Another part of the problem in Africa, and particularly in North Nigeria, is the terrorist group Boko Haram.

Introvigne said the other 30 percent of Christian martyrs happened in terrorist attacks and as the result of government persecution.

What is becoming apparent as we start to put the pieces of the puzzle together, is that over the last six years, Germany has played a larger role than has ever been reported on or acknowledged in the support, training,  funding and arming of Islamic extremists. As of the 3rd of January we have the following report from cnsnews , which seems to imply that Islamic extremists have been accustomed to such support in the past, and automatically expect it in the future.

Syrian Asylum-Seeker in Germany Arrested; Tried to Get ISIS Funding to Kill Non-Muslims

(CNSNews.com) – Almost two years after German authorities granted a Syrian asylum-seeker permission to stay, the man was arrested at the weekend after allegedly trying to secure funds from the Islamic State of Iraq and Syria (ISIS/ISIL) to carry out car bomb attacks that would “kill a large number of people not of the Muslim faith.”

He apparently got in touch with an ISIS contact using the free encrypted messaging app Telegram.

The suspect – who comes from Raqqa, the capital of the group’s so-called caliphate – had reportedly told the contact he would disguise the vehicles as police cars, rig them with explosives, and detonate them in crowds.

The office of the state’s chief prosecutor Christoph Rebmann said the man had told the ISIS contact he would buy vehicles for 22,500 euros ($23,580) each, repaint them, and load each one with 400-500 kilograms of explosives as part of a “holy campaign.”

The booby-trapped vehicles would be driven to crowded areas, and detonated in order to “kill a large number of people not of the Muslim faith.”

The prosecutor’s office said the suspect had admitted being in contact with ISIS, but denied plans to carry out terror attacks.

Saarland police said in a statement that the suggested attacks were to take place in Germany, France, Belgium and the Netherlands.

Police in Germany and across Europe were on high alert ahead of New Year festivities. The police said the man had been arrested in the early hours of Saturday morning, although evidence found in his possession gave no indication of a “concrete threat” to the looming New Year’s Eve celebrations.

Authorities said the man had arrived in Germany in December 2014 and was given permission to stay a month later. Chancellor Angela Merkel’s “open door” refugee and migrant policies have drawn sharp criticism from some quarters in Germany, and are seen as an important factor as the country heads towards a general election this year.

On December 19, a Tunisian man whose asylum application in Germany had been rejected drove a truck into crowds at a Christmas market in Berlin, killing 12 people. The suspect fled across Europe, making it across several borders before being shot dead during a shootout with police near Milan, Italy.

Last summer, 86 people were killed when a man, also Tunisian, drove a 20-ton truck through hundreds of people on Bastille Day in the French city of Nice.

The attacks in Berlin and Nice were both claimed by ISIS.

“Whether you are a Christian or not, respect and tolerance for all religions is a fundamental human right in all Democratic societies with a valid Constitution and Bill of Rights. Christians have equal rights as do Muslims, Jews, Buddhists and any number of other religious beliefs around the world.

All religions have one fundamental thing in common. A belief in a superior being under whatever name they choose to call it, including the Native Americans who call this superior being Wakan Tanka and Africans who call it Unkulunkulu. This is the same principle as Elohim in Genesis 1. Where we are all, regardless of race, sex or nationality, made in the image of God.

It is the same principle worshiped in a way that best suits the individual cultures and traditions of each group. None of whom should be persecuted. No one group has a corner on “God” whatever name you choose to call it, and no one group should be able to dictate to any other how they should or should not believe in such a being, let alone be persecuted for it.

In Revelation when the new Jerusalem comes down, there IS NO TEMPLE and ALL Nations are gathered together.There IS NO CHOSEN race or religion for that matter.