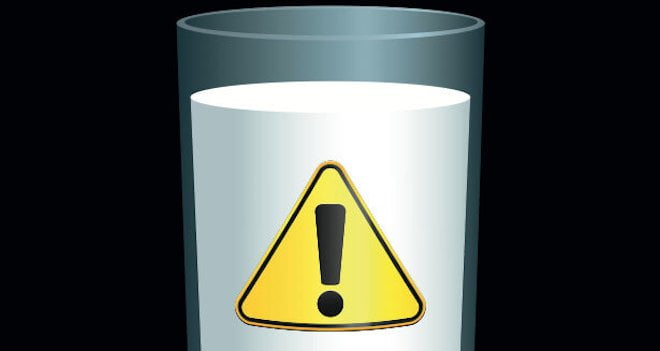 Remember those milk commercials you used to see as a kid, claiming that milk “does the body good”? It turns out that might not be true at all. In fact, it could be the complete opposite. New evidence continues to emerge suggesting that drinking milk from a cow is not really natural, and not really good nor necessary for us at all. It’s not a coincidence that approximately 65 to 75 percent of the total human population on our planet have a reduced ability to digest lactose after infancy. In some countries, more than 90 percent of the adult population is lactose intolerant.

It makes sense if you think about it, because every other species weans and then never drinks milk again for the rest of their lives. This is because they don’t have the enzyme to break down sugar in milk. In this video, Katherine S. Pollard, PhD., from the University of California shares how during human evolution, some humans experienced a mutation in the LTC gene, the lactose gene, and that these are the mutations that allow us to process lactose as adults. We weren’t born with this gene, we had to develop it.

Not only that, the animal industry alone kills billions of animals every single year, and that’s just in America alone. Factory farming is causing extreme environmental degradation and excess of greenhouses gases. Another factor to consider is animal cruelty. This is a great little video done by Erin Janus, an animal and environmental activist who is raising awareness about multiple issues. In her video she brings up some great points about the modern day dairy industry.

Below is a list put together by Sofia Pineda Ochoa, MD, a practicing physician in Houston, Texas. I added some more information under some of the points, but the idea and a large portion of the information comes from her post over at www.forksoverknives.com, (I am just relaying the information).

She was also biochemistry professor at the University of Guadalajara’s School of Medicine in Mexico, and is the co-founder of Meat Your Future, an educational non-profit that provides fact-based information about the health, environmental, and ethical implications of consuming animal products. Visit MeatYourFuture.com for more from Dr. Pineda Ochoa.

View all contributions by Sofia Pineda Ochoa, MD for forks over knives at this link.

1. It Seems Ironic, But Dairy Can Lead To Bone Problems Too

Dairy is commonly marketed as being good for our bones, but that’s primarily due to the fact that it contains calcium. This is absurd. One serving of raw kale, for example, is loaded with calcium. So much so that a 3.5 g cup of kale salad provides more calcium than one cup of milk.

“Not only has the body of scientific evidence been found inadequate to support the idea that dairy consumption promotes bone health, but numerous large-scale studies have found that consuming dairy may actually be detrimental to bone health. In fact, there is substantial data linking higher milk intake with significantly increased risk of bone fractures.” – Sofia Pineda Ochoa, MD

Some of these studies include:

Milk intake and risk of mortality and fractures in women and men: cohort studies

Dairy Foods and Bone Health: Examination of the Evidence

The Nutrition Source – Calcium and Milk: What’s Best for Your Bones and Health?

Why is it that countries with the highest daily milk intake have the highest rates of hip fractures, a key indicator of osteoporosis, and countries where the average daily calcium intake is extremely low, have a very low incidence of bone fractures? This is also discussed in the studies above.

When it comes to protein found in dairy, it also creates a very acidic environment in the body, causing what’s known as metabolic acidosis. This forces the body to compensate by leaching calcium from the bones to help neutralize the increased acidity. Over time, all of this can have severe and detrimental effects on bone health.

Casein is the main protein found in dairy, and it’s what causes metabolic acidosis, as mentioned in the above paragraph. Studies have shown that it facilitates the growth and development of cancer. Some studies have even found that cancer development could be controlled more by casein levels in diet than by exposure to the underlying carcinogen. (source)

1GF-1, a hormone that promotes cell division in cancer cells, goes up when you consume animal protein. This is why some scientists are seeking FDA approval for fasting as a potential treatment for cancer, because caloric restriction and fasting, combined with a plant-based diet, significantly lowers IG1 growth hormone levels in the body. (source)(source)(source)

One of the most comprehensive studies ever performed on this subject is The China Study, conducted by Dr. T. Colin Campbell and Dr. Thomas Campbell. Their findings showed direct correlations between nutrition and heart disease, diabetes, and cancer, proving that cultures that eat primarily plant-based diets have lower to no instances of these diseases, and that switching to a plant-based diet can successfully reverse diseases already established in the body.

In the video below he touches on Casein.

Pesticides in dairy are actually a big problem, and have been for a while. For example, not long ago a team of researchers in Hawaii tracked 450 men, which revealed a strong association between heptachlor (insecticide) and brain damage leading to Parkinson’s. Very high levels of the insecticide were found in milk in Hawaii during the 80’s.

A team of researchers focused on an environmental scandal in Hawaii to study the association between the pesticide and Parkinson’s: In 1982, tests showed Hawaii’s milk supplies had abnormally high levels of heptachlor epoxide, an organochlorine pesticide commonly used on pineapples.

The study showed that heptachlor causes the loss of brain-cells, especially among heavy milk drinkers. Residues of heptachlor were found in 90 percent of brains compared to 63 percent of those who consumed no milk. You can read more about that here.

The study showed that milk intake is associated with SN neuron loss in the brain, a hallmark of Parkinson’s.

Dairy products actually have a greater capacity to accumulate pesticides in higher concentrations; this is because of their fat content. (source)(source)(source)

“Even pesticides that have long been banned still show up when dairy products are tested. Some OCPs (like DDT, which was widely used in the past and now banned as a human carcinogen) still persist in the environment and can more easily accumulate in animal food products, including dairy.” – Sofia Pineda Ochoa

In India, dairy products have been a major source of DDT and hexac hexachlorocyclohexane (HCH) (source), and milk from dairy farms in Italy’s Sacco River Valley have been tested, showing very high levels of HCH, twenty times more than the legal limit. (source)

4. It Contains Hormones, Yes, Even if it’s Organic

Dairy is a huge source of female hormone exposure. Commercial cow’s milk contains huge amounts of progesterone and estrogen, which is concerning. Another major concern is the fact that cows are being genetically altered to continuously produce milk, even throughout their multiple pregnancies. (source)(source)(source)

Milk products labeled “organic” or “no hormones added” still have high levels of these harmful antibiotics, which are naturally produced by cows (even if those cows have not been given any additional hormones for purposes of the product label).

See additional sources and information at the bottom of this article.

The largest use of antibiotics worldwide is for livestock. (source) Much of that use is for non-therapeutic purposes, such as infection prevention and to promote feed efficiency and animal growth. (source)

Apart from the dire warnings from scientists that agricultural overuse is leading to antibiotic resistance, another problem is that antibiotic residues persist in milk and other dairy products despite protocols aimed to minimize this. (source)

It is difficult to prevent and control these antibiotic residues because milk from individual cows and farms is usually pooled together, and the administration, handling and record-keeping of animal drug use can vary significantly from one dairy operation to another. (source)

The resulting low-dose antibiotic exposure can lead to a variety of problems, from developing antibiotic resistance to allergic reactions to experiencing side-effects of the medication to which a person is exposed.

Milk and other dairy products are important vehicles for foodborne pathogens due to a variety of microorganisms they harbor (source). Even with modern sanitation requirements, including pasteurization and curing, outbreaks still occur, resulting in severe and sometimes even fatal outcomes.

Not even our food regulatory agencies expect milk will be sterile after pasteurization; the heating process is done merely to reduce (not eliminate) the amount of microorganisms.

Our immune system normally protects us from microbes and other harmful substances. But if it loses its ability to recognize and distinguish harmful substances from normal tissues and cells, it can instead mount attacks against our own bodies.

These “auto-attacks” can be triggered by exposure to foreign peptides (including animal protein fragments found in dairy), which have similarities to components in the human body. This can result in our immune system becoming “confused” and misidentifying tissues in our body as “foreign” and thus in need of being attacked and destroyed.

Dairy is associated with an increased risk of several immune-related disorders (from allergic conditions to autoimmune diseases), many being life-changing and difficult to treat. The associations with type 1 diabetes and multiple sclerosis are particularly concerning: