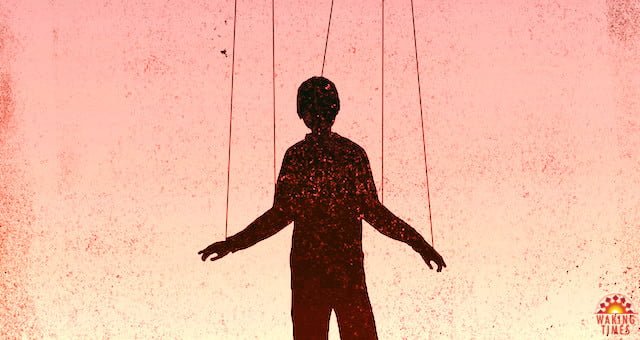 “State is the name of the coldest of all cold monsters. Coldly it lies; and this lie slips from its mouth: I, the state am the people” ~Friedrich Nietzsche

Statism is a pandemic religion, a psychosocial disease that has swept the world up in a web of political delusions. It has convinced people, through conditioning and propaganda, to be dependent upon the state. When really it’s all just smoke and mirrors thrown up by an entrenched authority so that it can maintain its power and control over the people. And that’s the crux: the power dynamic. People should have power over the government, not the other way around. As Alan Moore said, “People shouldn’t be afraid of their government. Governments should be afraid of their people.” Indeed, self-rule is far superior to state-rule. The problem is, most people aren’t aware of it.

Amidst this rampant statism stands the mass-man, the ignorant majority, the statist puppet, naïve to the political power swings surrounding him, dumb to the way things actually work. Sadly, statist puppets represent the majority of “we the people.” It’s not their fault, really. It’s simply how the majority of us were culturally conditioned to believe. We were all born into it, to a certain extent. But there comes a time when we must choose: become aware of how power works, or remain ignorant and powerless.

Here are four signs you may be a statist puppet.

1. You Believe State Laws are Valid and Just

“Nothing in all the world is more dangerous than sincere ignorance and conscientious stupidity.” ~Martin Luther King Jr.

Rather than question the validity of laws, you just go with the oppressive flow, unaware that most laws are outdated and immoral, and that many laws are set up just to maintain a “legal” extortion racket that makes the poor poorer and the rich richer. But you, being a statist puppet, don’t want to hear any of that “nonsense”. Cognitive dissonance kicks in and before you know it the comfortable, yet weak statist conditioning worms its way back in, whispering sweet lies into your ear, “The system works. Man-made laws are necessary. Obey!”

You would rather be kissed with lies than slapped with truth, and so you just go through the statist motions of thinking, “It’s just the way things are. Who am I to question it?” Not realizing that, if you want to change the world you must first change yourself. As Margaret Mead once said, “Never doubt that a small group of thoughtful, committed citizens can change the world. Indeed, it is the only thing that ever has.” The first stage of self-change is questioning the way you perceive reality, which means questioning everything: society, politics, laws, the list goes on.

You have a choice: remain a statist puppet, ignorantly indifferent; or learn how to become free, purposefully proactive. The choice is yours. But, and here’s the misery of it all, remaining a statist puppet is easy, comfortable, and secure; where as becoming free is difficult, uncomfortable, and scary. It may mean challenging entrenched laws in ways that could get you in trouble with the law. It may even mean becoming David and challenging Goliath (the state) though it may be scary as hell.

2. You are Blindly Patriotic

“Whenever you find yourself on the side of the majority, it is time to pause and reflect.” ~Mark Twain

It’s more than just your stars and stripes underwear/blindfold combo that makes you a statist puppet, par excellence; it’s the way you bang your chest about randomly being born in one nation rather than another, and then proceed to holler as loud as you can about how your nation is the best in the world just because you happened to have been born into it. You’ve probably never even been to another country, but when you’re certain, you’re certain, right? Regardless of whether or not your nation is the greatest, the problem is your blind certitude, your willful ignorance stinking up the place and closing your mind into a xenophobic fly trap.

You’ve yet to mature into one with cosmopolitan disposition, someone who understands that everything is connected in an interdependent web that binds the planet into one organic whole. And so the superior ideal of world-patriot has eluded you. You’re so busy ballyhooing statist propaganda, you don’t even realize there are strings dancing you into a patriotic puppetry that keeps you blind to the way the world actually works. God forbid you should slip that blindfold off and learn how to see beyond the shadows cast within the cave of statism that has kept you in the dark for far too long.

3. You Think it’s Moral and Just That the Government Forces Taxation

“No man is free, who is not master of himself.” ~Epictetus

You cannot seem to understand why taxation is theft. It’s moral and just if it is voluntary, but as far as the state is concerned it is not voluntary. Therefore, it is immoral and unjust. Even worse, it is forced, and the state is willing to use the threat of imprisonment and violence in order to extort it from you. But you’re so conditioned and brainwashed by such propaganda as, “Nothing is certain but death and taxes,” that you just shrug your shoulders like a good little statist puppet and tell yourself, “It’s just the way things are. We need taxes. Muh roads!”

Cognitive dissonance has a vice grip on your reasoning and you can’t seem to realize that the only reason things are the way they are is because the state has convinced you that there is no other way. But there is always another way. You could recondition your statist conditioning. You could adopt the anthem “no masters, no rulers” as your paradigm of hope. You could train yourself how to become free despite the extorting tyranny of the state.

4. You’re Conditioned to Think You Need to be Policed

“The rich may have lots of green paper that many pretend are worth something. The primary purpose of the police is to enforce the delusions of those with lots of pieces of green paper. Those without the green papers generally buy into these delusions almost as quickly as those with. These delusions carry with them extreme consequences in the real world.” ~Derrick Jensen

Here’s the thing: there is nothing wrong with an entity hiring a police force to protect itself and it’s assets, (that’s defense) but there is everything wrong with that entity (the state) using a police force to extract money from free people (that’s offense) for violating petty crimes which do not directly affect the entity or its assets. Once a police force goes beyond defense, it then becomes overreaching, offensive, and immoral, which is a slippery slope into tyranny. And here you are, slipping down that slippery slope, unaware of the diabolical tyranny looming all around you.

Having police is fine as long as there are checks and balances in place that prevent the police from having the power to force its entity’s will upon others who do not respect and or recognize the will of the entity. Now, the entity in question just so happens to be the overreaching, all-powerful, totalitarian state that has forever been brainwashing you into believing you need policing, but that doesn’t get you off the hook for continuing to subscribe to the blatant overreach and abuse of power of the police that continues to oppress people through the monopoly on violence.

The bottom line is this: A police force that is defense-minded is moral and just; whereas, a police force that is offense-minded is immoral and unjust. There really is no way to wiggle out of this fact. No matter how much your cognitive dissonance rises up to “save” you from the discomfort that comes from realizing that you have been bamboozled. For your entire life you’ve believed that the offense-minded cops policing our country on behalf of the state are moral and just. You were tricked, hoodwinked, conned, and lied to. But there is a way out – learn how to become free.