Prepare For Change
Home Awakening War Is a Racket: The US Spreads Terror, Then ‘Fights’ It 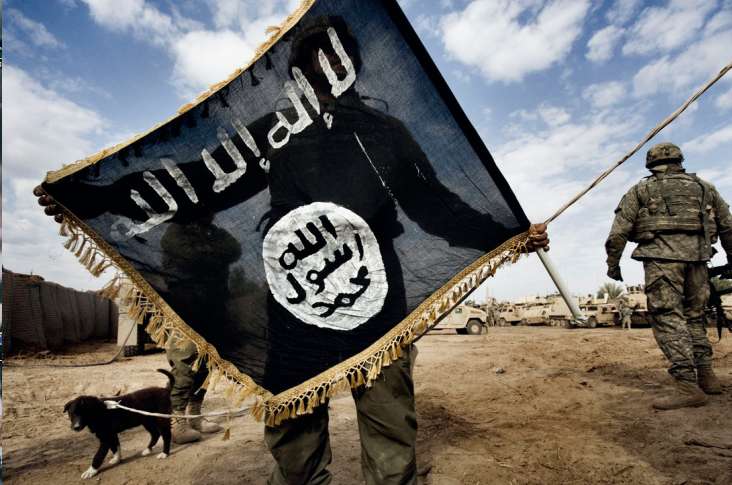 Editor’s Note: While we disagree with Porter’s conclusion (specifically, that the US ‘sacrificed the priority of countering al-Qaeda to maintain the alliances’; we don’t believe fighting al-Qaeda has ever been a priority for Washington, quite the opposite, actually) this is an important piece because it shows the growing disillusion — and disbelief — with US foreign policy in the Middle East

New York Times columnist Tom Friedman outraged many readers when he wrote an opinion piece on 12 April calling on President Trump to “back off fighting territorial ISIS in Syria”. The reason he gave for that recommendation was not that US wars in the Middle East are inevitably self-defeating and endless, but that it would reduce the “pressure on Assad, Iran, Russia and Hezbollah”.

That suggestion that the US sell out its interest in counter-terrorism in the Middle East to gain some advantage in power competition with its adversaries was rightly attacked as cynical.

But, in fact, the national security bureaucracies of the US – which many have come to call the “Deep State” – have been selling out their interests in counter-terrorism in order to pursue various adventures in the region ever since George W Bush declared a “Global War on Terrorism” in late 2001.

The whole war on terrorism has been, in effect, a bait-and-switch operation from the beginning. The idea that US military operations were somehow going to make America safer after the 9/11 attacks was the bait. What has actually happened ever since then, however, is that senior officials at the Pentagon and the CIA have been sacrificing the interest of American people in weakening al-Qaeda in order to pursue their own institutional interests.

‘The only game in town’

It all began, of course, with the invasion of Iraq. Counter-terrorism specialists in the US government knew perfectly well that US regime change in Iraq through military force would give a powerful boost to Osama bin Laden’s organisation and to anti-American terrorism generally. Rand Beers, then senior director for counter-terrorism on the National Security Council staff, told his predecessor Richard Clarke in late 2002, “Do you know how much it will strengthen al-Qaeda and groups like that if we occupy Iraq?”

After it quickly became clear that the US war in Iraq was already motivating young men across the Middle East to wage jihad against the US in Iraq, the chief architect of the occupation of Iraq, Paul Wolfowitz, came up with the patently false rationalisation that Iraq would be a “flytrap” for jihadists.

But in January 2005, after a year of research, the CIA issued a major intelligence assessment warning that the war was breeding more al-Qaeda extremist militants from all over the Middle East and even giving them combat experience that they would eventually be able to use back home. In a 2006 National Intelligence Estimate, the intelligence community warned that the number of people identifying themselves as jihadists was growing and was becoming more widespread geographically and even the predicted growing terrorist threats from “self-radicalized cells” both in the US and abroad.

The war managers continued to claim that their wars were making Americans safer. CIA director Michael Hayden not only sought to sell the flypaper argument on Iraq, but also bragged to the Washington Post in 2008 that the CIA was making great progress against al-Qaeda, based mainly on its burgeoning drone war in Pakistan.

But Hayden and the CIA had a huge bureaucratic interest in that war. He had lobbied Bush in 2007 to loosen restraints on drone strikes in Pakistan and let the CIA launch lethal attacks on the mere suspicion that a group of males were al-Qaeda.

It soon became clear that it wasn’t really weakening the al-Qaeda in the northwest Pakistan at all. Even drone operators themselves began privately criticising the drone attacks for making many more young Pakistanis hate the United States and support al-Qaeda. The only thing Leon Panetta, Hayden’s successor as CIA director, could say in defence of the programme was that it was “the only game in town”.

Barack Obama wanted out of a big war in Iraq. But CENTCOM Commander Gen David Petraeus and Joint Staff director Gen Stanley A McChyrstal talked Obama into approving a whole new series of covert wars using CIA drone strikes and special operations commando raids against al-Qaeda and other jihadist organisations in a dozen countries in the Middle East, North Africa and Central Asia. At the top of their list of covert wars was Yemen, where al-Qaeda in the Arabian Peninsula (AQAP) had just been formed.

Since 2009, the Joint Special Operations Command and the CIA have launched 16 cruise missile strikes and 183 drone strikes in Yemen. Unfortunately, they lacked the intelligence necessary for such a campaign. As many as one-third of the strikes killed innocent civilians and local notables – including the cruise missile strike in December 2009 which killed 41 civilians and attack on a wedding party in December 2013.

Virtually every independent observer agrees that those killings have fed Yemeni hatred of the US and contributed to AQAP’s lustre as the leading anti-US organisation in the country.

The CIA again claimed they were doing a splendid job of hitting AQAP, but in fact the Yemeni offshoot of al-Qaeda continued to be the primary terrorism threat while the covert war continued. Three times between late 2009 and 2012, it mounted efforts to bring down airliners and nearly succeeded in two of the three.

In late 2011 and early 2012, the contradiction between the US pretension to counter-terrorism in its Middle East policy and the interests sharpened even further. That’s when the Obama administration adopted a new anti-Iran hard line in the region to reassure the Saudis that we were still committed to the security alliance. That hard line policy had nothing to do with a nuclear deal with Iran, which came more than a year later.

At first, it took the form of covert logistical assistance to the Sunni allies to arm Sunni anti-Assad forces in Syria. But in 2014, the Obama administration began providing anti-tank missiles to selected anti-Assad armed groups. And when the Nusra Front wanted the groups the CIA had supported in Idlib to coordinate with the jihadist offensive to seize control of Idlib province, the Obama administration did not object.

The Obama national security team was willing to take advantage of the considerable military power of the Nusra Front-led jihadist alliance. But it was all done with a wink and a nod to maintain the fiction that it was still committed to defeating al-Qaeda everywhere.

When the Saudis came to Washington in March 2015 with a plan to wage a major war in Yemen against the Houthis and their new ally, former president Ali Abdullah Saleh, the deep state was ready to give Saudi a green light. A predictable consequence of that decision has been to fuel the rise of AQAP, which had already emerged as the primary threat of terrorist attack on the US, to an unprecedented position of power.

As documented by the International Crisis Group, AQAP has been the biggest winner in the war, taking advantage of state collapse, an open alliance with the Saudi-supported government and a major infusion of arms – much of its provided indirectly by the Saudis.

Endowed with a political strategy of playing up AQAP’s role as champion of Sunni sectarian interests against those Yemenis whom they wrongly call Shia, AQAP controlled a large swath of territory across southern Yemen, with the port of Mukalla as their headquarters. And even though the Saudi coalition recaptured the territory, they maintain a strong political presence there.

AQAP will certainly emerge from the disastrous war in Yemen as the strongest political force in the south, with a de-facto safe haven in which to plot terrorist attacks against the US. And they can thank the war bureaucracies in the US who helped them achieve that powerful position.

But the reason for the betrayal of US counter-terrorism interests is not that the senior officials in charge of these war bureaucracies want to promote al-Qaeda. It is because they had to sacrifice the priority of countering al-Qaeda to maintain the alliances, the facilities and the operations on which their continued power and resources depend.

Gareth Porter is an independent investigative journalist and winner of the 2012 Gellhorn Prize for journalism. He is the author of the newly published Manufactured Crisis: The Untold Story of the Iran Nuclear Scare.