Prepare For Change
Home Awakening In One Year, Opiates Killed Ten Times as Many Americans as ALL... 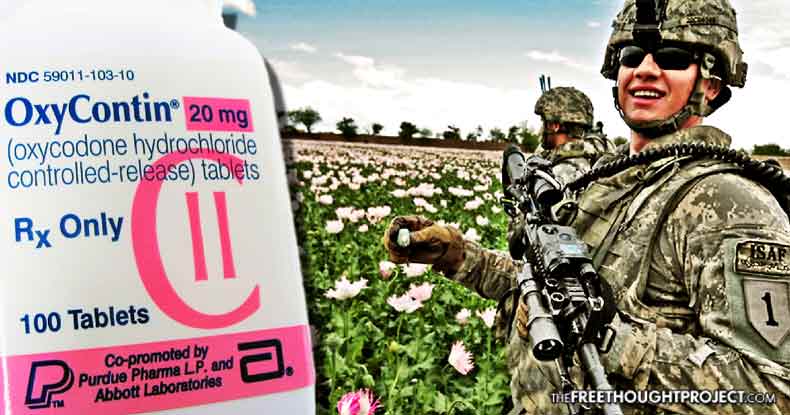 Safety of the people and security of the nation should be priority number one for any leader who wishes to have a successful tenure in office, perhaps even multiple terms — and the President of the United States is no exception to this model.

So, why, then, has a killer of tens of thousands each year still on the loose inside those putatively impermeable borders? How could this executioner, unmasked and identified, roam main streets of small towns as comfortably as a seedy alley in some decrepit corner of an urban metroplex — unhindered by the threat of detention or arrest?

How could this nefarious reaper sever the lives of ninety-one Americans each and every day, yet — rather than earn a notorious status as Enemy of the Public Number One — this killer is encouraged to thrive, intentionally or not, by those supposedly the most trusted to guard us from bodily harm?

Since the attacks of 9/11, the United States has waged the pernicious War on Terror — combating a concept most of its citizenry will never encounter firsthand — nearly everywhere on the planet, even toppling ostensively brutal but sovereign regimes in its name.

Yet, Terror — its tactics used most often by disciples fighting in the name of religion — has not been as efficacious in destroying American lives as the opioid medications prescribed, without irony, to kill their pain.

In 2014, the span of a single year, an astounding 29,467 Americans died by overdose of opioid-related drugs, including prescriptions — and the following year saw more than 15,000 lose their lives to overdose on opioid medications legally prescribed by medical personnel.

Unintentional drug overdose is now the primary cause of accidental death’ in the U.S. — and prescription opioid industry bears a significant bulk of culpability in the problem.

Many opiate addicts never sought the escape of a substance recreationally — but were given prescriptions for medications like Vicodin (hydrocodone) or even OxyContin (oxycodone) following surgery, a serious injury, or as treatment for the chronic pain of another illness.

What might seem innocuous when written by a physician can quickly turn malevolent — a single month of prescribed medication might not be sufficient to fight the pain of a complex fracture or chronic ailment. If the prescriber then refuses an extension of that opioid — all-too frequently, under the benign premise of preventing dependence — that patient might seek other means to procure the same relief.

Many turn to heroin — highly illegal, but readily available from the black market — and without the rigorous federal restrictions guarding its legal opioid brethren. In fact, a large percentage of heroin addicts began using after prescriptions for strong opioids like OxyContin ran their course, leaving the patients suffering without recourse.

Every day, around 1,000 people are treated in hospital emergency rooms for misuse of prescription opioids — and in 2014, alone, roughly 2,000,000 abused or were dependent on those opioid medications. One-quarter, given such a prescription on a long but terminal basis, struggles with dependency.

Fifteen-thousand people perished by overdosing on prescription opioid painkillers in 2015 — and the figures compiled by the U.S. Centers for Disease Control and Prevention grow exponentially by the year. Even as the War on Terror rages on around the globe.

Indeed, veteran American troops have stumbled on that war’s undiscussed elephant in the room while fighting the supposed terrorists we’re made to believe threaten our security, overseas in Afghanistan — the origin, by most reports, of the majority of the world’s opium supply.

Immediately prior to the U.S. invasion of Afghanistan some sixteen years ago — in an irony of tragic shame to warhawk politicians and the pharmaceutical industry — the Taliban had all-but eradicated the opium poppy from the fertile lands under its control, evidenced by a record-smashing low, 185-ton, harvest.

Reversing that became paramount priority — even before dust kicked up by the boots of incoming soldiers had time to settle.

“Within six months of the U.S. invasion,” wrote Matthieu Aikins for the December 4, 2014, Rolling Stone, “the warlords we backed were running the opium trade, and the spring of 2002 saw a bumper harvest of 3,400 tons.”

To call the revival a success would severely undercut the facts. Production of Afghani opium doubled by 2014, and Afghanistan’s potent poppies — rumored to be rivaled in quantity only by secreted fields of the North Korean government — soon dominated markets, comprising 90 percent of the entire planet’s supply.

Opiates fuel a crisis of dependence and addiction that — in tandem with a dearth of treatment programs attainable by those with low incomes or lacking insurance — has mushroomed into an epidemic, without indication of diminishing soon.

Correlation might not equal causation, but that span and gravity of that epidemic run in lockstep with the astronomical rise in production of Afghanistan’s opium — and both share a birthdate roughly coinciding with the U.S. invasion.

Opiates are profitable. Opioid prescription painkillers — doled out to Americans for temporary relief of pain, four times more often than in 1999 — are Big Pharma’s bread and butter. Even when the health of the millions stands in peril — an epidemic reaching across class, gender, race, and income lines to perfect a stranglehold — prescription opioids profit their manufacturers and distributors so many billions, ethics can’t take priority.

Sadly, and with tragic irony, the opioid crisis rekindled the flames of another highly ineffective war — the war on drugs. This most violent, futile, and rights-violating attack on Americans does nothing to stop the problem and only serves to bolster the bottom line of the prison industrial complex.

In fact, the war on drugs has served its purpose in creating the very crisis it ostensibly fights — a result known by all those who’ve ever taken the time to study the horrid effects of prohibition.

It must be understood, black-clad terrorists shouting, ‘Death to America!’ might offer a captivating tidbit for nightly national news. However, in actuality, these militants do not present so much as a distant threat to anyone living in the confines of the United States.

Rather, the unscrupulous players in the pharmaceutical industry, motivated by profit more than individuals’ long-term health — and their lackeys in government, specialists in lax legislation tough in language, only — whose decisions, given the chain of responsibility in crises, can ultimately destroy countless families.

Our government will wage this War on Terror, assumedly until the ‘threat’ of ‘terrorism’ decreases substantially. In the meantime, the opium overseas, guarded by U.S. troops and tended by local farmers both incentivized by and hawkishly watched by Taliban warlords, will be to blame for the epidemic killing scores the terrorists otherwise couldn’t.
Source: http://thefreethoughtproject.com/70271-2/#s3sQhpF1b83I6uD7.99