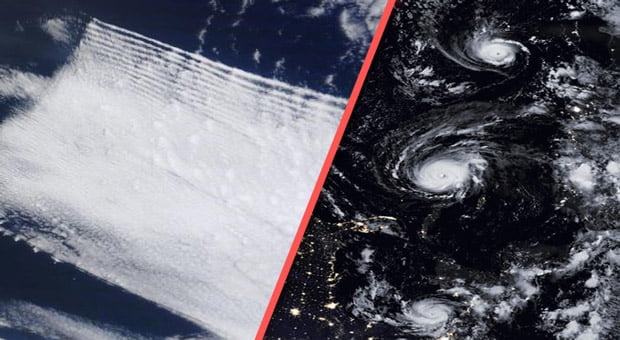 As Hurricane Jose is set to reach a category 5 storm following in Irma’s pathway of destruction, fresh evidence emerges from NASA satellite images that the recent record-breaking weather is actually man-made and that more is to follow.

As Hurricane Katia joins forces to make an unprecedented trio of hurricanes, serious questions are being asked about the true nature of these storms.

The US is still recovering from the devastating impact Hurricane Harvey inflicted on Texas just last week, as citizens brace for yet further havoc.

Now images obtained from the National Aeronautics and Space Administration orbiting satellites have shown strange anomalies in the weather that prove it is being manipulated to create deadly storms and earthquakes.

Anon reports: Patrick Roddie, an activist known for taking rain samples and proving their contamination with high levels of aluminum and other geoengineering related materials found NASA Worldview satellite pictures, that show suspicious patterns around the recent hurricanes Harvey and Irma, and the paths they follow/are about to follow.

In this video, one can see the feathery features, haze, and wave patterns commonly seen in a chemtrail sprayed and electromagnetically zapped sky, appearing around the hurricanes and their paths.

Lines of sprayed aerosols and wispy, feathery features easily recognizable as geoengineering material were spotted around the recent hurricanes.

The anomalous nature of hurricanes Harvey and Irma, and possibly the new hurricanes Jose and Katia, should prompt people to investigate whether or not geoengineering played a role in this.

Guardian reports: The US national hurricane center issued hurricane warnings for the eastern Caribbean islands of Sint Maarten, St Martin and St Barthelemy, and tropical storm warnings for Barbuda and Anguilla and Saba and St. Eustatius. A tropical storm watch is in effect for British Virgin Islands, St. Thomas and St. John and Antigua.

In the Gulf of Mexico, Hurricane Katia made landfall north of Tecolutla, Mexico early on Saturday. The storm has since been downgraded to a depression near the Sierra Madre mountains, but officials are warning of “life-threatening flash floods and mudslides.”

Many of Irma’s victims have already fled their devastated islands on ferries and fishing boats for fear of Jose, which could punish some places all over again this weekend.

“I don’t think it takes a rocket scientist to know that further damage is imminent,” said inspector Frankie Thomas of the Antigua and Barbuda police.

Authorities said about 90% of Barbuda, a coral island rising just 125 feet (38 meters) above sea level, had been devastated by Irma.

In Mexico, which is also dealing with its most powerful earthquake in a century, Katia was expected to weaken rapidly over the next day, the USNHC said. Category 1 is the NHC’s weakest hurricane designation while category 5 is the strongest. Storms of category 3 and above are defined as major hurricanes.

Veracruz state officials said in a statement that the storm could cause landslides and flooding, and urged people living below hills and slopes to be prepared to evacuate.

Luis Felipe Puente, head of Mexico’s national emergency services, said this week that Katia has “worrying characteristics” because it is very slow-moving and could dump a lot of rain on areas that have been saturated in recent weeks.