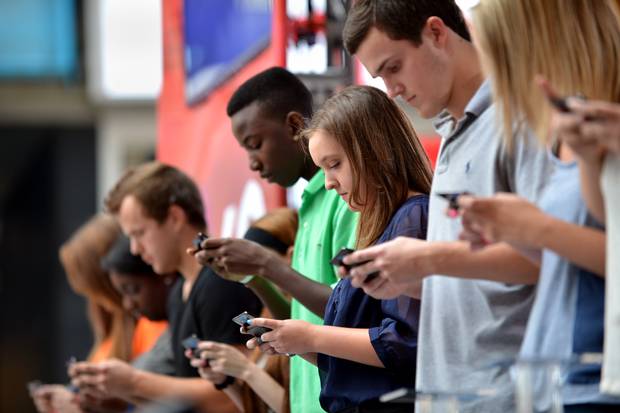 It’s concerning to see just how many young people have become consumed by their smartphones. We know the dangers associated with the use of various electromagnetic emitting devices, like cells phones and WiFi, and how cellphone companies suggest that users “use hands-free operation if it is available and keep the BlackBerry device at least 0.59 in (15mm) from your body (including the abdomen of pregnant women)” to avoid radiation exposure. But what about their psychological risks?

Jean Twenge, a professor of psychology at San Diego State University, was recently interviewed by NPR‘s Audie Cornish on “All Things Considered.” In the interview, she argues that we can directly link the loneliness that has become so prevalent in modern society to the introduction of smartphones in 2012. While “you can’t absolutely prove causation,” she says, through “a bunch of different studies, there’s this connection between spending a lot of time on social media and feeling lonely.”

Twenge has been researching generational differences for 25 years and has shared her findings in her book iGen, a name she uses to describe young people born between 1995 and 2012. She adapted her book in a story published on the Atlantic, where she delves deeper into her concerns:

Around 2012, I noticed abrupt shifts in teen behaviors and emotional states. The gentle slopes of the line graphs became steep mountains and sheer cliffs, and many of the distinctive characteristics of the Millennial generation began to disappear. In all my analyses of generational data—some reaching back to the 1930s—I had never seen anything like it.

It’s not all bad news, however. Homicide rate among teens has declined, teens are drinking less, driving later, and waiting to have sex, making them “physically safer” than their predecessors. But the role smartphones occupy in a teen’s life has gone deeper, making them more vulnerable psychologically instead.

Teens are also choosing to spend more time “hanging out with friends” via social media rather than in person. A 75-year-old study directed by Harvard psychiatrist Robert Waldinger determined that “good relationships keep us happier and healthier. Period.” The study explicitly confirms that interaction is necessary for us to thrive, as loneliness is a killer, adding further weight to the findings of Twenge’s research.

“Being more connected to family, friends, and community makes for happier, physically healthier, and longer lives compared to people who are less well-connected,” the study asserts.

The suicide and depression rate for teens has skyrocketed since 2011. “It’s not an exaggeration to describe iGen as being on the brink of the worst mental-health crisis in decades. Much of this deterioration can be traced to their phones,” says Twenge.

Twenge also refers to iGen’s surprising lack of independence. They depend solely on their parents for transportation and are less likely to have a job in high school. “Across a range of behaviors—drinking, dating, spending time unsupervised— 18-year-olds now act more like 15-year-olds used to, and 15-year-olds more like 13-year-olds. Childhood now stretches well into high school,” she says. This is truly concerning, particularly because when an individual doesn’t feel capable of caring for themselves or taking important risks, they are less likely to feel inspired — an indescribable feeling that helps to motivate an individual to spring to action — and become confident in their abilities and comfortable in their skin.

With the amount of time teens are spending at home and not engaging with friends, you’d assume that they probably have a better relationship with their family, but the opposite seems to be true. They are more likely to seclude themselves in a space where they can freely access social media platforms and engage with friends there.

Many parents assume that if their child is at home rather than out spending time with friends, they’re less likely to drink or have sex. What parents don’t realize is that the biggest danger is lying right in plain sight. Parents need to become more aware of the screen time their child is engaging in, and Twenge suggests prolonging the introduction to a smartphone as long as possible: “If you feel they need a phone, say, for riding a bus, you can get them a flip phone. They still sell them. And then once your teen has a smartphone, there are apps that allow parents to restrict the number of hours a day that teens are on the smartphone, and also what time of day they use it.”

There are so many risks associated with online use for children, and there are even sneaky waysthey can be manipulated and tricked into engaging with or watching something inappropriate. Aside from SM use, texting has been found to have a very negative affect on us psychologically as well.

It appears that human connection is an essential ingredient to overall happiness and well-being. When we engage with others, we are offered the opportunity to experience an array of emotions and create timeless memories. Lessons will be learned and friendships crafted, so if you haven’t yet, call up your best friend today and spend some time together!

What are ways you’ve limited your screen time or that of your child? If you’re a parent, have you noticed any behavioural changes in your teen since they got a smartphone?