Prepare For Change
Home Awakening Do You Know What We Are Breathing In From Weather Geoengineering Efforts? 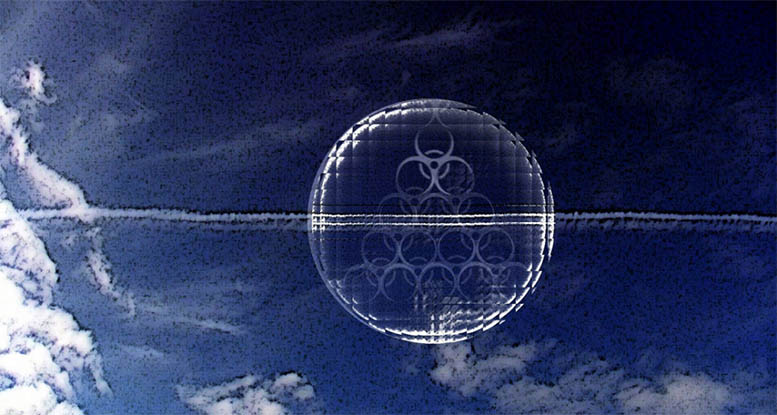 Air is one of the PRIMARY elements of life; without it for about three minutes, we cannot survive. If air is such an important biological and functional life component, why are weather geoengineers messing around with it?

They’re not, according to ‘official source’ denials.

Well, think again, since many independent and non-cabal-financially-sponsored “non-consensus scientists” are finding STUFF in the air we breathe that should not be there unless placed for nefarious reasons. What a mouthful! Is there any documentation to substantiate what I say? But of course! Would I say it, if there were none?

Well, I’m going to explain some things readers may find doubtful, interesting and even frightful, but cannot deny once you stop playing around with your iPhones, etc. and look up and study the sky, which no longer is the crystal clear gorgeous blue it used to be in my youth, since I was born during the Depression years.

Nano particles and Smart Dust [is] being absorbed by all of us via inhalation of chemtrail fallout and from contaminated grocery store food (including organically grown food) where the crops pick up and absorb the same Nano particles and Smart Dust that we are breathing in. In addition, food sources are intentionally being sprayed with Nano technology. I first became aware of “nanobots” as a component of chemtrails in 2005 when the topic of Morgellons first surfaced on the internet. These nanobots were somehow integrating themselves with biological functions inside people’s bodies producing these colored fibers and wire-like threads that would ooze out of lesions on the skin. I had no idea why some people produced the fibers and had the sensation of insects crawling under their skin, while other people had no symptoms at all. [1]

Tony should know; he’s been making videos about them! Tony explained them in this podcast.

He explains that many thousands of Nano particles are now residing in EACH human cell of all human beings (including you) and are integrating themselves with our biological functions to re-program our body (and our DNA) into an Android-like hybrid, that is part human biology and part Artificial Intelligence robotics. These Nano particles inside our bodies are activated by (and programmable from a distance) using radio frequencies (microwaves) and ELF waves. That means we are ALL being set up for a 21st Century version of enslavement employing electronic mind-control and body-control coercion harassment (which is what Targeted Individuals who call into the Ella Free podcasts are experiencing and talking about). [1]

Furthermore, there is much speculation the neurotoxic chemicals in all vaccines are part of that artificial intelligence robotics program!

There’s an amazing, astounding and seemingly unbelievable indication of what Tony contends, as a result of his research, being found in human bodies, and he demonstrates that using his arm and a special Anti-Nano Concoction protocol he created.

The above video, which I have watched in full and taken notes on, must be considered very seriously, as it deals with emerging protocols to counter Nano technology, which very few individuals know anything about, but all of us are exposed to and compromised by.

After watching more than an hour of his creating the electro-field bucket, Tony discusses the ‘recipe’ for the anti-Nano soaking mixture around 1 hour 12 minutes, more or less. The mixture includes cheap white vinegar, distilled water, salt, DMSO and oil, either olive or almond. The exact measurements are given.
At 1 hour 24 minutes “results” (Nano-dust particulates) start showing up emerging from Tony’s arm soaking in the anti-Nano mixture. Tony recommends soaking your feet, but with certain precautions.

Nano-dust and particulates make all human bodies receivers and transmitters, a necessary component for control of humans because we can be controlled by microwaves transmitted to those frequency receivers residing within our bodies. Hard to believe, isn’t it?

Furthermore, it’s my understanding that special “matching” frequencies even can be “designed” for those who have given DNA and body tissues sample, e.g., blood tests, which have been collected by certain ‘vested interest’ agencies doing such AI/transhumanism technology work.

Why is this happening?

It’s part-and-parcel of global weather geoengineering or “chemtrails,” which literally rain down 43 known chemicals and metals, especially aluminum—the key “tagging” mineral/element, which also is a constituent in most, if not all, vaccines.

Homo sapiens literally are being redesigned into another species created by man-made-technology. Will it be called Homo Nano-particulatem?

Is that the reason why “Sophia,” the humanoid robot, officially was made a ‘citizen’ of Saudi Arabia?

A special hat tip and thanks to Elana Freeland.