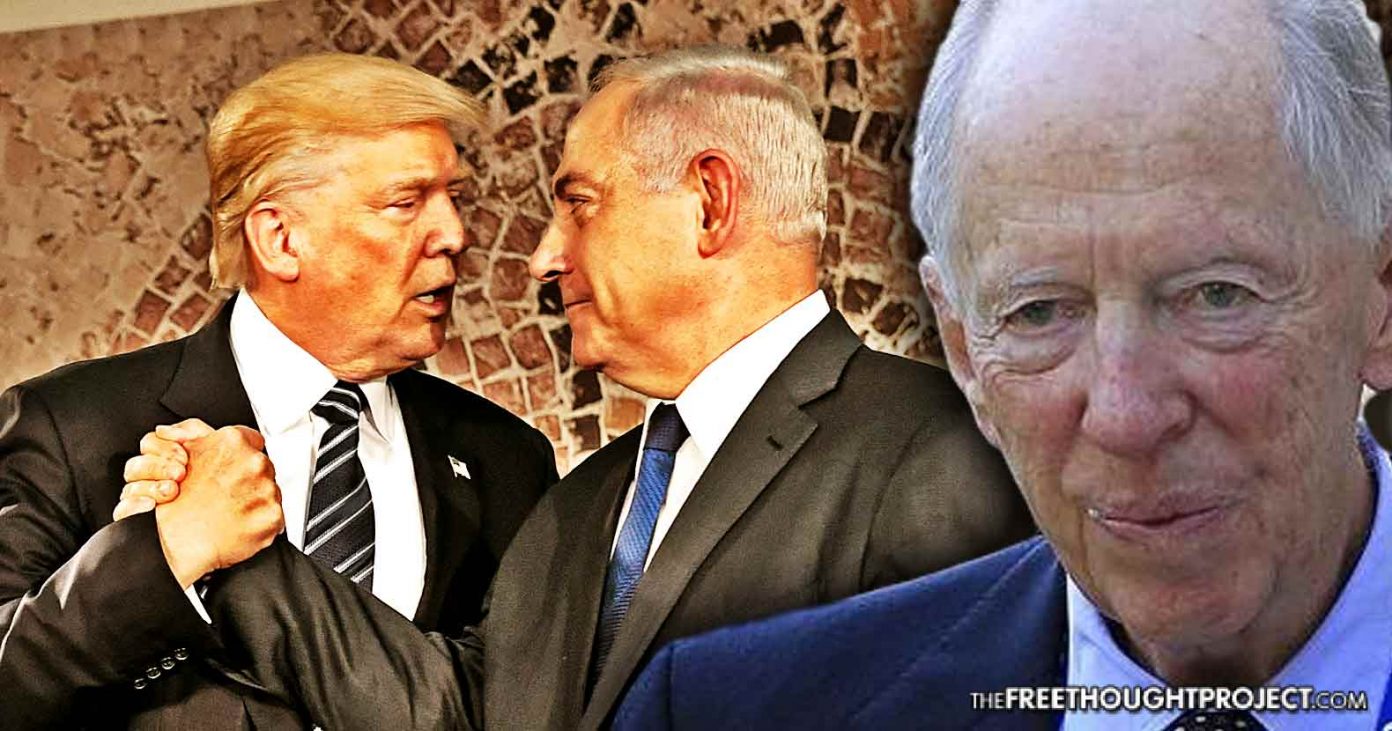 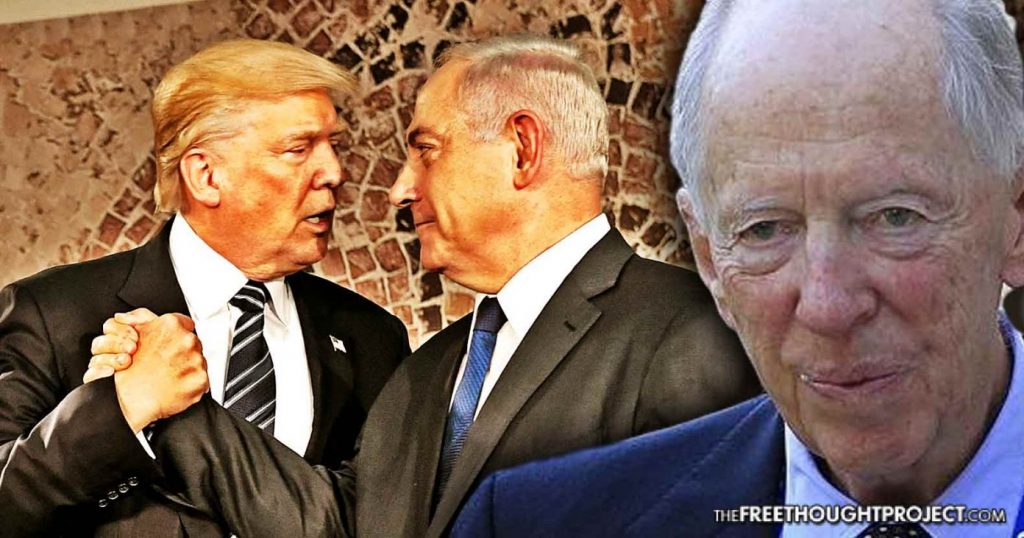 Washington, D.C. — While President Donald Trump has often referred to himself a “friend of Israel,” he has now been officially recognized for that stance by a pro-Zionist group that advocates for Jewish nationalism.

“We believe no American president in history has done more to defend the Jewish people in the United Nations,” Evans added.

The Friends of Zion Museum is located in Jerusalem and works to push the Israeli agenda while attempting to legitimize the taking of Palestinian lands.

One of the biggest moves, celebrated by Trump’s Zionist backers, was his recent announcement recognizing Jerusalem as the capital of Israel.

“This president is an anomaly. He is an anomaly because he keeps his promises. Evangelicals, conservatives across this country are grateful for the fact that he has actually done exactly what he campaigned on,” said Tony Perkins, president of the Family Research Council.

Many people fail to understand what encompasses Zionism.

For those unfamiliar with the term Zionism, Vox explains:

Zionism is Israel’s national ideology. Zionists believe Judaism is a nationality as well as a religion, and that Jews deserve their own state in their ancestral homeland, Israel, in the same way the French people deserve France or the Chinese people should have China. It’s what brought Jews back to Israel in the first place, and also at the heart of what concerns Arabs and Palestinians about the Israeli state.

Arabs and Palestinians generally oppose Zionism, as the explicitly Jewish character of the Israeli state means that Jews have privileges that others don’t.

For instance, any Jew anywhere in the world can become an Israeli citizen, a right not extended to any other class of person. Arabs, then, often see Zionism as a species of colonialism and racism aimed at appropriating Palestinian land and systematically disenfranchising the Palestinians that remain. Arab states actually pushed through a UN General Assembly resolution labeling Zionism “a form of racism and racial discrimination” in 1975, though it was repealed 16 years later.

Despite the Zionist position, Israel is on track to become an apartheid state.

In fact, a recent UN report noted that Israel had established “an apartheid regime that oppresses and dominates the Palestinian people as a whole.”

The report – Israeli Practices towards the Palestinian People and the Question of Apartheid – was commissioned and published by the UN Economic and Social Commission for Western Asia (ESCWA) and launched in Beirut, and urged governments to “support boycott, divestment and sanctions [BDS] activities and respond positively to calls for such initiatives”.

A brief history of Zionism is as follows, according to Britannica:

In the 16th and 17th centuries a number of “messiahs” came forward trying to persuade Jews to “return” to Palestine. The Haskala (“Jewish Enlightenment”) movement of the late 18th century, however, urged Jews to assimilate into Western secular culture. In the early 19th century interest in a return of the Jews to Palestine was kept alive mostly by Christian millenarians. Despite the Haskala, eastern European Jews did not assimilate and, in reaction to tsarist pogroms, formed the Ḥovevei Ẕiyyon (“Lovers of Zion”) to promote the settlement of Jewish farmers and artisans in Palestine.

A political turn was given to Zionism by Theodor Herzl, an Austrian journalist who regarded assimilation as most desirable but, in view of anti-Semitism, impossible to realize. Thus, he argued, if Jews were forced by external pressure to form a nation, they could lead a normal existence only through concentration in one territory. In 1897 Herzl convened the first Zionist Congress at Basel, Switzerland, which drew up the Basel program of the movement, stating that “Zionism strives to create for the Jewish people a home in Palestine secured by public law.

When the Ottoman government refused Herzl’s request for Palestinian autonomy, he found support in Great Britain. In 1903 the British government offered 6,000 square miles (15,500 square km) of uninhabited Uganda for settlement, but the Zionists held out for Palestine.

Upon the outbreak of World War I, political Zionism reasserted itself, and its leadership passed to Russian Jews living in England. Two such Zionists, Chaim Weizmann and Nahum Sokolow, were instrumental in obtaining the Balfour Declaration from Great Britain (November 2, 1917), which promised British support for the creation of a Jewish national home in Palestine. The declaration was included in Britain’s League of Nations mandate over Palestine (1922).

The Balfour Declaration, written in 1917, was an official document from the British Foreign Minister, Lord Balfour, addressed to Lord Rothschild, a leader of the Zionist movement in Britain at the time – and Lord Jacob Rothschild’s uncle.

During the television interview with Rothschild, he revealed new details about the extremely pivotal role his cousin Dorothea de Rothschild played. Rothschild described Dorothea, who was in her teens at the time, as “devoted to Israel,” and said: ‘What she did was crucially important.’”

Rothschild went on to say that Dorothy acted as a conduit between Zionist leader Chaim Weizmann and the British political establishment. Dorothy “told Weizmann how to integrate, how to insert himself into British establishment life, which he learned very quickly,” according to Rothschild.

Rothschild explained that the manner in which the declaration was procured was extraordinary.

“It was the most incredible piece of opportunism,” he reasoned.

“[Weizmann] gets to Balfour,” Rothschild described, “and unbelievably, he persuades Lord Balfour, and Lloyd George, the prime minister, and most of the ministers, that this idea of a national home for Jews should be allowed to take place. I mean it’s so, so unlikely.”

According to former Israeli Ambassador Daniel Taub, the Balfour Declaration “changed the course of history for the Middle East.”

Rothschild said his family at the time was divided on the idea of Israel, noting that some family members “didn’t think it was a good thing that this national home be established there.”

In her book, Against Our Better Judgment: The Hidden History of How the U.S. Was Used to Create Israel, Alison Weir exposed the fact that numerous drafts of the declaration were presented to Zionists in the United States prior to the document being finalized.

Weir’s book notes that one of the primary inducements offered to British leaders to issue the Balfour Declaration was the Zionist claim that they would bring the U.S. into world war I on Britain’s side if the British would promise to enable the Zionist colonization of Palestine.

The deeply intertwined relationship between modern Zionism and the Rothschild banking empire cannot be overstated. Without the Rothschild family’s vast influence and direct assistance, Israel very well may have never been created.

It seems that contrary to popular opinion, Trump isn’t opposing the globalist and Zionists, but rather, operating at the behest of his Zionist billionaire overlords, such as Jacob Rothschild and billionaire casino magnate Sheldon Adelson, to further entrench the state of Israel to the detriment of the surrounding Arab population who are treated as second-class citizens.