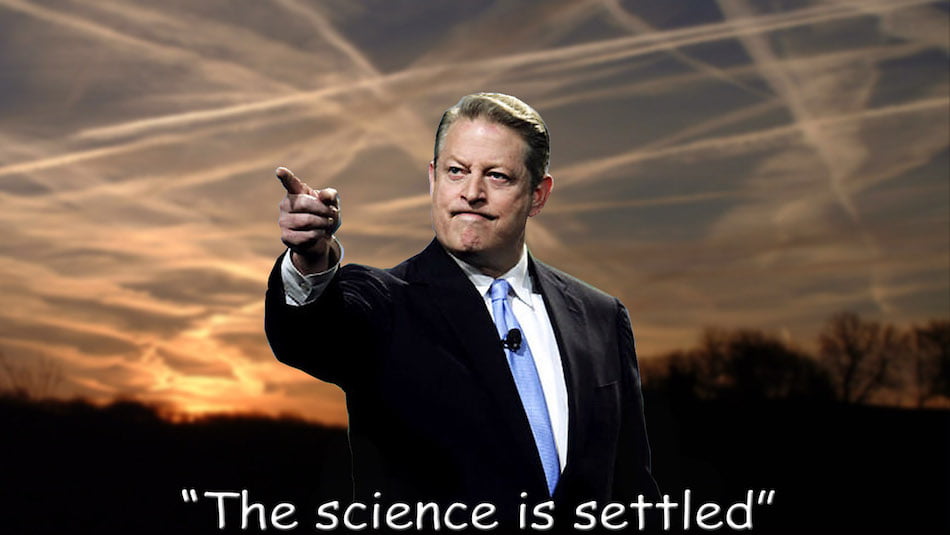 Soon we “celebrate” the 12th anniversary of former Vice President Al Gore’s movie “An Inconvenient Truth” revealing the “grave” threat of global warming. On January 26, 2006 the Washington Post stated Al “believes humanity may have only 10 years left to save the planet from turning into a total frying pan.”

My Tennessee neighbor won an Oscar and Nobel Prize for sounding the alarm in book and film as a Climate Control Caped Crusader.

Al crisscrossed countries waving his arms, passionately declaring, “We can’t wait… We have a planetary emergency… the future of human civilization is at stake! … Global warming  is the greatest challenge we’ve ever faced!” This is no exaggeration.

In an article highlighting his tireless service for humanity, The Washington Post labeled him “the world’s most renowned crusader on climate change.” Wow! And remember he almost became President of the United States were it not for a few “hanging chads” that didn’t go to his column.

President Obama subsequently picked up the “crisis” telling world leaders that “climate change (not Islamic terrorism or skyrocketing, unsustainable debt) is the number one issue facing us today.”

At the recent Global Paris Summit he pushed this agenda with urgency. The cost of his United Nations Global Warming Treaty came in at $12.1 trillion or $484 billion dollars yearly according to Bloomberg.

Al’s efforts made him an environmental hero but took a tragic toll on his marriage. His marriage of 40 years to Tipper ended in a shocking divorce.

Leaving his V. P. office with assets of $2 million, Mr. Gore now has wealth estimated at over $[2]00 million. Al’s movie cost $1million and brought in $50 million.

He hauls in $175,000 speaking fees, is tied to at least fourteen green-tech firms, sits strategically on certain (take a guess) boards, plus benefits from Obama grants and millions in tax breaks. He’s on his way to becoming what one congressional leader called “our first carbon billionaire.”

This hysteria and apocalyptic fear mongering reminds many of the 1970 Earth Day predictions that fizzled like a firecracker:

The good news is that many people are wising up! Because of long standing behavior that is suspect to say the least, multitudes view as con artists multimillionaires like Al Gore, Michael Moore, the Clintons and others who prey on the gullible and get rich off causes, advance their fame and live lavish lifestyles off the backs of the unsuspecting.

Hillary told us they were almost broke leaving the White House and this week she’s on Time magazine’s cover saying, “I know what it’s like to be knocked down,” all the while she and her husband have amassed over $120 million in speaking fees alone.

Patrick Moore, the legendary, past president of Greenpeace says:

“There is no definitive scientific proof through real-world observation that carbon dioxide is responsible for any of the slight warming of global climate which has occurred during the past 300 years.” He rejects the “science is settled” and “the debate is over.”

Recently even the Supreme Court weighed in with an extraordinary rebuke to President Obama’s attempt to control carbon emissions.

This is not to say that we should be unconcerned or uninvolved regarding legitimate environmental concerns.

Christians are compelled to be good stewards of God’s resources and the earth. We should all make a quality decision to reasonably conserve energy (it’s why we keep our thermostat low in winter/high in summer; turn off the faucet while brushing teeth; etc.).

As Christians we seek to obey His directive to care for and develop the earth’s resources while using them wisely and unselfishly (Gen.1:28; Ps.8:4-8), especially to help the poor and underprivileged.

We do not need to succumb to fear by doomsayers and scientists contradicting God’s promise to maintain stability in seasons and oceans (Gen. 8:22; Gen. 9:11; Jer. 5:22).

The Truth About Global Warming: We’re Not Causing It, But We’re PAYING for It

12 years after Al Gore’s “Inconvenient Truth” guilt/fear producing predictions, let’s close by examining just how accurate his “science” proved to be on his way to the bank.

8. Temperature Increases Due to CO2 – no significant rising for over 18 years.

9. Katrina a Foreshadow of the Future – false – past 10 years, no F3 hurricanes; “longest drought ever!”

10. The Earth Would be in a “True Planetary Emergency” Within a Decade Unless Drastic Action Taken to Reduce Greenhouse Gasses – never happened.

Awhile back, the Washington Post stated in an expose’ that, “Al Gore has thrived as a green-tech investor.” Coincidental?

Was it also coincidental that at the recent Climate Summit in Paris, there was a red carpet debut of a dynamic new film “Climate Hustle” just down the street?

This groundbreaking film exposing the junk science of global warming will be seen on Capitol Hill, in theaters, then on DVD soon. Check it out: Climate Hustle.

Another excellent and humorous documentary I’ve enjoyed on this topic is “An Inconsistent Truth” by talk show host Phil Valentine of Nashville. It’s fascinating when Phil goes to Al’s gated home! Check it out on YouTube for a hearty laugh.

It’s films like the above and videos like those being seen at Bullseye Challenge (along with the Bullseye book) that are dispelling darkness by truth that’s only inconvenient to those refusing to listen.