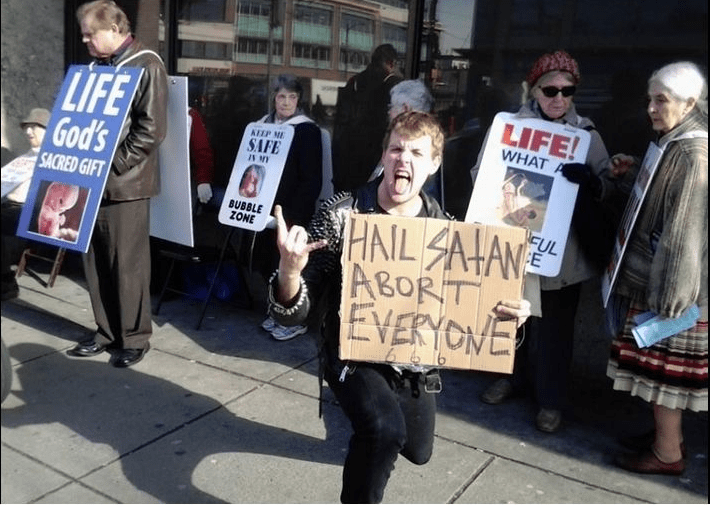 The Missouri Supreme Court will hear a Satanist’s argument this week against a state informed consent law that she alleges violates her religious freedom.

NBC News reports the court is scheduled to hear the Satanic Temple’s appeal Tuesday. A federal judge threw out the case in 2016, saying the plaintiff, “Mary Doe,” a member of the Satanic Temple, failed to show “sufficiently concrete injuries.”

The Satanic Temple alleges that Missouri trampled on Doe’s religious rights by requiring that she undergo an ultrasound and receive information about her unborn baby’s development, abortion risks and alternatives to abortion. The state law also requires that a woman take 72 hours to consider the information before going through with the abortion.

“Missouri’s state-mandated informed consent booklets explicitly say that life begins at conception, which is a nonmedical religious viewpoint that many people disagree with,” said Satanic Temple leader Jex Blackmore in a statement Monday. “Forcing women to read this information and then wait 72-hours to consider the State’s opinion is a clear violation of the Establishment Clause.”

However, state attorneys said the Satanists’ case is weak.

“Even if Doe has alleged a restriction on free exercise (of religion), the Informed Consent Law clearly serves compelling state interests and is not unduly restrictive on Doe’s asserted exercise of religion,” they said in court papers on Sept. 21.

Here’s more from the report:

Doe advised the doctors at the St. Louis clinic that “she adheres to principles of the Satanic temple and has sincerely held religious beliefs different from the information in the informed consent booklet,” the case summary states.

Jex Blackmore, a spokeswoman for the Satanic Temple, said the woman’s religious rights were ignored.

“The State has essentially established a religious indoctrination program intended to push a single ideological viewpoint,” Blackmore said in a statement. “The law is intended to punish women who disagree with this opinion.”

According to the Satanists, informed consent laws violate two core tenants of their beliefs: First, “One’s body is inviolable, subject to one’s own will alone,” and, second, “Beliefs should conform to our best scientific understanding of the world. We should take care never to distort scientific facts to fit our beliefs.”

However, the Missouri informed consent law is based on scientific facts, not Christian, Jewish, Buddhist or any other religion’s beliefs. Scientifically, it is well established that a unique new human life comes into being at the moment of conception. Likewise, the information women receive as part of informed consent — facts about their unborn baby’s development and abortion risks – also are backed up by strong scientific research.

The Satanists have attacked other state informed consent laws, too. In 2015, Blackmore wrote a blog about aborting her unborn baby to attack abortion regulations in Michigan. She called her unborn baby’s abortion death “surreal,” and received media attention for her writing.

The Satanic Temple also mercilessly mocks and attempts to intimidate peaceful pro-life sidewalk counselors through gruesome protests. In April 2016, pro-life advocates outside of a Detroit, Michigan Planned Parenthood faced a disturbing scene when a group from the Satanic Temple arrived to counter-protest wearing baby masks and carrying whips. They held a similar protest on Good Friday in 2017.

Breitbart described the Satanic Temple’s actions as a “pro-abortion crusade to come to the aid of America’s largest abortion provider,” Planned Parenthood.