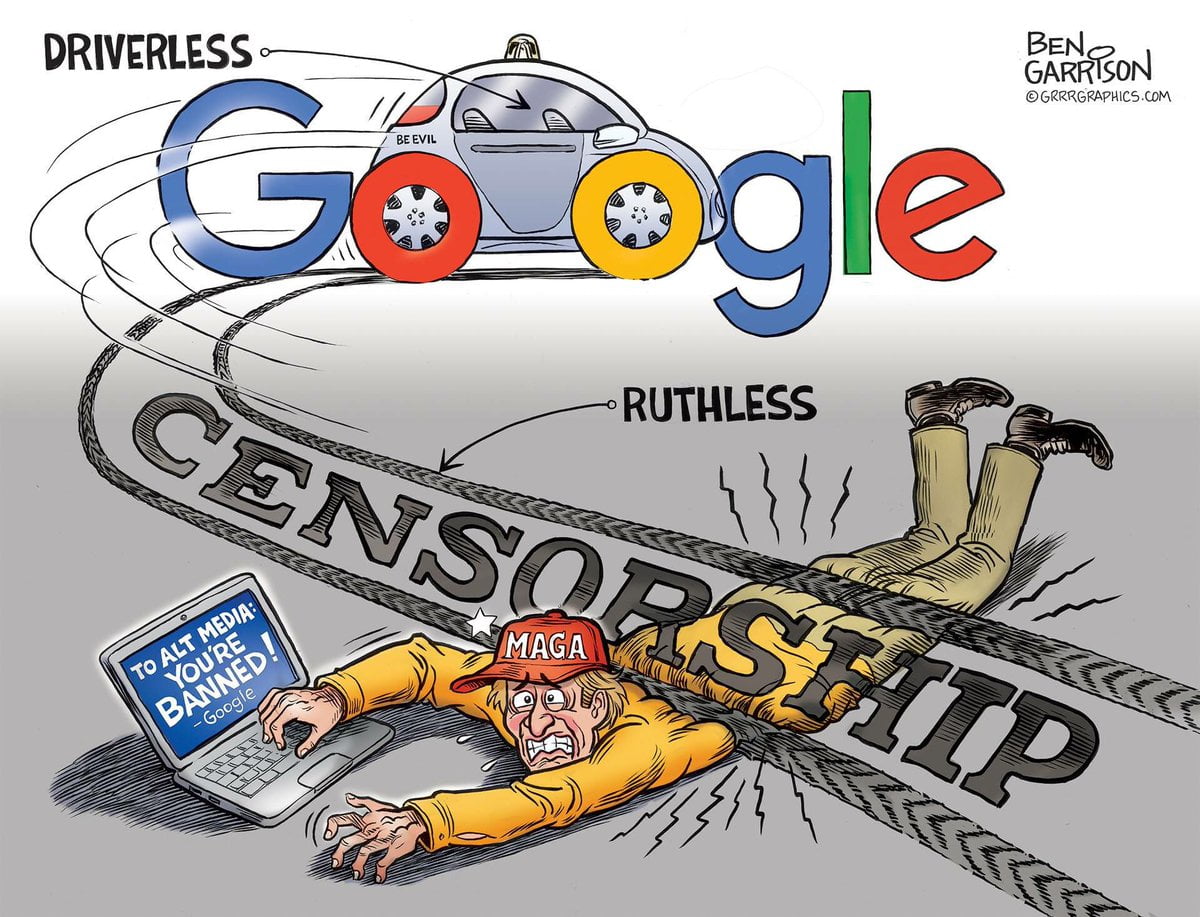 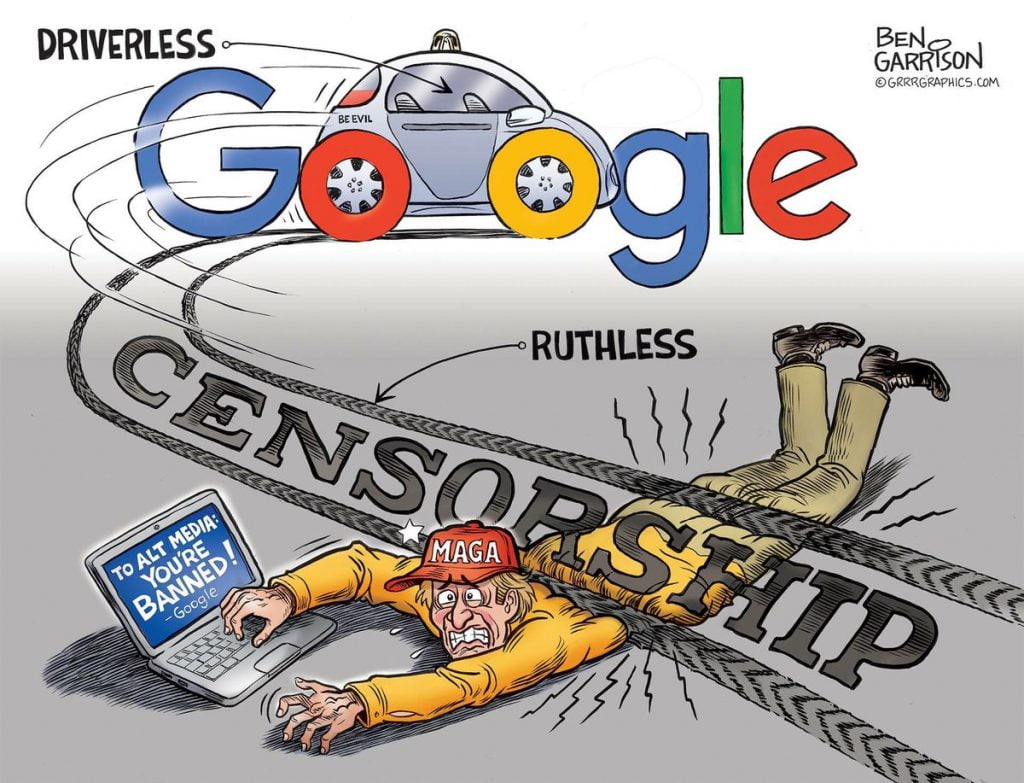 By the middle of 2017 we knew that the attacks against Independent Media had a good chance to destroy and bankrupt many Independent Media websites, as we have consistently documented how social media platforms were shadow-banning and censoring conservatives, specifically those that supported Donald Trump against Hillary Clinton in the 2016 general presidential election cycle.

Google’s video platform YouTube was and still is demonetizing conservative political content, and putting entire channels on restricted mode, meaning anyone that had their settings set to restricted could not even see or search video from those content creators. Our video channel was one of those that saw all our videos disappeared in restricted mode, despite no cursing, nudity, or any other actionthat violates YouTube’s terms of service.

ANP knew it was going to hit critical mass simply by watching ad revenue dwindle away from the Google Adsense program, which many use to be able to afford to run maintain their websites, including paying the bills so website owners can afford the time and research needed to produce original material. Google allows three ads per page, and as traffic in a non-presidential election year normally drops between 10 and 20 percent, yet the revenue dropped by over 60 percent, plus all video revenue disappeared, paid by Google as well, it became clear it wasn’t just traffic Google was attempting to limit, but they were somehow paying less for the ads that were being served.

Breitbart News has been given physical proof that Google employees are targeting them by threatening advertisers, telling them that if they allow their ads on Breitbart, they will harm their “brand safety.” These employees have gone as far as to collude with a group called “Sleeping Giants” who set up a campaign to encourage their users to harass Breitbart advertisers until they agree to no longer advertise or promote the website.

Breitbart News has obtained a screenshot (withheld to protect our source) that shows Google ad account manager Aidan Wilks advising another company – a client of Google’s – that advertising on Breitbart may impact their “brand safety.”

In the screenshot, Wilks can be seen linking Google’s client to the website of Sleeping Giants, a far-left organization that has repeatedly targeted Breitbart and other conservative-leaning news sites with false claims of racism and bigotry.

The screenshot also shows Matthew Rivard, another employee at Google, advising colleagues that Wilks’ message was a “nice template” for those who wished to “call out” the issue to clients. Rivard recommends that the message should be repeated for “other key accounts.”

Harmeet Dhillon, the Republican national committeewoman for the California GOP and attorney for James Damore, who has also seen the screenshot, said that other Google AdSense users should be concerned about secret blacklisting.

“This communication from Google’s advertising department raises troubling questions about whether the company’s ideological bias extends beyond the employment claims covered in our lawsuit, to Google’s business practices toward AdWords publisher users as well,” said Dhillon.

“If there are indeed concerted efforts at Google to undermine the advertising revenue of disfavored publishers (an allegation YouTube is already facing in court through its abrupt demonetization of Prager University videos), then this conduct may give rise to additional legal claims. At a minimum, AdSense users may question whether they are being targeted for secret blacklisting as described here.”

That explains so much. If Google is threatening “brand safety” and certain employees are actively working with the far left groups to force the higher paying ads to stop advertising on Independent Media websites, then it stands to reason that traffic in a non-presidential election year can drop the standard 10-20 percent, yet revenue would tank by 60-70 percent, threatening to knock a lot of us right out of business.

The bad news is, they are succeeding as we have recently reported, two established conservative sites, Red Flag News, and Right Wing News, have now shuttered, citing the censorship by Google and social media.

Here is how Sleeping Giants has targeted Breitbart (and others): 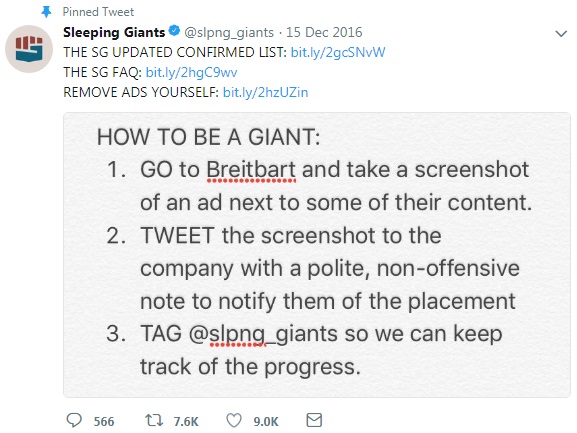 Then their 137K followers start targeting those advertisers, as can be seen in their Twitter feed, harassing them until they stop advertising, and Google employees are actively promoting and linking their advertisers to the Sleeping Giants campaign to help them censor and demonetize Breitbart.

That is not the only way Google is targeting Breitbart and other conservative-leaning, Independent Media, sites either, as they are also keeping a “spreadsheet,” and as Bretibart states “They have people trawling each article on the site [Breitbart] to see if they can find comments that might violate their policies in order to justify not trafficking ads.”

Breitbart may be big enough to withstand this type of campaign, but smaller websites cannot.

Many sites, including ANP, started looking for other ad services to supplement income, to replace other ads, and found there were services out there geared toward Independent Media, run by people that believed in free speech and were vehemently opposed to big tech censorship. Many of us also added donation options, including ANP, LifeSite News, Campus Reform, Government Slaves, Daily Signal and Daily Caller, just to name a few.

The ultimate goal of looking for alternatives to Google Adsense is so that Independent Media can survive without Google.

The pro-life website LifeSite News, in reporting on the Breitbart confirmation of the secret blacklisting being done by leftist Google employees, offers the following suggestion: “With that wide-open, subjective description it would appear that most conservative websites should prepare to eventually be blacklisted by Google and therefore begin now to seek alternative sources of ad revenue.”

ANP heard of Commodity Ad Network from SGT Report before they launched and after reading why they were creating an ad networkwhich they call “a disruptive ad network of creative minds who speak out against the powers that be,” specifically in support of the “alt media message,” we did a little research and communicated with them and decided if someone was going to put so much effort and financial resources into helping Independent Media stay alive, we were going to jump onboard. That decision was also based on the fact that someone well known, and trusted, in the Independent Media community, Steve St. Angelo, from SRS Rocco Report is part of their team.

We rolled out one ad per page, slapped it above the fold, and they began showing around February 1, 2018. Rather than making website owners wait for a net 45, net 60 or net 90 day turnover for payment, they are set up to pay the 15th of the following month, and if the dashboard data is anything to go by, their one ad will nearly triple the revenue Google is now bringing Independent Media websites in each month with three ads.

Their blog also lists all the sites that jumped on board to give them a chance as they were trying to create something to help all Independent Media, with links to each, and their Commodity Ad Network website also scrolls each website across the screen, with links, under their “Alt-Media Websites Participating in the Commodity Ad Network,” category.

It gets better. Not only are they going toe-to-toe with Google on advertising, but their next stage will be creating their own search engine focused on alt-media content. Then they plan to set up a social media network and a video platform, stating “Content creators will be able to set up their own channels and publish videos without us restricting their free speech.”

We will use our adserver platform to serve ads on all of these platforms as well. All our services will follow our philosophy of 100% privacy and zero censorship.

When we started ANP, we had people that helped us, like Steve Quayle who offered guidance, answered questions, helped us launch and links to us regularly, and Mike Adams of Natural News that linked to us, quoted us and advertised with us after Google, social media and big tech kicked their censorship campaigns after the presidential election into high gear, and readers that have stuck with us since the very beginning, so it stands to reason that when a service like Commodity Ad Network launches, with the sole goal of helping to mitigate the financial hardships that censorship has caused so many of us, that we would jump on board with both feet and try to help make it a success.

Please, reach out to your favorite alt-media websites not listed above and ask them to consider joining the Commodity Ad Network — A Network of the Good Guys, for the Good Guys.

You can forward them our application form link and our short intro video.

Similarly, if you know of companies whose products and services might be useful to visitors of alt-media websites, please, forward them our advertiser application form and our short intro video.

The more the merrier!

Breitbart has now been able to confirm what many of us already knew just by looking at our Google Adsense dashboard, that leftist employees within the company are actively targeting conservative Independent Media websites and secretly blacklisting them, while targeting advertisers and threatening their “brand safety” if they allow their ads to show up on the IM websites. It is more important than ever for every single person that reads these websites, everyone that runs an Independent/Alt media website and advertisers that want their ads shown to everyone, not just those leftist employees at Google “approve” of, to unite, and help each other.

Otherwise, all that will be available will be what the mainstream media wants you to know.

Note to Readers– If we make it through March when we start seeing the revenue generated by the new ad network, we may just have a chance to turn big techs’ bias back against them and come through this stronger, louder and more powerful, together. February 2018 has been the most brutal month yet due to the censorship we have been battling against this past year, so any extra readers may be able to spare for donations is greatly appreciated.