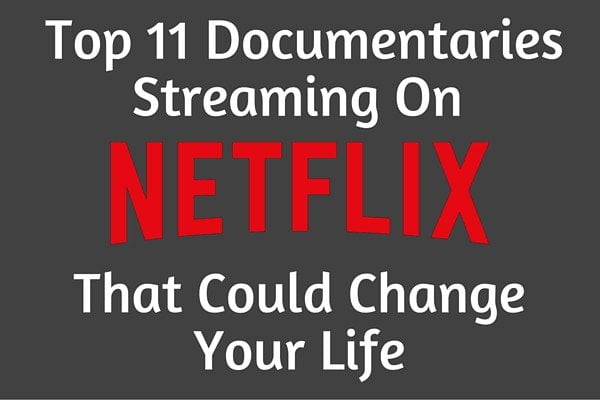 Netflix has become increasingly popular over the last few years and for good reason; viewers have the choice to watch what they want, when they want it, all without being bombarded with endless, mind-numbing advertisements.

Sure, the service has the potential to keep us glued to the couch, but at least it provides the opportunity to learn quite a lot while being there.

In fact, many of the documentaries available to watch on Netflix now have the potential to change your life. Without further adieu:

*Included are the original synopses for the documentaries and links to their websites. Note that a lot of these are related to health, because changing your diet and lifestyle could very literally save your life!

“Hungry For Change exposes shocking secrets the diet, weight loss and food industry don’t want you to know about; deceptive strategies designed to keep you coming back for more. Find out what’s keeping you from having the body and health you deserve and how to escape the diet trap forever.”

“Everything we’ve been told about food and exercise for the past 30 years is dead wrong. FED UP is the film the food industry doesn’t want you to see.

“From Katie Couric, Laurie David (Oscar winning producer of AN INCONVENIENT TRUTH) and director Stephanie Soechtig, FED UP will change the way you eat forever.”

“TINY is a documentary about home, and how we find it. The film follows one couple’s attempt to build a “tiny house” from scratch, and profiles other families who have downsized their lives into homes smaller than the average parking space.

“Through homes stripped down to their essentials, the film raises questions about good design, the nature of home, and the changing American Dream.”

“‘Family Guy’ creator Seth MacFarlane, in a departure from the type of material he is best known for, pays homage to Carl Sagan’s award-winning and iconic ‘Cosmos’ with this docu-series. Through stories of humankind’s quest for knowledge, viewers travel across the universe.

“100 pounds overweight, loaded up on steroids and suffering from a debilitating autoimmune disease, Joe Cross is at the end of his rope and the end of his hope.

“In the mirror he saw a 310lb man whose gut was bigger than a beach ball and a path laid out before him that wouldn’t end well — with one foot already in the grave, the other wasn’t far behind.

“Forks Over Knives examines the profound claim that most, if not all, of the degenerative diseases that afflict us can be controlled, or even reversed, by rejecting our present menu of animal-based and processed foods.

“The major storyline in the film traces the personal journeys of a pair of pioneering yet under-appreciated researchers, Dr. T. Colin Campbell and Dr. Caldwell Esselstyn.”

“Cowspiracy: The Sustainability Secret is a groundbreaking feature-length environmental documentary following intrepid filmmaker Kip Andersen as he uncovers the most destructive industry facing the planet today – and investigates why the world’s leading environmental organizations are too afraid to talk about it.”

“911: In Plane Site: Director’s Cut is a 2004 documentary which promotes 9/11 conspiracy theories. Photographs and video footage from the September 11 attacks are presented and the documentary claims that the public was not given all of the facts surrounding the terrorist attack.”

There wasn’t much of a synopsis available for this movie so I’ll share my own experience with it instead. Personally, this was one of the first films I have seen which gave me some answers and opened my eyes to the true nature of our world.

It was as shocking as it was comforting to me, as it explained this feeling I had had inside for so long, where I just felt as though things weren’t as they seem.

It catapulted me into my “awakening” so to speak, and if you have not seen it yet, I highly recommend it. Zeitgeist rips apart the widely accepted beliefs about religion, the 9/11 attacks, and the financial system, and offers a new way to view these things.

“This is the movie that will change your attitude about fuel forever. PUMP is an inspiring, eye-opening documentary that tells the story of America’s addiction to oil, from Standard Oil’s illegal tactics to the monopoly oil companies enjoy today.

“The film explains clearly and simply how we can end this monopoly — and finally win choice at the pump.”

“The Human Experiment lifts the veil on the shocking reality that thousands of untested chemicals are in our everyday products, our homes and inside of us. Simultaneously, the prevalence of many diseases continues to rise.

“From Oscar® winner Sean Penn and Emmy® winning journalists Dana Nachman and Don Hardy, The Human Experiment tells the personal stories of people who believe their lives have been affected by chemicals and takes viewers to the front lines as activists go head-to-head with the powerful and well-funded chemical industry. These activists bring to light a corrupt system that’s been hidden from consumers… until now.”