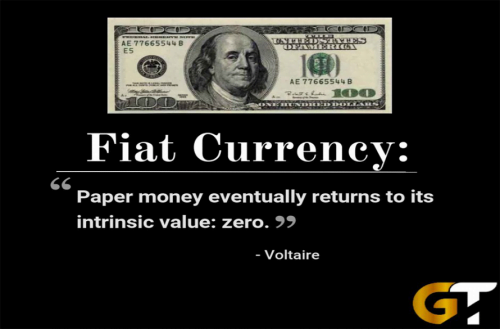 Paper currency has led to the collapse of almost every economy that has tried to institute a fiat currency to trade for goods and services.It’s not looking very well for the once mighty dollar, either.

Throughout history, attempts at using fiat currency, even today, has failed. When the government prints fiat money that isn’t backed by any value, disaster inevitably ensues. Still, the long history of failed fiat currency is being ignored by today’s money printers.

At the start of the first century, the Roman denarius was a coin containing approximately 94 percent real silver. By the end of the century, the amount of silver was reduced to 85 percent. Devaluing the denarius meant Nero and succeeding emperors could pay off their bills more easily while becoming richer. A hundred years later, the denarius contained less than 50 percent silver, and in 244 A.D., Emperor Philip the Arab devalued the currency down to 0.05 percent silver content. By the time the Roman empire collapsed, the denarius was made of 0.02 percent silver, and it became useless as a currency.

Copper backed China’s initial paper currency. When copper became scarce, China began to make iron coins. The iron currency became overissued and soon became devalued. By the 11th century, a Szechuan bank issued another paper currency that could be exchanged for valuable goods such as rare metals or silk. Continuous war with neighboring Mongols caused economic inflation. China lost the war to Genghis Khan, who was too busy with other conquests to take much interest in China. Genghis’ grandson Kublai brought China and its finances under Mongolian control. Kublai used fiat currency for the vast China trade, including trade with Marco Polo. Kublai simply continued to print vast amounts of money as he continued his marauding and conquering. But infusing the economy with worthless monopoly money ruined many and chaos became the norm.

France has an interesting history with paper money. It may be the only country to face economic collapse not once, not twice, but three times by flooding the country with fiat currency.

High-living Sun King Louis XIV left a debt of 3 billion livres for his successor to deal with. Louis XV desperately needed incoming tax payments and demanded these be paid in paper currency. Predictably, the paper currency was quickly overprinted and became worthless.

In the 18th century, France began another attempt at printing paper currency called assignats. By the end of the century, the assignat suffered 13,000 percent inflation. Napoleon rode to the rescue by instituting the gold franc, which stabilized France’s erratic currency. One would think the French might have seen a connection between the stable economy and gold-backed currency. No such luck.

France reverted to paper currency in the 1930s, the paper franc. In just more than a decade, the fiat franc became devalued by 99 percent. France’s third attempt at printing worthless monopoly money proved to be a dismal failure.

Following WWI, Germany’s Weimar Republic faced historic debts. So, Germany put the printing presses to work – a total of 133 printing companies were kept busy. The mark became more than worthless. It was used to heat furnaces. Burning the paper currency to keep warm was more efficient than using it for trade.

A wheel barrel became a wallet.

Throughout the 20th century, many other countries flooded their economy with fiat currency – and collapsed as a result. The direct correlation between government interference with money and the devaluation of currency seems to escape many. 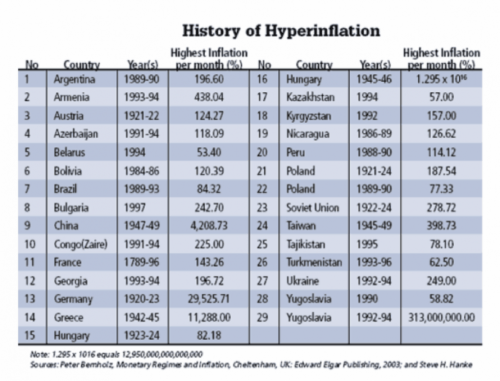 Has the US learned anything about fiat money? The Colonies happily jumped on the fiat currency bandwagon and began flooding the land with their own paper money. When these currencies quickly became overissued, they became – surprise! – devalued. Like the marc to come a few centuries later, colonial currency made for excellent bathroom tissue. The Revolutionary War was financed with a paper currency called the continental. It, too, crashed on a grand scale. This, finally, brought about some healthy American distrust for fiat currency. The US dollar was now backed by actual gold and saw the most splendid and richest economic growth in history. People came from all parts of the globe to be a part of such a success story.

As if on schedule, the Federal Reserve appeared. Currency once again fell under the aegis of government control and manipulation. In 1933, President Roosevelt made ownership of gold illegal. The ties between the US dollar and the country’s gold reserves were severed gradually until President Nixon eliminated the gold standard entirely in 1971. The once mighty US dollar instantly turned into fiat currency. This was followed by a decade of disastrous inflation.

The US has followed the historical pattern of paper money. The government is currently printing dollars with abandon to pay off its record debt (sound like a familiar refrain?). Following a long historical precedence, the US dollar is losing value at an alarming rate as we head into a period of high inflation.

As history has demonstrated, inflation is a guaranteed devaluer of currency. Following WWII, Greece saw an increase in inflation of 18 percent per day. The country’s deficit tripled within a year. And then things got really bad. An invasion by the Axis powers saw income plummet by 70 percent. Like so many other countries in the past, Greece started printing worthless currency and experienced one of the worse hyperinflations in history.

As previously stated, Germany’s Weimar Republic faced unprecedented debt in the wake of WWI. No country would accept its worthless mark as repayment, forcing Germany to sell off marks for other foreign currencies at any price. This lead to Germany’s famous hyperinflation of 29,500 percent.

Zimbabwe is famous for its 100 trillion-dollar note during its period of catastrophic hyperinflation. Prices doubled daily as Zimbabwe faced hyperinflation of 79 billion percent in 2008. A loaf of bread was priced at 35 million Zimbabwe dollars. Government intervention can invariably be found as the source of any hyperinflation.

There is no escaping history. Paper money and out-of-control national debts have always devalued the currency and caused massive inflation. The US dollar remains on the cusp. It is anyone’s guess which way it will go. But the roadmap to a financial disaster was printed thousands of years ago. Is anyone paying attention?

Authored by Alex Deluce via GoldTelegraph.com,