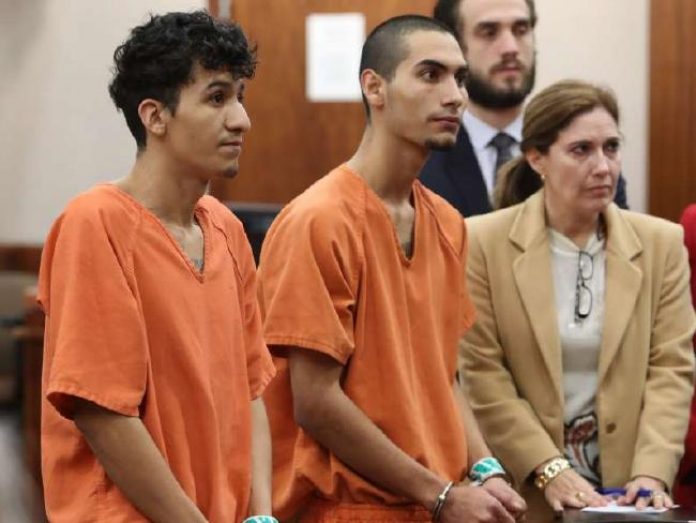 MS-13, the notorious street gang dubbed “the world’s most feared” is allegedly sacrificing underage American girls in “Satanic rituals”, according to US police.

More than a dozen members of the LA-based, Salvadoran gang Mara Salvatrucha, commonly known as MS-13, have been charged in connection with at least eight murders, many involving high school students, across the US since last month.

While MS-13 has long been associated with devil worship and use plenty of Satanic symbolism, including its trademark “devil’s horns” hand signal, it is the first time evidence of members’ alleged participation in Satanic murders has been presented in the US.

In recent days, horror details of MS-13 crimes have been revealed in police documents tendered in two separate court cases underway in New York and Texas.

Two El Salvadoran illegal immigrants, Miguel Alvarez-Flores, 22, and Diego Hernandez-Rivera, 18, have been indicted in the alleged murder of a 15-year-old girl as part of a Satanic ritual as well as the kidnap, torture and rape of two other teens. 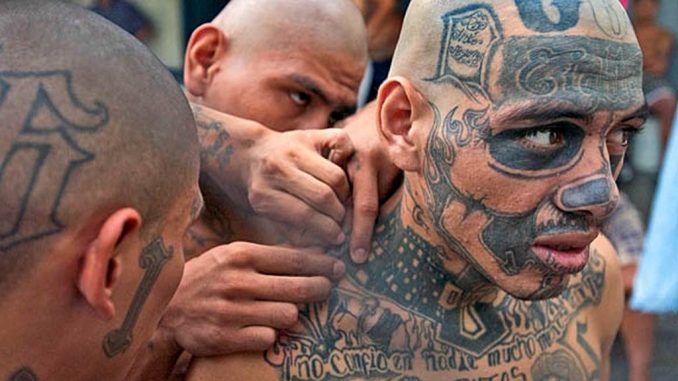 Northern Star reports: A 14-year-old girl who was allegedly held hostage in a Houston apartment by purported MS-13 leader Alvarez-Flores, his co-accused Hernandez-Rivera and four other gang members in January, is at the centre of the prosecution.

The girl told police she was plied with alcohol and drugs, sexually assaulted by a gang member called “Flaco” and held down while Alvarez-Flores tattooed an image of the Grim Reaper stretching from her knee to her foot, according to court documents cited by ABC 13.

MS-13 gang members are being removed by our Great ICE and Border Patrol Agents by the thousands, but these killers come back in from El Salvador, and through Mexico, like water. El Salvador just takes our money, and Mexico must help MORE with this problem. We need The Wall!

She told police that during her 18 days in captivity, she met another hostage, a young girl called “Genesis”, whom she claimed was later murdered for insulting a Satanic shrine Alvarez-Florez had set up.

Alvarez-Flores then made a show of appeasing Satan by placing a lit cigarette on a Satanic statue at the centre of the shrine before declaring that “material” objects no longer satisfied Satan. Instead, “the Beast wants another soul”, he said, according to police documents.

The 14-year-old claimed when she woke up the following morning, Genesis had vanished.

On February 16, the shot and tortured body of female believed to be aged between 15 and 25 was found.

Police struggled to identify her for almost two weeks before confirming her remains belonged to Genesis Conejo, a 15-year-old reported missing by her family, who believed she may have run off with an older man.

One night during her confinement, she observed an incident where Genesis made an outburst against a shrine dedicated to the gang members’ satanic beliefs,” the prosecutor said.

In the courtroom, Hernandez-Rivera brushed his nose.

“Diabolico (Alvarez-Flores) was offended at the outburst,” the prosecutor said. He approached the statue and offered it a cigarette. Then he walked back to the other gang members.

“The beast did not want a material offering, but wanted a soul,” Alvarez-Flores said, according to the prosecutor.

When the girl next woke, Genesis was gone.

She reappeared on the morning of February 16, dead in the middle of a street near Houston’s Chinatown area – no ID, a ring of little elephants around one finger.

She had a bullet hole in her head, and another in her chest, both of which appeared to have been fired at close range, police said.

It took detectives some time to piece together what happened. But last week SWAT officers raided the apartment and arrested Alvarez-Flores and Hernandez-Rivera – both of whom allegedly admitted involvement in the girl’s death.

“Prepare yourself; it is your turn,” Alvarez-Flores told Hernandez-Rivera after he returned from the shrine, prosecutors allege. “He knew this was an order by his leader to kill” Genesis.

A group of gang members then drove off with Genesis, telling her they were going to meet a marijuana dealer. Instead, they pulled over and instructed the teen to sit on the grass on the side of the road.

Police allege Alvarez-Flores pulled out a pistol and waved it at Hernandez-Rivera, who took it and shot the girl.

In a separate case, 10 MS-13 members have been indicted over seven murders, including the slaying of two young girls, in New York’s Long Island.

Best friends Nisa Mickens, 15, and Kayla Cuevas, 16, were beaten with baseball bats and hacked with a machete during an attack that began when gang members spotted them walking together in Brentwood.

The attack was allegedly in retaliation for derogatory comments Kayla had made about MS-13’s presence at her high school.

The accused men – all illegal immigrants from El Salvador or Honduras, and are among 13 people charged with crimes including racketeering and multiple counts of conspiracy to murder.

One of them was deported to El Salvador back in 2010 and sneaked back into the US by July 14, 2014, when he allegedly murdered Jose Lainez-Murcia, with whom he had worked at a landscaping company in Kings Park.

“Today, in collaboration with the FBI and the United States Attorney’s Office, we have delivered on that promise.”

Elmer Lopez and German Cruz and two other fugitives have been charged with the murder of Peña-Hernandez, who law enforcement said was a MS-13 member and killed because he was suspected of violating gang rules.

A third juvenile MS-13 member has been charged with the Peña-Hernandez murder. Police say victim was killed in June 2016, but his badly decomposed remains were not recovered until October.

Police also found the bodies of 19-year-old Oscar Acosta and 15-year-old Miguel Garcia-Moran in a remote industrial area of the town.

Acosta had been missing since May, and Garcia-Moran vanished in last February. None of the suspects indicted Thursday have been charged with their murders.

Law enforcement officials have said MS-13 is the largest gang on Long Island with Suffolk County “cliques” concentrated in the villages of Brentwood, Huntington, Copiague, Farmingdale, and Islip. The gang has been blamed for 30 other killings on Long Island since 2010.

“For far too long, MS-13 has been meting out their own version of the death penalty,” New York Attorney Robert Capers said.

Since the killings, Suffolk County police have arrested more than 125 suspected MS-13 gang members in Brentwood and elsewhere.