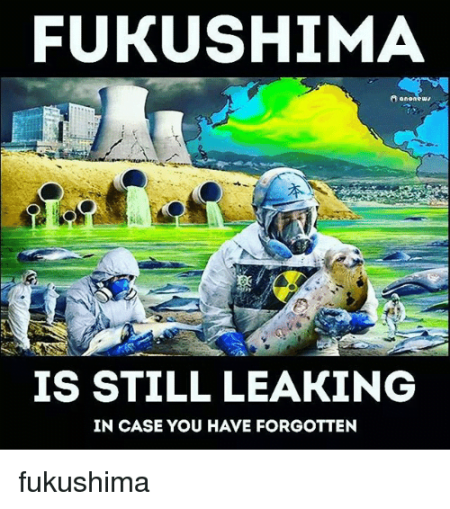 Very sobering report from a patriot Youtuber collecting shocking information on the Fukushima disaster in the Pacific!  It’s far worse than you know!  This is a humanity killer and it’s all because of greed!   Fukushima will still be leaking highly toxic water into the Pacific until Jesus comes back!

The sad part about all this is we had Tesla technology for 100 years that would have eliminated the need for a single nuclear power plant on the Earth!  But the satanic forces that run the system, couldn’t have free or nearly free power for everybody so they rammed nuclear power down our throats and said how great it was going to be!   They loved nuclear power because it cost billions to produce a nuclear power plant plus they all leaked and killed the population so they got a twofer.

Well they killed our planet people, most of us just don’t realize it yet.  The Pacific ocean is dying and will accelerate the death spiral in the years to come.  Not one word of this will be on the fake news on your TVs.  They want you to eat the radioactive tuna and sushi!  The more they stay silent and the more you eat the radioactive fish, the sooner you die which is their goal.  They told you their goal of only 500 million on the Earth.  It’s carved on the Georgia Guidestones.    Oh and believe me everything coming out of the Pacific is all radioactive!  It’s not going to kill you right away of course but it’s cumulative.  The more you eat the more problems for you down the road.  If you’re 95 already then go for it I guess but if you’d like to stick around for a few decades you need to be smart about it!   Listen to what a nuclear expert said who measured the radiation in Canadian waters just two months after the disaster on March 11, 2011 where multiple nuclear reactors melted down.“While the debris started showing up a while ago, the stuff that had the potential to be really sinister, such as radioactive element cesium-137, which was found last week off the coast of British Columbia, is just now arriving. The ocean around Fukushima was originally contaminated with 50 million times the normal amount of cesium-137. Yet when Buesseler arrived at the site with his research team two months after the initial meltdown, he found the ocean had diluted it to just 100,000 times the normal amount. While exposure to high concentrations of cesium-137 can increase cancer risks and even cause burns or death, it’s a number that sounds scarier than it actually is.

“At that point, it was certainly safe to be there,” he says, smiling slightly through a red beard that shows signs of graying. “You could swim in those waters, but you probably don’t want to eat the fish.”

So two months after the event, experts are already telling you NOT to eat the fish!  But now it’s far more radioactive in the Pacific because we are 7 years into this disaster!  Every day 300 more tons of radioactive water go into the Pacific!  So if you love Sushi, you really need to think hard about it.   Do you really want to keep eating the fish from the Pacific when an expert was telling you to not eat it 7 years ago and it’s far worse now!  I’m sorry for the Sushi restaurants but you’re in a dead end business!   You’re customers are going to start dying or waking up at some point!

The situation from Fukushima is so bad that the Fake News and our lying government won’t even dare mention it!  Anderson Cooper and 60 Minutes has all the time in the world to talk about strippers but not one second to talk about our oceans dying due to Fukushima!  Nope, those traitors to humanity can’t even give you a half hearted warning!   But you can be sure all the evil ones who know the truth are avoiding eating anything coming out of the Pacific.  They make sure we eat it with no warnings!  They are making money killing us with the stuff in fact because their companies put it on your table!

In the video above you’ll hear a fisherman literally freaking out talking about Chinook salmon are coming in less than 1% than normal!  This means certain doom of the ecosystem.  Killer whales are starving to death off California right now because they have no salmon to eat!  They are eating their young in some cases because they are desperate!

In the book, “No Immediate Danger: Prognosis for a Radioactive Earth”, Rosalie Bertell says the following.  She knows the truth!

“Should the public discover the true health costs of nuclear pollution, a cry would rise from all parts of the world and people would refuse to cooperate passively with their own death.”

Please spread this important information using the share buttons at the top!  Nothing is more important than warning your fellow man.  The traitors in the fake news will be responsible for killing millions because of their silence!   It takes a special kind of evil like an Anderson Cooper to trade a paycheck for being a traitor to humanity!  Have fun in hell Anderson.  You’re not going to think you’re so cute and funny when you get there.  Better wake up!