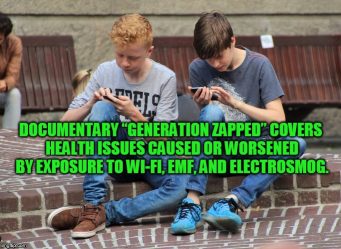 Generation Zapped was produced by filmmaker Sabine El Gemayel.  It reveals the science behind the effects of increasing wireless (Wi-Fi) exposure on humans — particularly children – due to the implementation of Wi-Fi in schools and everywhere else.

Last week, Josh de Sol (documentary filmmaker and activist) interviewed Sabine about making the film, the impact it’s having on viewers, and the challenges faced by all activists.

Over the years, writers for Activist Post, Natural Blaze, and many other publications have published countless in-depth articles about the biological and environmental effects of increasing sources of Wi-Fi, EMF, and Electrosmog in the world.

Broadcast news stations, elected officials, medical professionals, and more have provided warnings over the years as well.  Examples include:

Unfortunately, The Telecom Industry (aka Big Wireless) – with the assistance of many elected officials and government employees – has been able to keep the American public divided and confused about harm from exposure to wireless technology.  Impeccably and expensively crafted marketing campaigns make technology seem like it operates via magic.  In other parts of the world, they have been publicly acknowledging concerns and taking more precautions for several years already.

“Big Wireless” has been compared to “Big Tobacco” and rightfully so.  The comparison may put it all into perspective for those who have lived through the reign of “Big Tobacco.” Unfortunately, younger generations are growing up not knowing to question the safety of new technology.  Of course, why would they when most adults continue to endorse and provide it to them?

Please consider hosting a screening of Generation Zapped in your community.