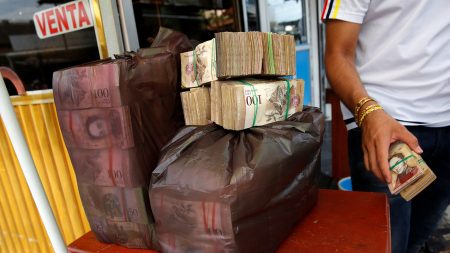 Venezuela is facing one of the worst hyperinflationary crises in modern history, according to the International Monetary Fund (IMF).

It expects the country’s economy to contract by 18 percent this year amid falling oil production – the third consecutive year of double-digit declines, and three points worse than projected in May.

“We are projecting a surge in inflation to 1,000,000 percent by end-2018 to signal that the situation in Venezuela is similar to that in Germany in 1923 or Zimbabwe in the late 2000s,” said Alejandro Werner, head of the IMF’s Western Hemisphere Department.

Venezuela will refine gold in Turkey to protect reserves from US sanctions https://t.co/WWMFVSVCib pic.twitter.com/Nt8SBfPDQK

He also pointed to “economic distortions,” including printing money to finance the government.

“We expect the government to continue to run wide fiscal deficits financed entirely by an expansion in base money, which will continue to fuel an acceleration of inflation as money demand continues to collapse,” said Werner.

One million Venezuelan bolivar is today worth just over $8.

According to Werner, the fact that tens of thousands of Venezuelans have fled the country to escape the crisis will have an impact on neighboring economies.

OPEC data shows Venezuelan oil production crashed to a new 30-year low of 1.5 million barrels a day in June, even though the country has the world’s largest reserves of crude. Venezuela earns 96 percent of its revenue through oil sales.

President Nicolas Maduro says the country is the victim of an “economic war” waged by the United States. In February, he launched the so-called petro digital currency backed by the concrete assets of Venezuela’s oil and other natural resources. It was launched explicitly to circumvent US sanctions against state oil company PDVSA. Maduro has also announced another virtual token, the ‘petro oro,’ which will be backed by the country’s precious metals.