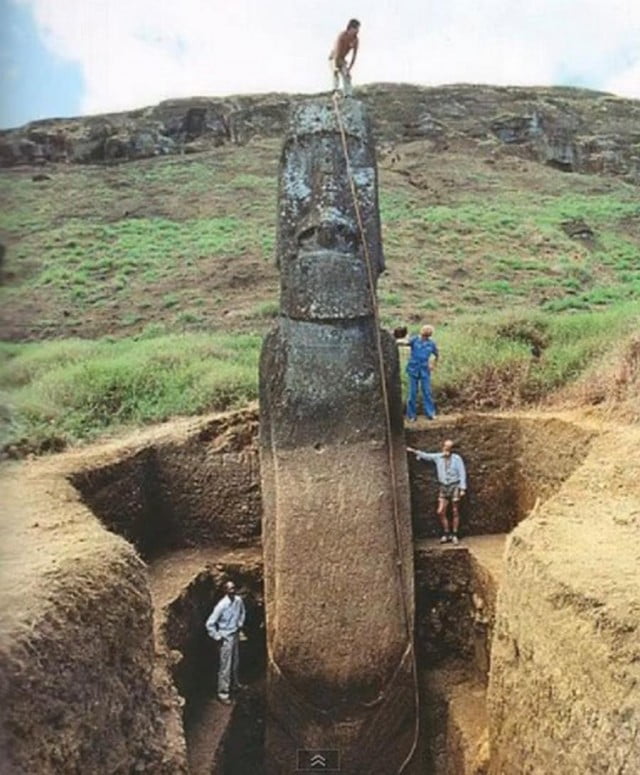 Indiana Jones may have exaggerated a little bit about the job, but you still get to dress like Alan Grant from Jurassic Park, travel all over the world and uncover some mind-blowing relics of the past.

Here’s 10 reminders of why this is the coolest career going.

1. That time they discovered the Easter Island Statues have Bodies There are over a thousand Moai monolithic human figures carved by the Rapa Nui people between the years 1250 and 1500 on Easter Island. Thanks to recent excavations, they are now believed not to have been buried by man, but by nature and erosion.

2. Being able to prove that Mouth Bling was around long before Hip Hop Ancient peoples of southern North America went to “dentists” to beautify their teeth with notches, grooves, and semiprecious gems. Mostly men opted for this look. This is not a mark of social class but meant for pure decoration. The early dentists used a drill-like device with a hard stone such as obsidian, which is capable of puncturing bone. The ornamental stones were attached with an adhesive made out of natural resins, such as plant sap. This was mixed with other chemicals and crushed bones. 3. Scanning a 1000 year-old Buddha statue to find out its actually a Mummy The mummy turned out to be the mummified body of Buddhist master Liuquan, who belonged to the Chinese Meditation School. It is not only the only one of its kind, but also the only Chinese Buddhist mummy that is available for scientific research in the West. Among all kinds of rotten material in the space where there had one been organs, he found paper scraps that are printed with ancient Chinese characters. From the NL Times.

4. Truly appreciating how easy we have it today Excavated in Iraq in 1927, this is an ancient Babylonian customer service complaint that was inscribed on a clay tablet sometime around 1750 B.C. And you thought calling up customer services was a pain in the butt. Ancient Greek Artwork dated to 100 B.C at the Getty Villa in Malibu shows what appears to be a Laptop computer with USB ports! Theories range from the Greeks being time travellers to having access to alien technology. It does make you wonder what is being depicted here. See it on Youtube.

Ancient astronauts proponents suggest that aliens came to Earth long ago, citing evidence such as Mesopotamian artefacts as proof of advanced technological influences. Believed to be around 2,000 years old, the jar was found just outside Baghdad and is composed of a clay jar with a stopper made of asphalt. Sticking through the asphalt is an iron rod surrounded by a copper cylinder. When filled with vinegar – or any other electrolytic solution – the jar produces about 1.1 volts.

6. Blowing your mind with questions like: “So Jurassic Park was Real?” On the right: Fossilized human AND dinosaur footprints, side by side and overlapping, as though one or the other was being stalked, discovered in Paluxy River in Glen Rose, Texas when a flood exposed rock with thousands of footprints. Read more about it here.

On the left: Prehistoric Cave Art depicting humans hunting dinosaurs discovered in Kuwait. “The carbon dating analysis revealed that they seem to relate to the earliest period of development of this settlement …These prehistoric pictograms seem to illustrate dinosaurs being hunted by humans…This could mean that humans are actually to blame for their extermination. This is certainly a revolutionnary new perspective and it will certainly be hard for many historians and archeologists to accept.” Read more from the report here.

7. Daredevil Digging in the Deep The Guy who Digs up Lost Cities buried at Sea:

For thirteen years, Frenchman Franck Goddio, pioneer of modern maritime archeology, was busy digging up a lost underwater civilization the size of Paris off the coast of Egypt. The remarkably well-preserved ruins discovered had been sitting at the bottom of the Mediterranean sea for the past 1,200 years, at long last solving the mystery of the lost cities of Alexandria’s ancient eastern harbour, Portus Magnus. Not bad for a day job. Stone Age “Highway” tunnels, stretching from Scotland, through Europe and into Turkey Just a few years ago, archaeologists found a new, underground network of tunnels built by people of the Stone Age:

Some experts believe the network was a way of protecting man from predators while others believe that some of the linked tunnels were used like motorways are today, for people to travel safely regardless of wars or violence or even weather above ground … chapels were often built by the entrances perhaps because the Church were afraid of the heathen legacy the tunnels might have represented, and wanted to negate their influence. In some cases writings have been discovered referring to the tunnels seen as a gateway to the underworld.

More via the Daily Mail and the Speigel Online.

8. All the Pretty Things While digging to put in electrical wires near Bulgaria’s Black Sea resort, a lost civilization was found that predates most well known civilizations in Egypt, Mesopotamia. This was a grave found dating to 5000 BC. The gold artefacts were older and richer than any others ever discovered anywhere. Read more about it here. A beautiful Greek mosaic uncovered in Turkey, thought to be 2000 years old.

9. The Dream of Finding another Tutankhamun The unbroken seal on the third shrine of Tutankhamun, 1924, by Harry Burton. Burton’s photograph of the treasury, a small room off the burial chamber in the tomb of Tutankhamun, is a classic image of discovery. Seeing the crouching jackal guarding the gilded shrine containing the king’s viscera, and the jumble of opened and unopened boxes and funerary equipment beyond, one feels the sense of anticipation that must have gripped Carter and his companions when they had first looked into this room. Howard Carter in the King Tutankhamen’s tomb. Photographs by Harry Burton, via the Met Museum. A pair of entwined skeletons were discovered in 1972 in Hasanlu, an archaeological excavation site in Iran, Western Azerbaijan, Solduz Valley. The Lovers’ as they are termed were estimated to have died together around 800 B.C. The skeletons appear like they are kissing each other before they died – as if to signify that love is eternal.

Why aren’t there more budding archeologists?

If you’d like to find out how to become an archeologist, there’s an interesting interview with one here.

This article is published with kind permission from messynessychic.com.